Wine Words: Natural Wines and No Pretense in a North Shore Paradise

Share All sharing options for: Wine Words: Natural Wines and No Pretense in a North Shore Paradise

Part of Food-Filled New England Day Trips Outside of Boston

Welcome to the inaugural edition of Wine Words, a series in which Eater Boston contributor Lauren Friel interviews some of the most interesting wine professionals in the Boston-area restaurant scene. 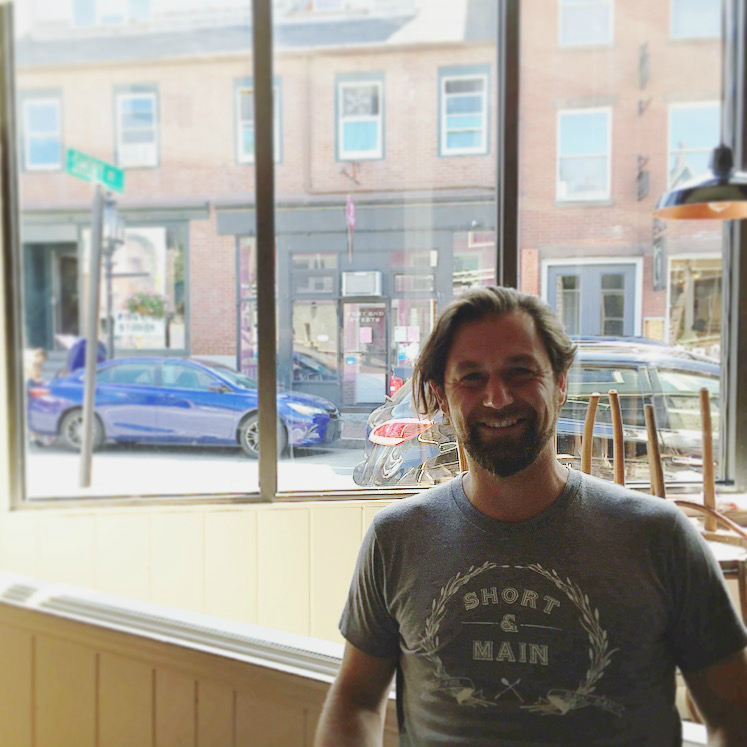 Howie Correa is pretty sure he was the last person on earth to find a job by answering an ad in a newspaper. "I think everything went to Craigslist immediately after me. It just gives you an idea of when this all started," he jokes.

It’s early morning in Gloucester, and we’re sitting in an empty Short & Main, the year-round pizza foil to seasonal seafood spot The Market Restaurant on Lobster Cove. Usually, this is the time of day when a restaurant’s blemishes show — when the curtain gets pulled back just a little without the benefit of warm lighting and convivial chatter. But even with full morning light pouring through the windows, Short & Main maintains that cool West Coast neighborhood vibe. Even empty, it feels like your best friend’s dining room.

At least some of this has to do with the presence of Correa, sommelier and working partner, who greets me at the door with damp hair and a hug, not a handshake. He ushers me inside, sits down, and apologizes for nothing in particular. "We had friends in this weekend," he explains. "Lots of late nights; lots of wine."

We might be sitting on a corner in the postage-stamp downtown of a working class New England fishing mecca, but it’s undeniable that Correa is at the helm of what seems to be realized restaurant utopia. Currently, he’s in charge of the beverage programs for two of the most beloved spots on the East Coast, both boasting charming locales, effortless spaces, and — let’s be honest — a staff whose physical beauty tends to be just as alluring as the food.

Perhaps most impressive is that after six years in business with local and national accolades, Short & Main and The Market Restaurant still feel like well-kept secrets, maybe due in part to their disinterest with keeping up with trends. "We’re lucky that we’re sort of in a vacuum out here in Gloucester," Correa says. "We can be confident and serve what we want, not because we have to or because it’s what people ask for, but because it’s what we believe in."

Seaside Shangri-La aside, we all start somewhere. A Sacramento native, Correa started with that newspaper ad — a listing for a job at Town Hall, a San Francisco restaurant with a wine list that went deeper than the local Cabernet fare. From there, his resume reads a bit like a Bay Area greatest hits list: stints at Chez Panisse, Delfina, and Bar Tartine, the aggregate impression left on him being that drinking culture could be a way to connect that we don’t often consider.

A drinking culture that's not about taking shots at the bar

"There’s joy and conviviality, that little bit of hedonism, making the best, and enjoying what you have with friends," he says. "It’s not about taking shots at the bar." Looking to learn more than he could find in a dining room, he headed to Sonoma and joined up with Scribe, a boutique winery determined to break away from the usual suspects. "What I loved about them was that they weren’t trying to tell you what they were. They were saying, ‘Let’s make a dry Riesling; let’s see what that’s like.’ It was new."

It’s true that Correa only landed permanently on the East Coast three years ago, but the wine lists at both Short & Main and The Market lean markedly away from his West Coast roots. It seems, in fact, that his love for wine developed largely in spite of his proximate residence. "In California, you’re very much aware of the wine industry in one way or another," he says. "You can’t ignore it. Monoculture is everywhere. There’s an environmental degradation associated with some of those practices that I have no interest in contributing to." He credits his years at Chez Panisse with helping him understand what responsible agriculture looks like and the ways in which it can contribute to a community.

Appropriately, then, the majority of the wines served at both restaurants are small-production and naturally made, though he’s up front about the challenges of selling natural wine on the North Shore. "I try to take the pretense out of it," he says. For him, staff involvement is a large part of the pretense antidote. "Our servers taste every bottle, so they can talk to guests about what they love and what they’re excited about. Hopefully, that brings some humanity back to what we’re doing."

"If you want to sell natural wine, just smile more"

"If you want to sell natural wine, just smile more," he jokes, but there’s some method to the niceness, too. Short & Main offers a rotating glass-pour-only selection, and at The Market the list is limited to one page. Larger lists just don’t suit the restaurants’ concepts, and it’s not necessarily great from a sales perspective, either. "If someone’s handed a huge wine list — unless they’re really into wine — they’re going to go for what they know. Then you’re just selling Sancerre all the time."

Correa also leans on the easy joy he finds in bottle-fermented Italian bubbles, in particular the Fondo Bozzole ‘Incantabiss’ Lambrusco. Owing to the nature of the food, there’s a strong Italian showing on the list, but he loves the wine for more than just its provenance. "You can give that wine to someone on a hot summer day, and they’ll say, ‘This isn’t the big red wine I was looking for, but it has everything I want, and it’s so refreshing.’"

That spirit of generosity, of wanting to inspire guests but comfort them at the same time, runs deep in these dining rooms, and it’s emanating at least in part from Correa. It’s undoubtedly an inherent characteristic, but there’s something he mentions about visiting winemakers abroad that speaks to the same attitude. "The farmers don’t have a lot, and they say, ‘We work hard,’ but it’s never a complaint. It’s just a factual statement, like, ‘This is what we do. We’re happy doing this.’" At some point, it seems, that spirit rubbed off on him, or maybe he swallowed it whole. His face — deeply tanned for a restaurant worker — seems to be a physical manifestation of this salt-of-the-earth idea, and his explanation for a long, successful tenure in this famously draining industry gives it away completely.

"This can be a glamorous position for some people, but for me, it’s still about putting boxes away. Every year there’s this plan like, ‘How are we gonna get Howie some help?’ but it doesn’t happen. I need to be here, lifting boxes. This is what I need to do."