Can Great Barbecue Come From the North?

Share All sharing options for: Can Great Barbecue Come From the North?

When it comes to New England cuisine, most people think of dishes like lobster, clams, oysters, and baked beans as the trademarks of the area, but there are plenty of chefs who are cooking beyond stereotypical New England fare. The IQUE BBQ team, for one, is repping New England, traveling to barbecue competitions all over the country and proving that good barbecue doesn’t only come from the South.

Hart and Husbands started the team in 1997 while they were working at East Coast Grill in Cambridge. "We started up IQUE after attending a barbecue event while working with [ECG founder] Chris Schlesinger," Hart says. After noticing how competition-level pitmasters tended to their ribs and brisket to create the ideal piece of smoky, juicy, meat with the perfect texture, Hart and Husbands decided to challenge themselves to create barbecue just as delicious. 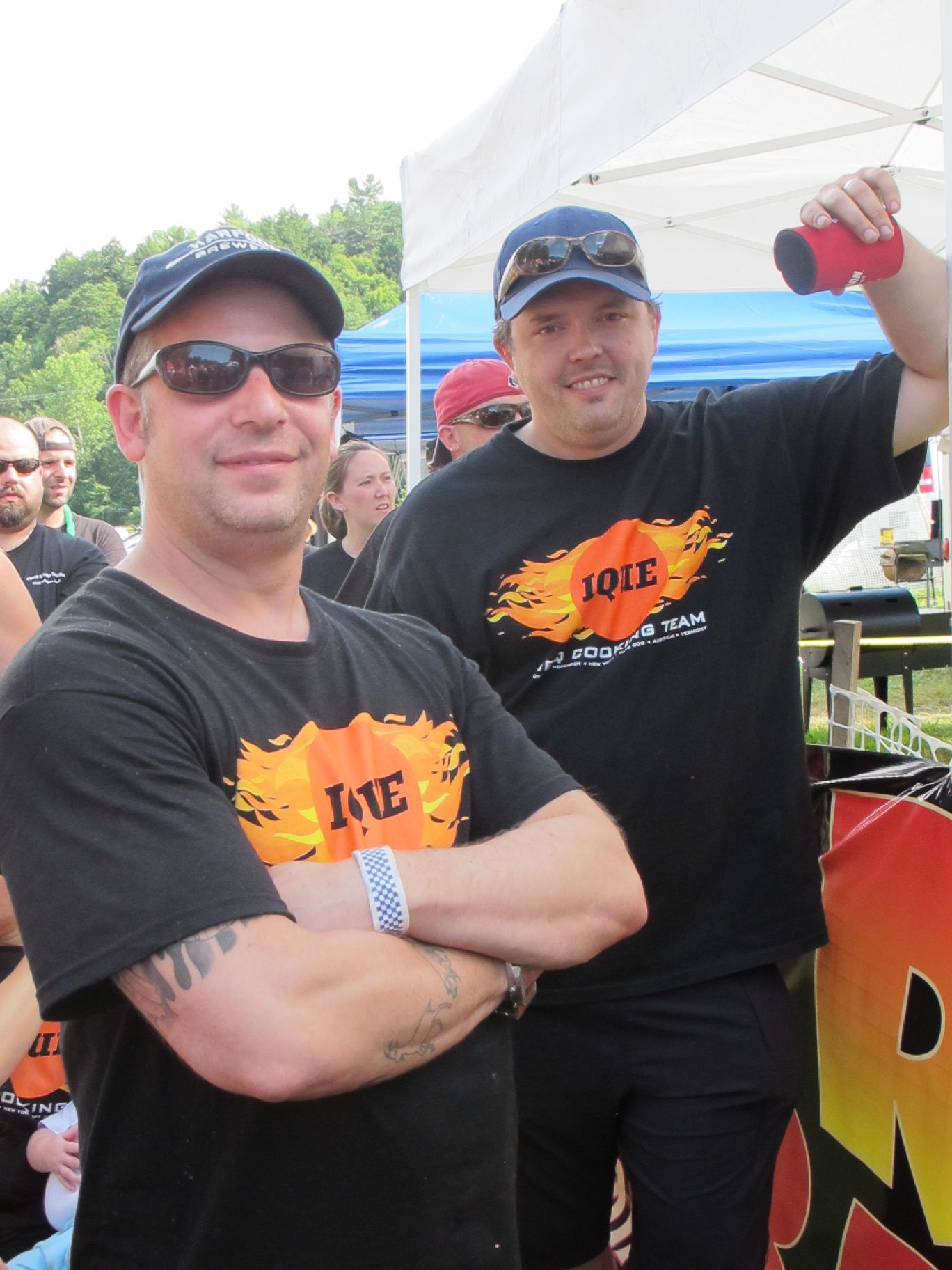 "We saw a lot of barbecue guys spending the weekend not churning out massive amounts of meat like we were accustomed to while catering, but babying a couple racks of ribs or a single brisket to achieve barbecue nirvana for a contest," says Hart. That pursuit of barbecue perfection, plus the excuse to spend the weekend in a field drinking out of a red cup, had us hooked." Hart came up with name IQUE after realizing that it signified what the team was all about. "The name represents what we do...I ‘QUE."

After starting the team, Hart and Husbands began practicing, spending hours cooking all kinds of barbecue. "It may sound funny, but we needed to train," says Husbands. "Hart challenged us and pushed us, and we practiced a lot." The team traveled across the country, entering championships and putting their skills up against some of the best barbecue teams around. Delpha joined the IQUE team in 2006.

"They invited me to come up to the Harpoon Championship of New England BBQ," Delpha remembers. "I hopped at the chance to do that, and after that, I was hooked." In 2009 he and the team travelled to the Jack Daniel’s World Championship Invitational Barbecue in Lynchburg, Tenn. and became the first team from the Northeast to take home the top prize for barbecue in the championship’s history.

Being Northerners means getting the occasional taunt from Southern barbecue teams. "At the Kansas City Royal competition, we did get a bit of ‘What do you know about barbecue; you’re from the north,’" laughs Husbands, but he’s not mad about it. "I get it. People are so protective of their culture and heritage," he says. You’d be hard-pressed to find a cuisine as protected and revered as American barbecue. Barbecue is not just a Southern tradition but a cuisine with regional differences that chefs defend and uphold with intense passion. North Carolina-style barbecue fans will defend that region’s barbecue against other regions like St. Louis, Memphis, or Texas — and vice versa. So, where does that leave IQUE, a team from New England, a region which has no stake in the world of barbecue?

Husbands, Hart, and Delpha are all quick to point out that they do not consider their barbecue to be of a place or a specific genre of barbecue. "We are not bound by the traditions of a specific region, but we spend a lot of time cooking traditional barbecue, in the style of central Texas, North Carolina, and Kansas City," Hart says.

For Husbands, it’s important to know the history of barbecue and the regional differences in order to truly honor it. "I’m a student of history, and I love that aspect of barbecue," he says. "I wouldn’t call my ribs Kansas City-style, but there’s some of that in there."

Barbecue is inherently a local cuisine

One could argue that since the IQUE team doesn’t live in the South, they’re not bound to any regional variation of barbecue since barbecue has historically always relied on the meat and wood available in the area where it’s cooked. "Barbecue is inherently a local cuisine, and people use what’s around them to create it," Husbands says. "In Texas there’s a lot of cattle, so there’s a lot of beef barbecue, naturally."

When IQUE travels to competitions, they bring a mixture of oak and hickory wood from New Hampshire, which imparts a different flavor than peach wood or apple wood, which you would find in Southern barbecue. In a way, being from New England and being "outsiders" of the traditional barbecue regions has given IQUE freedom when it comes to creating dishes for judges at competitions.

"I don’t have to be pigeonholed into making a certain type of barbecue like if I was in Lexington, N.C.," Delpha says. The "chef’s choice" dish that he made at the Jack Daniel’s World Championship in 2009 wasn’t a traditional barbecue dish. That dish — barbecued short ribs with celery root, gruyere popovers, and a potato gratin — had many different influences, but it still helped the team win the title. For Delpha there’s a "spirit" of cooking barbecue that is present when cooking anything "low and slow." If you do that, you’re still "following tradition," he says.

Master the standards, then get creative

"We feel you can't really get super creative until you master the standards," adds Hart. "We have spent the last 20 years cooking the barbecue standards and more recently developing mashups and ethnic influences on certain dishes and making them our own."

At Husband’s new restaurant, Smoke Shop, which is slated to open June 24, he’s mashing up those traditional flavors and cooking techniques with worldly ingredients. Diners can expect to see dishes like pulled pork banh mi and brisket with kimchi and gochujang sauce, as well as barbecue classics. "If you like American barbecue — like St. Louis-style ribs, pulled pork, chicken, brisket — you’ll find that on the menu too," he says.

Delpha says that his education in barbecue also influences his menu at Rosebud. Currently, the menu has dishes like St. Louis ribs, smoked chicken wings, and a barbecued pig’s head that all speak to his experience in barbecue competitions and the time he spent in the South in the military. "I was stationed in Alabama, and then Georgia, and that’s when I got my first taste of barbecue," he says. When not traveling with the IQUE team, he and his wife, a former Olympic fencer, travel to barbecue competitions in the Northeast.

What does the future hold for IQUE? Hart says that right now, the team has been working on writing cookbooks, but they will eventually get back into the competition circuit. (Husbands and Hart released the book Wicked Good Barbecue, written with Andrea Pyenson, in 2012.)

"The future for IQUE is to get out and cook more contests and add a second world championship to our resume." And to show that good barbecue can come from a team in the North.