Share All sharing options for: Neat & Greet: Mezcal With Brother Cleve at Audubon

Apparently Cleve and I are beginning to make a sport of going out on nights commonly considered "amateur" drinking holidays. It didn’t dawn on either of us that it was May 5 until we walked into Audubon near Kenmore Square. Bar manager Tyler Wang was holding down the long 25-seat bar with his co-bartender, Kiri. The crowd was lively, and the atmosphere was festive but not overwhelming. People who didn't know each other when they arrived were having friendly conversations and engaging with us as we stood behind the bar stools, pondering the spirits menu. Feeling this welcome before you even get a drink is a testament to the staff at Audubon, their hospitality, and their ability to throw a party.

Cleve and I decided to drink mezcal in honor of the "holiday" since we had tequila last time we met. I love agave spirits, as does Brother Cleve, but we promise to drink something from grape or grain next time we go out!

As we waited for our Del Maguey Tobala and Pacificos, Cleve started telling a story about his first bartending job, which happened to be across the street from where Audubon is located. It was the second location of The Hoodoo Barbeque, which originally resided in the legendary Rathskeller until 1987. In 1988, Brother Cleve came off of a three-year tour with the Del Fuegos and was out of a job. James Ryan, who owned the Hoodoo, asked him if he wanted to be a bartender, since he was obsessed with "all those old cocktails."

I asked Cleve if he made a cocktail list for his new gig. I should have known the answer — bars just didn’t have lists back then. Cleve said he did things like a Sidecar, a Negroni, a Manhattan. No one ordered them.

During the '60s, '70s, and '80s, cocktail menus were almost never available in bars and only really existed in restaurants. Cleve recalled that they all usually contained the same 10 or so drinks, and one of those drinks was often the Ward 8. This surprised me. Does that mean that they had fresh juice on the bar back then, or were they using sour mix? 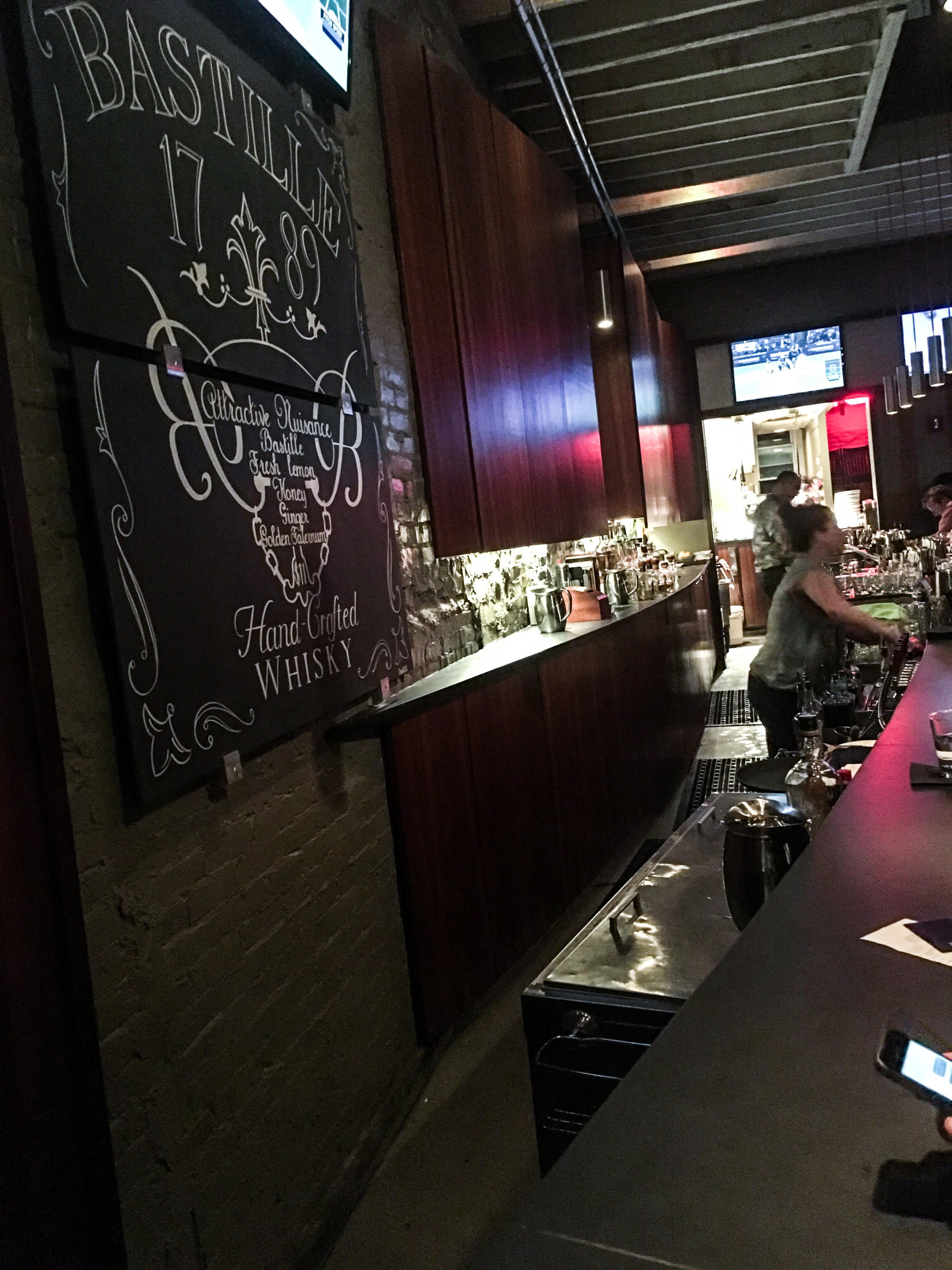 They might have used fresh juice, at least until the '70s, when sour mix became popular, Cleve replied. This made me think back to when I first saw someone use cut fruit from the garnish tray to make a Cosmopolitan. Though Rose’s Lime was often the standard in the Cosmo’s heyday (though it was originally created with fresh lime), a few inventive bartenders found that using whatever they fresh ingredients they could get their hands on vastly improved the cocktail.

Cleve mentioned one night when he and The Millionaire (founder of the band Combustible Edison) were in a bar in Austin where fresh juice wasn't available. They ordered Tanqueray, Chambord, and lime wedges and made themselves an on-the-fly cocktail. Once Cleve was back in Boston, the resulting cocktail, dubbed El Splendido, became one of the most popular cocktails on the B-Side menu.

It seems that since the era of the B-Side, cocktail menus are now a huge part of the way a bar defines itself. There are only a few notable exceptions to the rule that cocktail bars usually have a menu nowadays, and more often than not it is clear that a lot of thought and work went into it.

The menu at Audubon is succinct but extremely inventive and fun. Brother Cleve and I agree that coming back for a cocktail in the near future is a given.

That being said, the Del Maguey Tobala is amazingly delicious. Truth be told, it is one of my favorite spirits, probably top five. Cleve remarked that it is one of the finest, richest, smoothest mezcals he’s ever had. If you’ve never had Tobala, it is worth seeking out. All I managed to write down was: "Herbal, vegetal awesomeness. Butterscotch yum!" 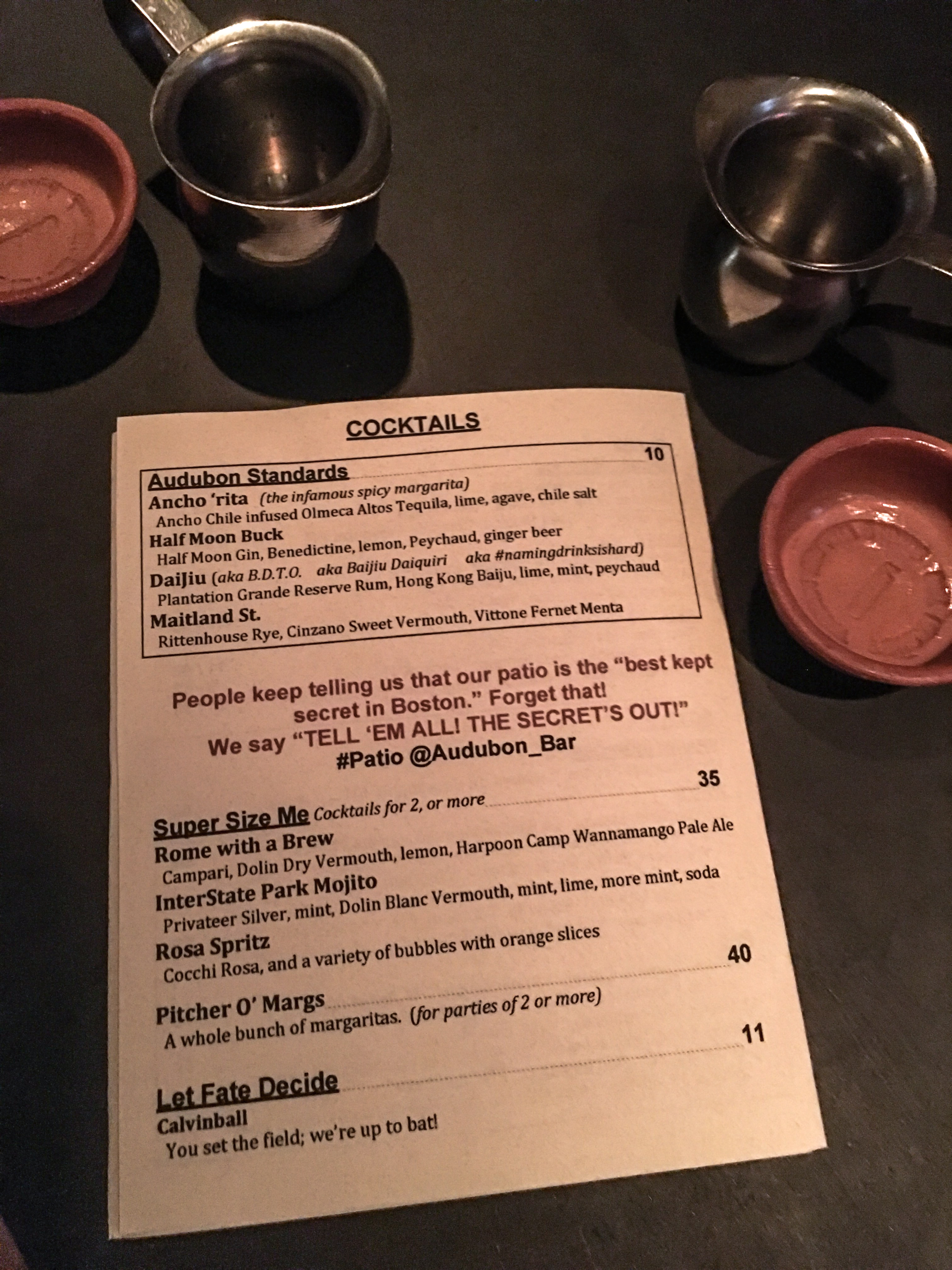 Mezcal is such a varied category, and the best of the best honor the traditional way of making the spirit. On a day like Cinco de Mayo, when the real message of what we are celebrating or drinking can get lost, I think it’s important to mention the efforts of The Tequila Interchange Project. This group of people — which includes bartenders, researchers, educators, consumers, and enthusiasts — works to place a renewed emphasis on the importance of preserving the great heritage of agave distillation in Mexico. I highly recommend looking at what they are doing and getting involved.

As a bonus, and because Cleve and I couldn’t help ourselves, we tried two of the Sotols that Tyler had on the menu. Sotol is a spirit distilled from a plant that grows in the northern part of Mexico and is commonly referred to as Desert Spoon in English. The first, Por Siempre Blanco, was extremely spiced, peppery, with some vanilla notes. It had a very long finish that seemed to switch from spicy to earthy, into fruity, and back to earthy soil flavors. The second, Hacienda de Chihuahua Blanco, was much funkier, though it was sweet on the nose. It started fruity and got vegetal as we sipped. It had a heat blast mid-palate and then a bubblegum quality. Compared to the Por Siempre, it was like Agricole would be to rum.  One thing the two had in common is that they definitely morphed as they mellowed in the glass.

It will definitely be hard to top this year’s Cinco de Mayo celebration, drinking traditional Mexican spirits in the company of one of Boston’s most knowledgeable bar minds in a beautiful bar with extremely hospitable and fun staff. I guess we’ll just have to make it a new tradition.