The beer-focused bar has taken over the former Stadium Bar space.

Share All sharing options for: The Ginger Man Opens Soon Near Faneuil Hall 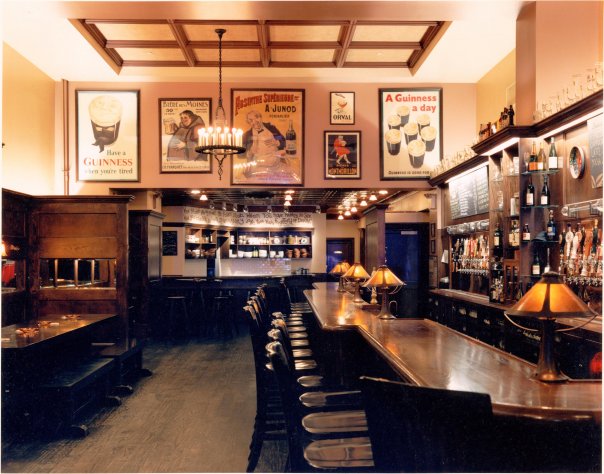 After five months of renovations, The Ginger Man expands to Boston this month with the opening of its first area location at 148 State St., the former home of Stadium Sports Bar & Grill.

The Ginger Man is slated to open its 149-seat comfort-food and craft-beer restaurant in mid-March, and it will feature two floors; a variety of booth, banquette and lounge-style seating; and a private tasting and event space. The Ginger Man also has one other location in New York.

In 2012, the restaurant was on the hunt for a Fort Point space, and again in 2014, but according to Ginger Man director of operations Alex Silberstein, those locations fell through. The former Stadium space became available in fall 2015, and owner Bob Precious jumped at the chance to take it over.

"Quite frankly, we’re happy with this location," Silberstein said. "Being right next to Faneuil Hall, we think we’ll get a lot of foot traffic — whether that’s tourists or locals."

Silberstein said that he and general manager Andrew Hoenig are expecting lively lunchtime and after-work crowds, thanks to nearby tourist attractions and the restaurant’s proximity to the Financial District. The Ginger Man will offer customers 75 draft beers (as well as an additional 15 draft lines at its smaller, downstairs bar), nearly 100 bottled beers, and spirits and wines from across the globe. And while the restaurant was granted a 2 a.m. closing time, Silberstein stressed that they are more focused on creating a space for personal interaction than one for late-night revelry.

"We’re very much a public house, so we’re trying to give our customers and guests an atmosphere in which they can enjoy really great drinks, great food, and conversation," he said.

Since September, the restaurant’s management has completely renovated the space, installing custom-built bars and booths and repairing the historic features of the building.

"We made repairs to some marble staircases, but otherwise, everything else that was put into place before we came in was removed," Hoenig said.

In addition to its warm and welcoming bar scene, he and Silberstein said they also plan to eventually use the building’s original vault room, featuring turn-of-the-century details and authentic safety deposit boxes from when the structure served as the Fidelity Trust building, for special events, beer tastings, and food pairings.

For the menu, Silberstein said he hopes to "turn up" customers’ preconceived notions about comfort food by making as much of the menu in-house as possible. They plan to make their own bread, charcuterie, pickles, and smoked meats to provide a genuine craft-made atmosphere.

"As much as we possibly can do here, hand-made, we’re going to do," Silberstein said.

The pair hopes The Ginger Man will bring a fresh and spirited new option to Faneuil Hall and the Financial District, with a distinctive focus on comfort.

"We’re very excited to be coming into the neighborhood and to bring our enthusiasm for craft beer and great food in an area that may not have as many as those options," Silberstein said.

[Photo: The Ginger Man in NYC/Facebook]

CORRECTION: An update has been made to clarify that The Ginger Man restaurants in Boston and New York are no longer affiliated with the restaurant group by the same name in Texas. Bob Precious first opened The Ginger Man in Houston in 1985 and ultimately opened five locations in Texas before moving to New York in 1996 and opening that location, followed by two in Connecticut. More than a decade ago, Precious sold the Texas locations as well as the naming rights west of the Mississippi River; eight years ago, he also sold the Connecticut locations.

UPDATE: The opening date has been pushed back a couple of times, and the article has been updated accordingly. It's likely the restaurant will open in mid-March.