Share All sharing options for: The Haven: Five Years as Boston's 'Scottish Headquarters'

Shortly before opening The Haven in the former Zon's space in Jamaica Plain's Hyde Square in summer 2010, there was one question owner Jason Waddleton heard a lot: "You're not going to sell haggis, are you?" And that was when he knew that he had to serve haggis. "That's why it's a great idea," he said recently, while reflecting back on the restaurant's first five years. "Because people have a strong opinion about it." 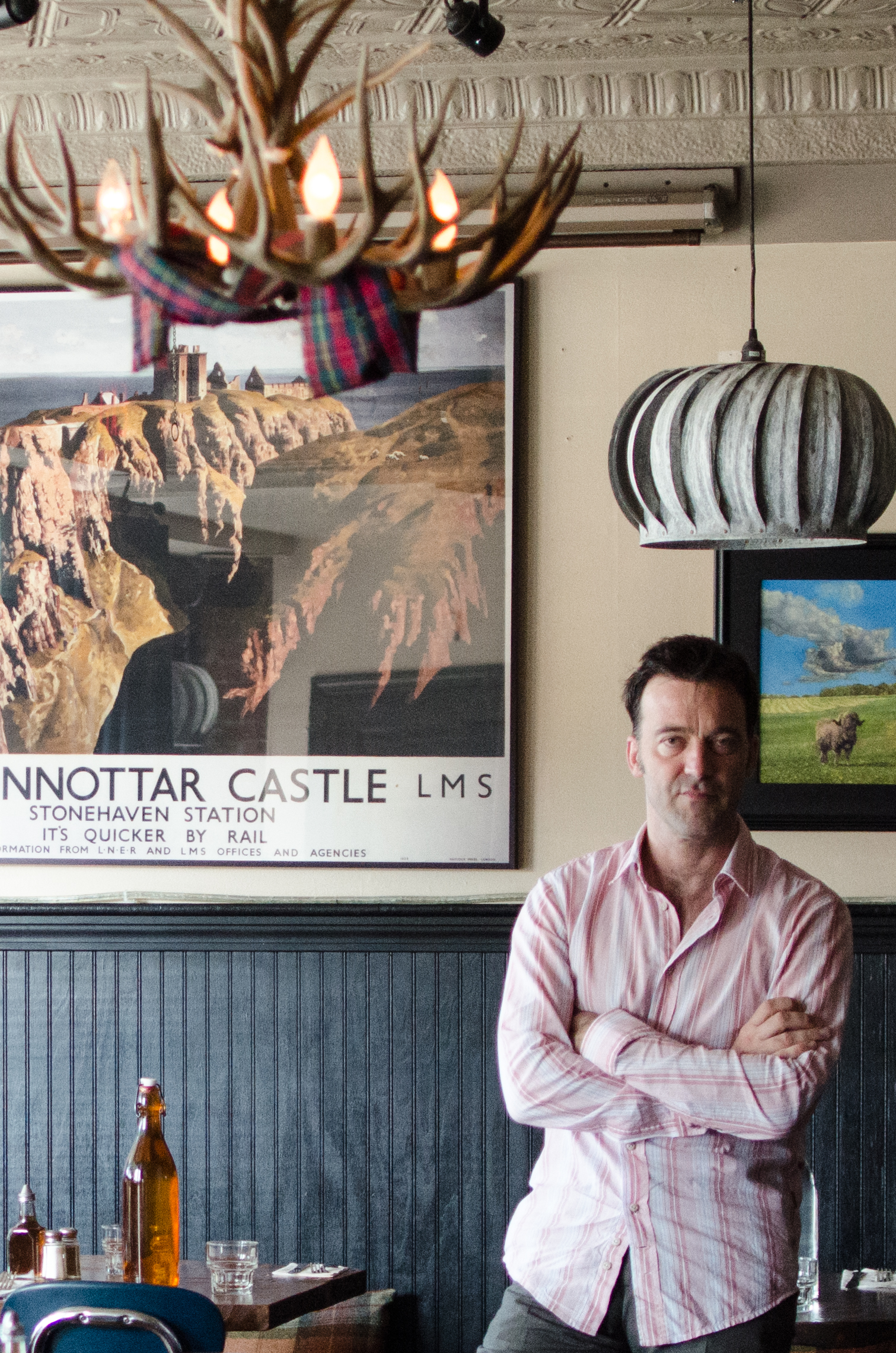 "There's this interplay over a dish, which is hilarious," he continued. "I don't know many dishes that can create that level of interest or harmony or disharmony at the same moment."

As Boston's only Scottish restaurant, it's fitting that The Haven would serve such a distinctive Scottish dish. Traditionally, it's a blend of a sheep's heart, liver, and lungs, mixed with various seasonings and other ingredients, encased in the sheep's stomach. The FDA frowns on the use of lungs here in the United States, though, so The Haven's recipe has to differ a bit.

In addition to the United States-friendly version of standard haggis, Waddleton is "always looking for ways to have an entry to haggis that isn't just the traditional serving of haggis, neeps, and tatties." On trips back to Scotland, he's seen Indian restaurants serving haggis pakora, which he has tried to serve at The Haven, but it "wasn't the rip-roaring success" that he had hoped. Customers here don't necessarily get the "Indian-Scottish cuisine connection," he said. "They're seeing battered, deep-fried haggis, which may not really appeal to a lot of people; in the grand scheme of things, it's maybe a harder sell."

One thing that's not a hard sell? The burger, of course, because Boston is obsessed with burgers. The Haven's version, developed by Waddleton and opening chef Ben "Wax" Waxler, features Huntsman cheese, bacon-onion marmalade, and pickle sauce. It's the restaurant's best-selling dish, and it has scooped up a variety of press mentions, including a widely shared November 2014 Buzzfeed listicle on "21 Juicy Burgers That Will Ruin You For All Other Burgers."

Waddleton's favorite dish, though — and another high-seller (even in the hotter months, which surprises him) — is the white pudding sassitch and mash, which features house-made chicken sausage with kale, carrots, herbed mash, and mustard gravy. "It's intriguing, it's an easy one to share, people get it," he said. "We can't take it off the menu."

It doesn't feel like it's been five years, Waddleton said — "and yet again sometimes it really does. It think it depends what day you might ask me that question. You live it and learn from it in that space of time that flies by." He vividly remembers opening day; "seems like yesterday." He opened the doors one afternoon without telling anyone and put the World Cup on a projector, the United States versus England.

"We managed to get some kegs in, poured the first pint, and people started walking in. Before you knew it, it was full. It was like the zombie apocalypse. We'd opened, and people walked in. It was a really weird feeling, seeing people all in the room. You feel like you're not prepared for it, and from that day on, it's just boom boom boom. Onwards and upwards, you know?"

It took a little bit of renovating to turn Zon's into The Haven. What is now the bar area was actually an office and a corridor, and Zon's bar — smaller than The Haven's — was at the front of that half of the restaurant, by the windows, where there are now a couple of big tables with cozy bench seating and pillows. Waddleton wanted to open the space up, and it has really worked well for events, which can be held on the bar side or the dining room side. That way, he doesn't have to shut down the whole restaurant — and charge people "an arm and a leg" — to host private events. 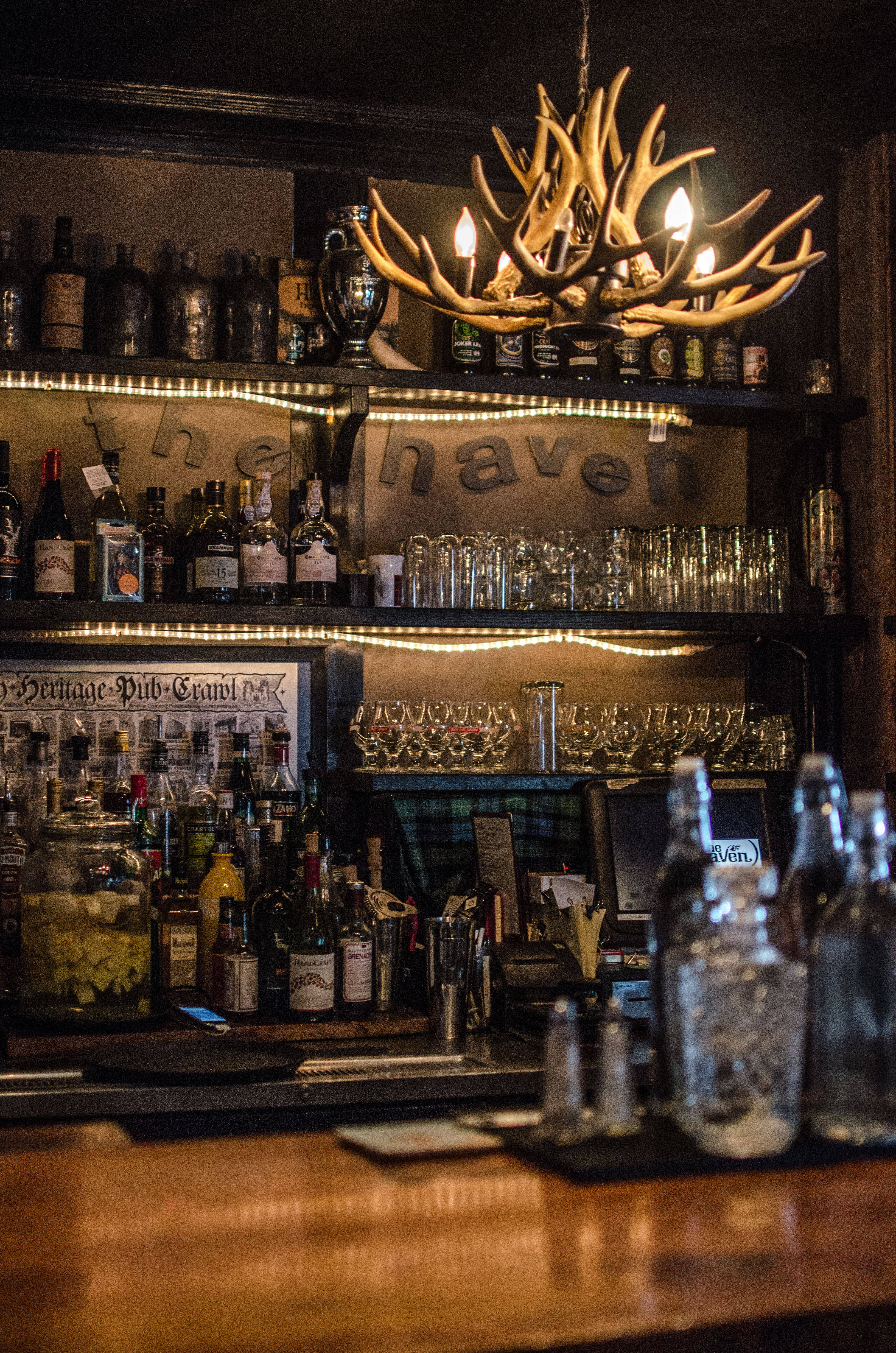 Prior to opening The Haven, Waddleton was making his mark at Matt Murphy's Pub in Brookline Village, cultivating an iconic music program still missed by former regulars. "I was deeply involved in the music part of things there, and that's linked in to what I had been doing back in the UK," he said. "That's where my background was, as well as always working in restaurants, so it was a combination of the two, and it was great."

While there, he began to think about opening his own place. "When I first started looking, it was kind of with the view to do a music-related venue, which is still in my mind, to be honest. But then as I looked around Boston and certain spaces cropped up, and you look into how to adapt your idea in that space...Zon's came up, and it's not a music venue performance space." (That's not to say there's no music at The Haven — there's plenty, including Scottish fiddling — but it's not the focus of the concept.)

Once he saw the space, Waddleton started thinking more in the vein of "Scottish food and Scottish ideas and Scottish beers," and at that point, "it didn't need the music side of things," he said. "It was really weird how as I went forward with looking at spaces, it steered away from just a music thing to just being food with a little bit of music."

The Scottish concept has been working out quite well. The Haven has ended up serving as "a conduit of Scottish events in Boston," said Waddleton. "Scottish headquarters, if you will." The Scottish independence referendum of 2014 stands out in his mind. People flooded into The Haven to watch news coverage of the referendum — and meanwhile, The Haven itself became the news coverage throughout New England media as it served as "America's conduit into the referendum."

"It was kind of a twisted, weird thing that happened, that you become part of the story," said Waddleton. "It was very strange, but it was a beautiful moment. In JP, people seemed to love the political aspect, the kind of freedom moment — or the intrigue of that. People came in with their kids with St. Andrew's flags painted on their faces, and it was amazing."

Lots of memories stand out to Waddleton from the five years, many surrounding events. There were the "ridiculously well-received" Game of Thrones nights, for example, featuring Ommegang's special beers and recipes from the A Feast of Ice and Fire cookbook. And there was The Fireballs ceremony, an homage to Stonehaven, a town on Scotland's northeast coast.

In fact, The Haven takes its name from a fish and chip shop once called The Haven Chip Bar (now called The Carron) in Stonehaven — the reputed birthplace of the deep-fried Mars bar. "It's a tongue-in-cheek nod to the reference of Scottish cuisine no doubt at its best and worst," said Waddleton. "Making fun of itself, if you will."

Waddleton would love to open another place eventually. ("Who doesn't want that?" he said.) The dream of doing something more music-oriented is always in mind, or perhaps a restaurant that highlights more of the UK. "There's so much good beer and food from the rest of the island." (Going along with the Scottish theme, The Haven's beer program is fully Scottish, aside from one local draft cider, typically Bantam or Downeast. Waddleton does offer Scottish bottled ciders, though.)

Nothing concrete is in the works, but there are so many neighborhoods that interest him, from Somerville's Union Square (where he was originally searching before landing on the Zon's space in JP) to Cambridge's Central Square.

In the meantime, find Waddleton — and pretty much any Bostonian with any connection to Scotland — hanging out at The Haven to watch sports, listen to music, drink great Scottish beers, and eat white pudding, haggis, and more. There are events galore, including regular Kilt Nights ("a full-on, in-your-face Scottish event, for better or worse," said Waddleton) and annual Burns Nights.

For first-time visitors, try the "Taste of Scotland" four-course tasting menu ($30/$25 for vegetarians, available Sunday through Thursday) to get a good overview of The Haven's culinary offerings. "We kind of cheat a little bit" on the concept of a tasting menu, said Waddleton, noting that there's some flexibility — guests can "stipulate to a degree what [they'd] like to taste. If you come in here saying you really want to taste the duck breast, we're going to do that for you." Beer pairings are available as well.

Even for guests who shy away from haggis or deep-fried Mars bars, there's a little bit of something for anyone who's curious about Scotland — or looking for a taste of home.