The Obadiah McIntyre Farm Winery at Charlton Orchards burned to the ground this week in an apparent act of arson. 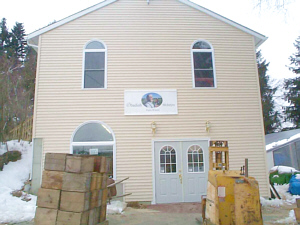 A fire blazed at 44 Worcester Rd. in Charlton on Sunday night, and it destroyed a 15-year-old winery and 4,000 gallons of wine. Yesterday, the Boston Globe reported officials determined the fire was an act of arson.

"All other potential accidental causes in the area of origin have been eliminated," State Fire Marshal Stephen D. Croan's office said in a statement.

Charlton Police Chief James A. Pervier, whose office is jointly investigating the fire with the Central Massachusetts town's fire department, state fire marshals and state police, said they haven't identified any suspects yet.

Nathan Benjamin, the third-generation owner of the farm, launched the winery in 2001 and said it is the main source of his family's income. The winery "helped diversify and sustain our family farm by putting us on the map as someplace special," he writes on a GoFundMe campaign page. Benjamin co-owns the farm with his wife; the family is trying to raise $100,000 to cover the losses from the fire.

"As most people know, farming is a hard way to make a living and each year with more and bigger farms producing fresh fruits and vegetables, small local family farms like ours are slowly disappearing," he wrote.

The local police chief said the fire is "a tragedy ... It’s just sad, no matter what we ultimately find out. You can’t rebuild what was there."

Benjamin told the Globe he doesn't believe his farm was targeted by the arsonist, but that it was "an act of evil."

The farmstand and pick-your-own orchards were unaffected, though, and are open normal hours, according to the company's website. Benjamin is currently considering "starting over again" and making wine at a neighboring winery to sell at his store. A page on the Charlton Orchards website indicates the family has been trying to sell the property; it isn't clear whether the sale is ongoing in light of the recent tragedy.

Officials are asking anyone with information about the fire to call the Arson Hotline at 800-682-9229 to leave a confidential message. There are rewards of up to $5,000 available for useful information.