Dylan Welsh and the Hawkeye Hospitality Group share some details about their forthcoming South Boston concept.

Share All sharing options for: Worden Hall Opens This Month With Approachable Food and a Penny-Topped Bar

By the end of this month, Worden Hall will land at 22 W. Broadway, directly across from the Red Line entrance on that street, as "the welcome mat to South Boston."

Dylan Welsh laughed a bit when that phrase was brought up again. The restaurateur and his managing partner, Dan Henn, added it into early job listings as a way to set apart their ad. "I do think of this bridge and West Broadway as the entrance to South Boston. We just came up with that, to kind of have a little fun ... If you don’t want to have fun in this business, you shouldn’t be in this business," Welsh said. 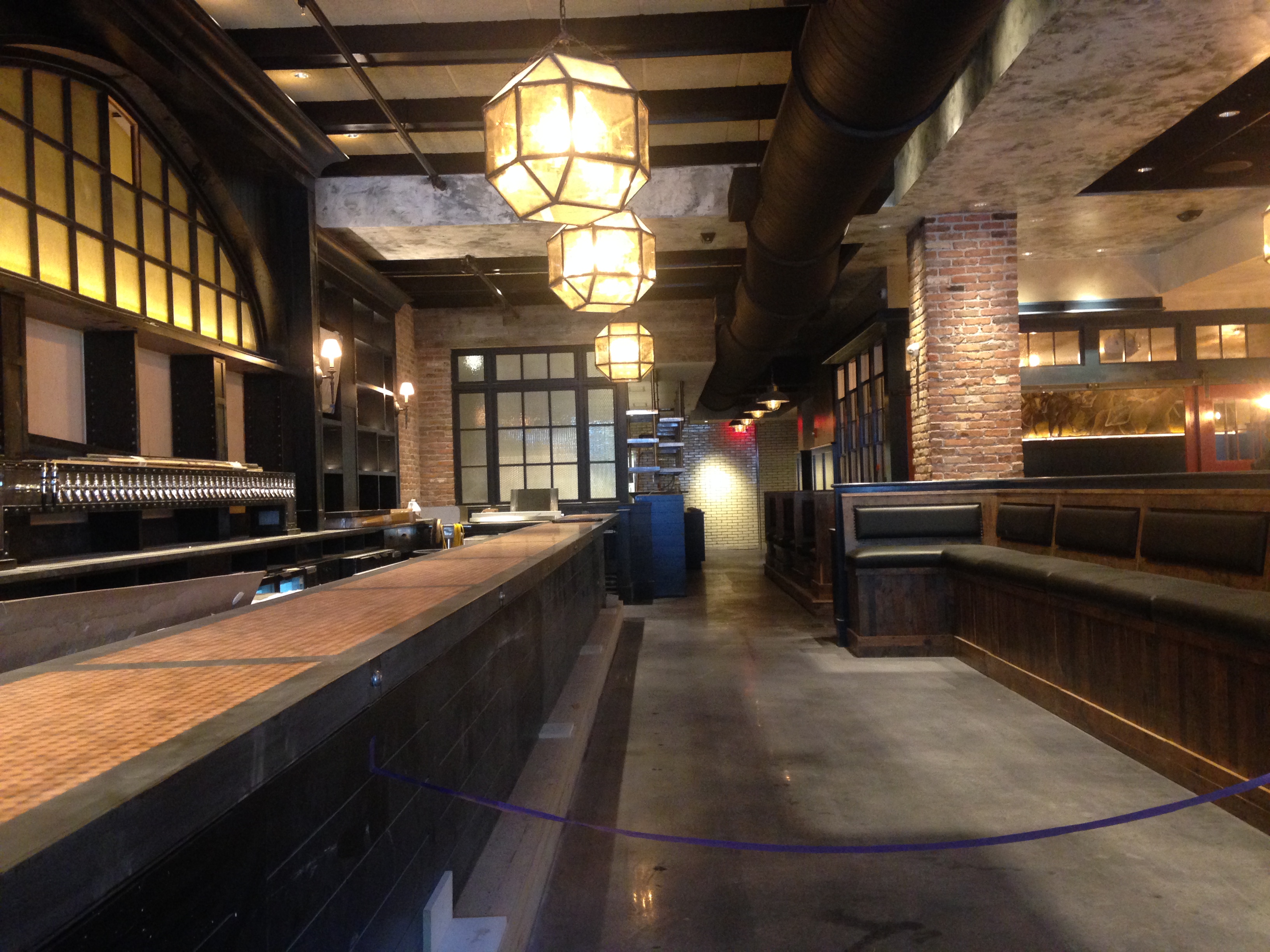 One of the most fun elements of the brand-new restaurant is the 28-seat bar top, meticulously laid with 12,960 bright, copper pennies. While Welsh hired someone to create the piece, he, Henn, and their significant others spent a full day’s work sorting out and polishing about $130 in shiny pennies.

"The last box we opened was all brand-new pennies," Henn recalled.

Welsh added, "I can’t describe the satisfaction of opening a full roll of shiny pennies after that day."

In the front corner of the bar top, amid the alternating heads-and-tails pennies, an astute bar patron may notice a coaster from the Worden Hotel in Saratoga Springs. The now-gone historic landmark, which stood on the corner of that upstate New York city's Broadway and Division streets for nearly a century, was a gathering place for tourists, locals, and celebrities alike, said Welsh, a native Saratogian.

The city has a storied history as a tourist destination, largely thanks to being home to what many consider the oldest sporting venue in the country, a thoroughbred horse racing track. Welsh worked at the race course for 15 years, and he has four brothers — hence his original restaurant concept, Five Horses Tavern, with locations in Somerville's Davis Square and the South End.

But as he envisioned his third venture, Welsh wanted to "raise the bar in terms of design and layout," as well as the menu, so he went looking for a new, meaningful name.

The quest led him to spend a day with Minnie Bolster, a 97-year-old Saratoga resident and local historian, who shared stories from the Worden Hotel’s heyday. She had two coasters in her possession; they were the first coasters she had ever seen, she told Welsh, so she and a girlfriend pocketed them. Now, one is permanently enshrined in Worden Hall’s bar top.

Even beyond the name, the newest location isn’t a cookie-cutter reproduction of Welsh's other restaurants. "I could have done another Five Horses, but I think they’re important to the neighborhoods they’re in and I didn’t want to take away from that. South Boston deserves its own neighborhood spot," he said.

Worden Hall’s most prominently different feature is its open kitchen. At both Five Horses locations, the kitchen is in the basement. Welsh had more freedom in design than ever with Worden Hall; the restaurant space is a new footprint, on the ground level of a brand-new building housing 31 residential units. The kitchen is in the rear of the space, and he chose to leave it open because "people are very interested in seeing how their food is prepared."

Executive chef Tim McQuinn is excited for the challenge. During his first foray into the Boston restaurant scene, he worked in an open kitchen on the line at Craigie on Main. "To actually see the end result of the guests getting a chance to taste the food and enjoy, it’s a great bonus," he said, adding, "You get to be a performer as well as a cook."

McQuinn joins Welsh’s Hawkeye Hospitality Group for Worden Hall; he most recently helped open up The Merchant as executive sous chef, after a stint as an executive chef in Vermont at the North Hero House.

"You’re not going to get a plate here and not see the value."

Like Five Horses, Worden Hall’s fare will be varied. Welsh said price points will range from about $8 for some small plates and desserts to $28 for the most expensive entree. McQuinn, executive sous chef Bill Nurse, and Welsh have just perfected a deep-dish pizza recipe that will "hit it out of the park," along with a double-stacked burger and ample vegetarian options. "You’re not going to get a plate here and not see the value," Welsh said. "You’ll see large portions; you’ll see very approachable food."

Worden Hall will open with one menu, but Welsh said to expect to see a bar menu, and potentially a separation of lunch and dinner options, in the coming weeks. Brunch is on the horizon, too.

As previously reported, Worden Hall will have an extensive bar program, including a whiskey focus similar to the original location of Five Horses in Davis Square — about 100 to start, he said. A hammered zinc tap tower will have 40 lines for rotating drafts, and there will be about 60 bottle options. 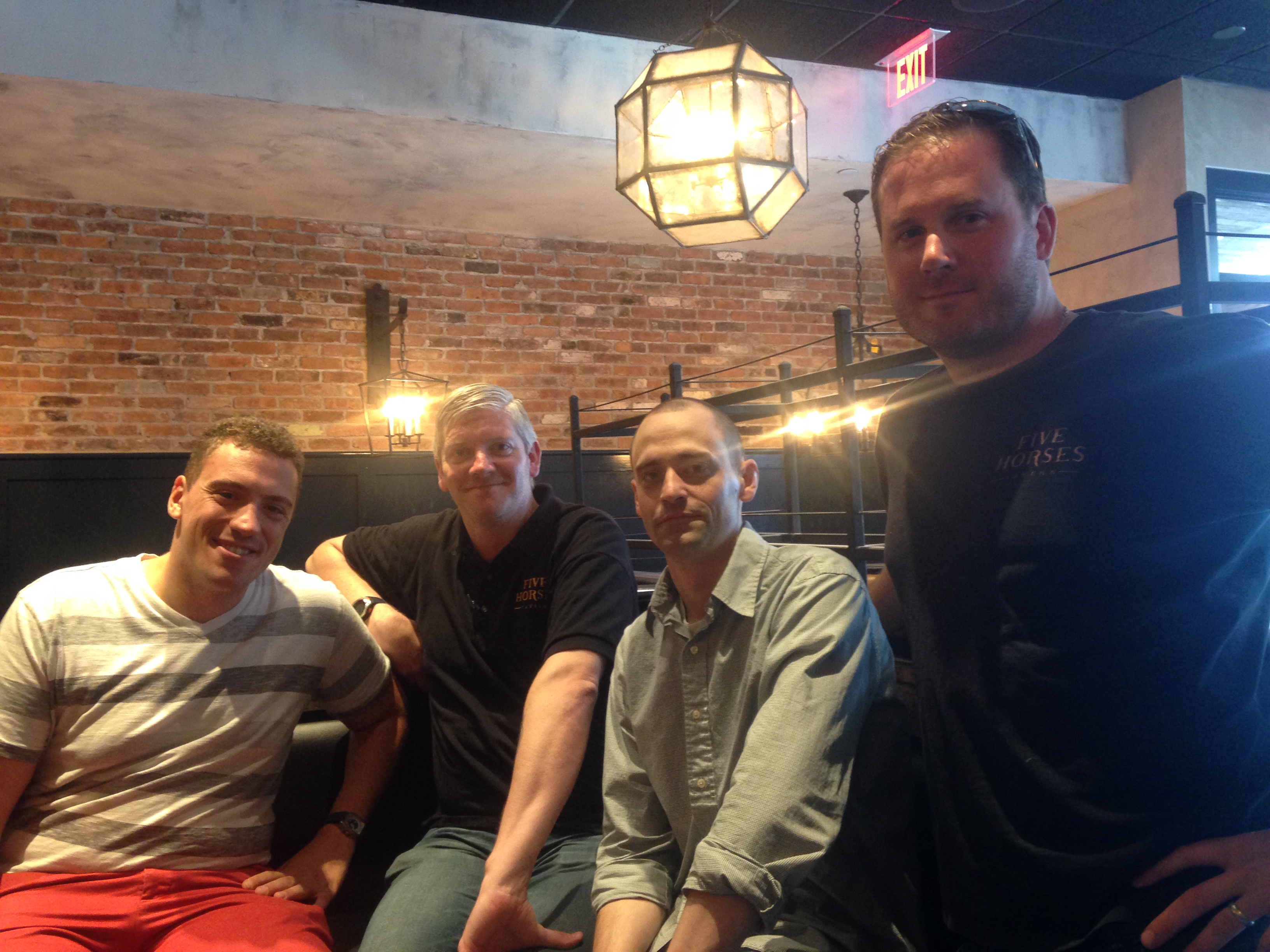 Atmospherically, Worden Hall won’t be a corner pub, a style of eatery Welsh says Southie already has and does well. With wide-open windows along Broadway, vintage glass panes above the bar, wrought-iron chandeliers, and a custom mural of the Saratoga race track by local artist Mark Grundig, "it’s nice enough that you can come here on a first date, but it’s not overly done that you’re going to feel bad walking in after a softball game."

There is a private dining room that can accommodate 26 guests at the back of the dining area. It has barn doors and windows that can either close it off entirely for a corporate presentation or a formal family get-together but will remain open on a busy Friday night and extend the public seating. That feature was always part of Welsh’s plan for his third venue, as his taverns do well with large groups and he isn’t able to accommodate them privately at the two Five Horses.

It’s just another way to meet the neighborhood’s needs.

"I like neighborhoods that are diverse and have all walks of life," Welsh said. "We cater to young professionals all the way up to my grandparents coming in at 5 o’clock."