Saugus officials should set up the orange dinosaur underneath the Hilltop Steak House cactus as a shrine for nostalgic pilgrims to visit.

by Jacqueline Cain Aug 20, 2015, 3:36pm EDT
Via Dairy Castle/Route 1 Miniature Golf in Saugus to Be Sold; Hotel/Apartment Complex to Move In [BRT], MT Realty to purchase Route 1 Mini Golf in Saugus [WL], and Is This Famous Dinosaur on the Verge of Extinction? [BDC]

Share All sharing options for: Ice Cream Stand & Mini Golf Complex in Saugus Will Be Gobbled Up by Development 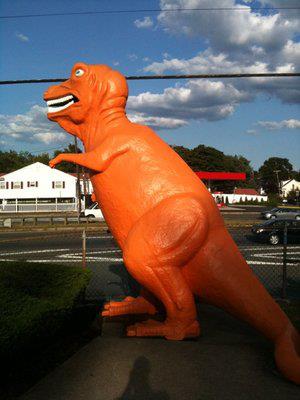 Get your mini golf swings in while you still can; the current season goes through October, and "It might be able to go one more season," real estate developer Michael Touchette told the Advertiser.

Touchette is building a hotel and apartments adjacent to the mini golf course, Collins Place at 1591 Broadway, and he recently entered an agreement to purchase the land at 1575 Broadway from longtime mini golf course owners Richard and Diana Fay. The Fays did not respond to a request for comment.

At 1591 Broadway, Touchette has two four- and six-story buildings planned, one a hotel and one a hotel/luxury apartment complex. The buildings will also have meeting spaces, a hair salon, a coffee shop, and a restaurant on the ground floors, according to plans.

The development that goes in at 1575 "will be 'in the same line as retail and apartments,'" the Advertiser reports.

As for the toothy, orange dinosaur that beckons from the golf course, Touchette told Boston.com his fate is undetermined. "He said that would be decided at a town meeting, where he will speak with town officials about the property and what they might do with the 12-foot-tall orange dinosaur."

There are plans to preserve another icon along Route 1 in Saugus, the Hilltop Steak House's towering cactus. Maybe the dinosaur can live forever under its shady arms.