A4 Pizza, Dosa N Curry Remain in the Dark More Than Two Weeks After Utility Issue

A solution is apparently underway, but a resolution will take more time.

Share All sharing options for: A4 Pizza, Dosa N Curry Remain in the Dark More Than Two Weeks After Utility Issue

Somerville restaurants A4 Pizza and Dosa N Curry are both entering the third week of a forced closure due to a utility issue at their building on Somerville Ave., and both restaurants are still in the dark — literally and figuratively.

"There was an electrical issue during service [on Saturday night, Aug. 1], and we are getting a frustratingly small amount of information from anyone involved," said Joe Barone, director of operations for Area Four, which also runs the Union Square pizza bar.

Barone and Jeff Pond, the restaurant group's pizza chef and a partner, declined to discuss what little they do know, citing ongoing investigations by the city.

Hi Friends just want to post a message to all of you to inform that Dosa n Curry is currently closed due to electric surge in the building. The restaurant is fine but the electric company, Eversource, has cut down all the power and gas and is being very slow to take any action to fix it. August first was when they told us, other 2 businesses and 6 Tennants to leave the building untill they can fix the problem ...

The post notes the Dosa team has been calling the utility company without answer for 16 days. "But please don't loose [sic] hope, as soon as we have some answer from them, we will inform you all and we will be back to providing you all delicious food and excellent service."

Rhiannon D'Angelo, a media spokesperson for Eversource, responded to Eater this afternoon. "Our equipment was damaged a few weeks back by some work done in the building. We weren’t involved in the work," she said, declining to describe the nature of the work, or to say by whom it was done, citing customer privacy issues.

The City of Somerville Inspectional Services Division is aware of the issue, commissioner Ellen Collins said. Senior building inspector Paul Nonni said,"The owner of the building is responsible for making sure everything falls in line. There are a series of steps here. This is not just changing a light bulb."

Nonni did not know the details of the issue, which caused some smoke and an acrid smell to infiltrate A4 Pizza during the middle of service on Aug. 1. There was no fire inside the restaurant, the A4 reps said. But the building inspector did say the issue will require new engineering and the digging up of parts of Somerville Ave. and its sidewalk.

"The owner [has] retained a licensed electrician, who ... is going to be providing Eversource with the design and calculations they need," Nonni said.

Eversource is waiting for the building owner to take the necessary steps, too. D'Angelo said. "We’re waiting on the approval from the wiring inspector of the repairs the customer is making. We're ready to upgrade our equipment as soon as we get that OK," D'Angelo said.

The building on the block also included a beauty salon, which appears gutted at 449 Somerville Ave. A sign on its door indicates the money transferring service that also took up shop in that storefront has moved to 396 Medford St. 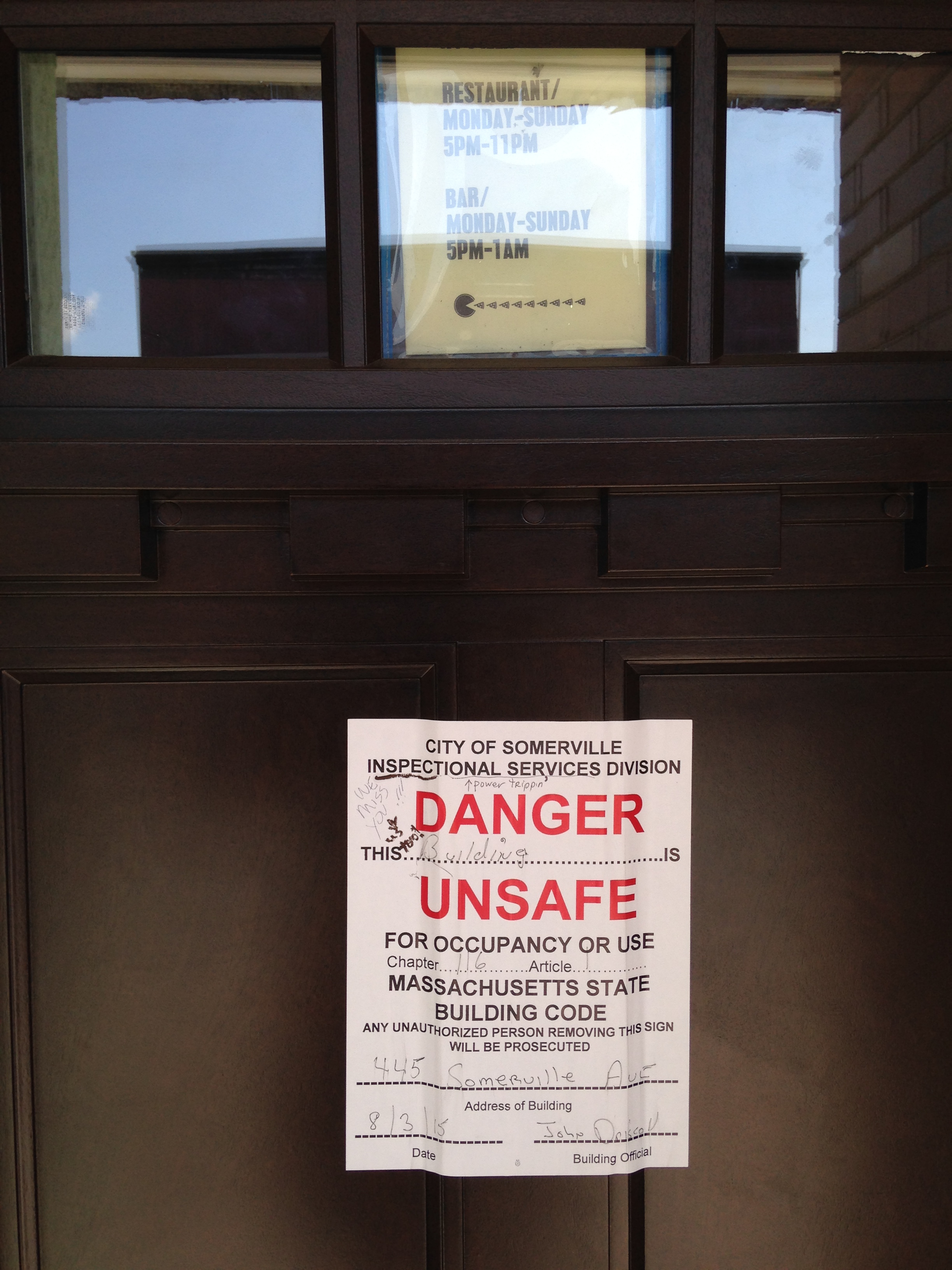 Signs on all of the entrances to stores and residences on that block indicate the building is unsafe. An A4 chef called 911 on August 1 and the entire building was evacuated. Fire department officials escorted residents in to gather some personal belongings after clearing the building that night, but since then, no one has been allowed to enter.

A 14-year tenant of one of the apartments was standing outside the building today. He confirmed he hasn't been allowed into his apartment in more than two weeks. While he appeared in fine spirits and was clutching a full Market Basket grocery bag, he said he does not currently have any place to stay "that is a home, [it's] one night here, one night there."

Like his neighbors the restaurants, the man doesn't know when he will return to his home.

"We intend on [keeping A4 Pizza] in Somerville, and hopefully it's in this space," Pond said.