Welcome back to The Pour, a regular feature where Eater Boston associate editor Jacqueline Cain explores beer-related topics, especially pairing. This week, gather your friends for a few pints and slices of pizza at Area Four in Cambridge and A4 Pizza in Somerville.

Wherever the Area Four team ends up building its next wood-fired pizzeria, know that it will fit in with the neighborhood.

"It is," agreed Jeff Pond, pizza chef and partner. "And if we do another one somewhere else, at some point you’re going to have to figure that neighborhood out. You can’t go in with a predisposed view of how you’re going to do things without any change. Those days are over."

Now, a third location isn't on the immediate horizon, but it's always on the minds of the Area Four team. "We’re working on it," Pond said. "Year two, we came out pretty hot with a food truck, a second location, a hot dog cart! There’s a lot that goes into that ... We said, 'Let’s step back and create a stronger foundation of staff, environment, culture, and then we’ll move forward.' I think we’ve put ourselves in a good position now to take that step whenever."

You heard it here first, so look forward to more perfectly-caramelized crust in your future.

But for now, the restaurant group is focused on their two locations in Technology Square, Cambridge and Union Square, Somerville, and frankly, they couldn’t really be much different.

The former neighborhood, a subsection of Kendall Square, hosts a business crowd. It's full of offices, labs, and Massachusetts Institute of Technology affiliates. To meet these people's needs, Area Four begins its day at 7 a.m., with an in-house coffeeshop. The restaurant has regulars who come in daily for breakfast, lunch, and dinner.

In Union Square, A4 doesn’t even open til 5 p.m., and the narrow restaurant really feels like a neighborhood bar. At 11 p.m., its slings pizzas — from a wood-fired oven basically located behind the bar — for half price, earning itself a place on Eater Boston's list of Most Reliable Cheap Pizza Slices. In this case, a "slice" is half a pie.

The neighborhood is home to "down-to-earth, good people, and lots of artists," said Erin Cronin, general manager at the Somerville branch. "Plus, there’s a really huge beer culture in Boston. I basically just try to listen to what people want."

In that regard, Area Four and A4 are completely on the same page. "You get more the science type here, especially during the day, and we listen to that. That’s just keeping your ear open and seeing what people want and responding to it," Barone said, in Cambridge. "The vibe here is very different from the vibe there. That’s very much by design."

In both places, what guests want is pretty simple: Delicious pizza, a beer to go along with it, and an atmosphere to enjoy it among friends.

(Both restaurants offer wine and cocktails, too; those beverages are popular, and also kept on the simple end of things. For this column, though, the conversation centered on beer.)

"When you talk about pairings and bringing the two together, we’re fortunate because of what pizza is,"  Pond said.

Barone continued the thought. Pizza and beer are both "just accessible products that seem to have been around forever. It’s a good time, it’s a relaxed vibe, it’s a neighborhood vibe," he said. Their restaurants are "the perfect marriage of that neighborhood pizzeria and the really cool bar atmosphere."

Beyond the relaxed, go-to nature of the pairing, Pond sees a perfect match in that a fermentation process grounds both. "When you’re fermenting something, there’s something very real that happens in the whole process. Even with wine. You’re adding sugar to achieve a certain fermentation: to speed it up, to slow it down. It’s all based on time and temperature," explained the pizza chef, a breadmaker by trade. (Pond has talked about this more in detail during a past Eater Pizza Week). "Thirty-six hours is a prime point for us. Certain beers, the [Dogfish Head] 60 minute, 90 minute [IPAs], they’re talking about the same process."

While wine is created by a similar process, "There’s more fun around beer," he said.

All three employees said they don’t typically think about how certain beers they carry will pair with particular pizzas. "A lot of times, people know what they like and they know what they want," Cronin said. 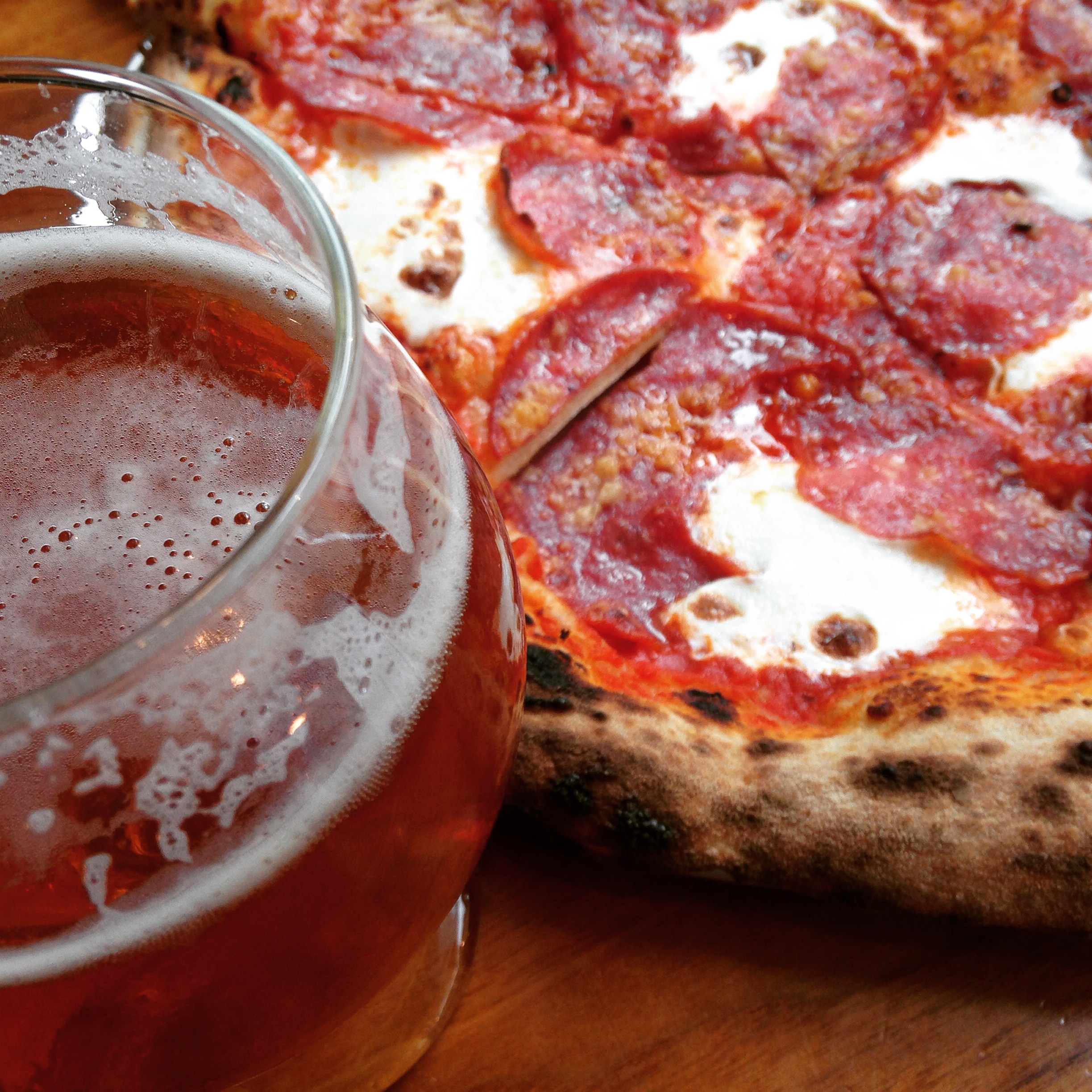 The GM brings experience of being on the opening team at Lord Hobo to her beer buying duties at A4. "I thought I knew about beer before we started, but … I couldn’t even say Weihenstephaner," she said. "[Lord Hobo owner Daniel Lanigan] gave me such a good base: I knew the good breweries, the old-school, world class stuff. If you have a good core, the stuff to base your judgement around, then everything else is personal opinion."

Speaking generally, she advises reaching for a hoppy beer if you are having a pizza with a little kick to it, like either restaurant’s sausage and pickled banana peppers.

Pond had a recommendation of what to avoid if you’re pairing-minded: "Sour beers don’t do well with our sourdough, because they kind of offset each other," he said. "With the pizza, there’s meat, there’s fat, there’s umami, there’s more around that mouthfeel. But with the beer, it’s easier to throw that off."

One brew that is pretty much everywhere this summer is flowing at Area Four: Ballast Point’s Grapefruit Sculpin, an American IPA with added grapefruit flavor. "There’s a citrus element, so the natural pairing would be to try and enhance that a little. I like the mushroom [and Fontina] here, because we finish it with with gremolata. There’s lemon, garlic, and parsley that finishes the pizza. The mushroom flavor is pretty strong, so it’s pretty big. But I don’t think it takes away from that particular IPA."

He continued, "The Grapefruit also goes with the Soppressata ["Not Pepperoni," on Area Four’s menu. It goes by its given name at A4], because it’s bright and goes well with the kind of porky fat. I use the soppressata because I like that it leeches the fat, so it gives the pizza a totally different feel from pepperoni."

The original Sculpin, a best-seller at Area Four that will very likely come back after the summer, is a sharper, piney beer. Its grapefruit counterpart is bright and smooth. It has an IPA backbone, but it’s not an example of West Coast hops like its big sibling. The citrusy flavor isn’t sweet, and it plays well with the tangy sauce, and the salty, almost fleshy porkiness of the straightforward salami.

But really, just grab your friends, order a pie, and get a few pints. "Pizza and beer naturally go well together," Pond said. "We don’t have to tie ourselves to a particular pairing with a particular pizza. While you can do that, you can’t really go wrong with whatever you choose."

The Pour: A Series on Beer Around Boston