Even in the hazy, lazy summer months, life in Boston is busy — and expensive.

But everyone has to eat, and with the dining scene here growing more exciting every month, sharing a tableful of small plates with a friend or partner is time well spent. And at Night Market in Harvard Square, that experience doesn’t have to break your monthly restaurant budget.

Nothing on Night Market’s menu costs more than $14.50 (Shaky Shaky Beef). The satisfying bar snack Numb Nuts, a large handful of sweet, spicy peanuts, will only set you back $1. Sake-based cocktails and slushies top out at $8; beers (none on draft) range from $4 - $12 (the latter for an imported Japanese craft); and any bottle of wine is $28 (or maybe $30, for a special-occasion sparkling). 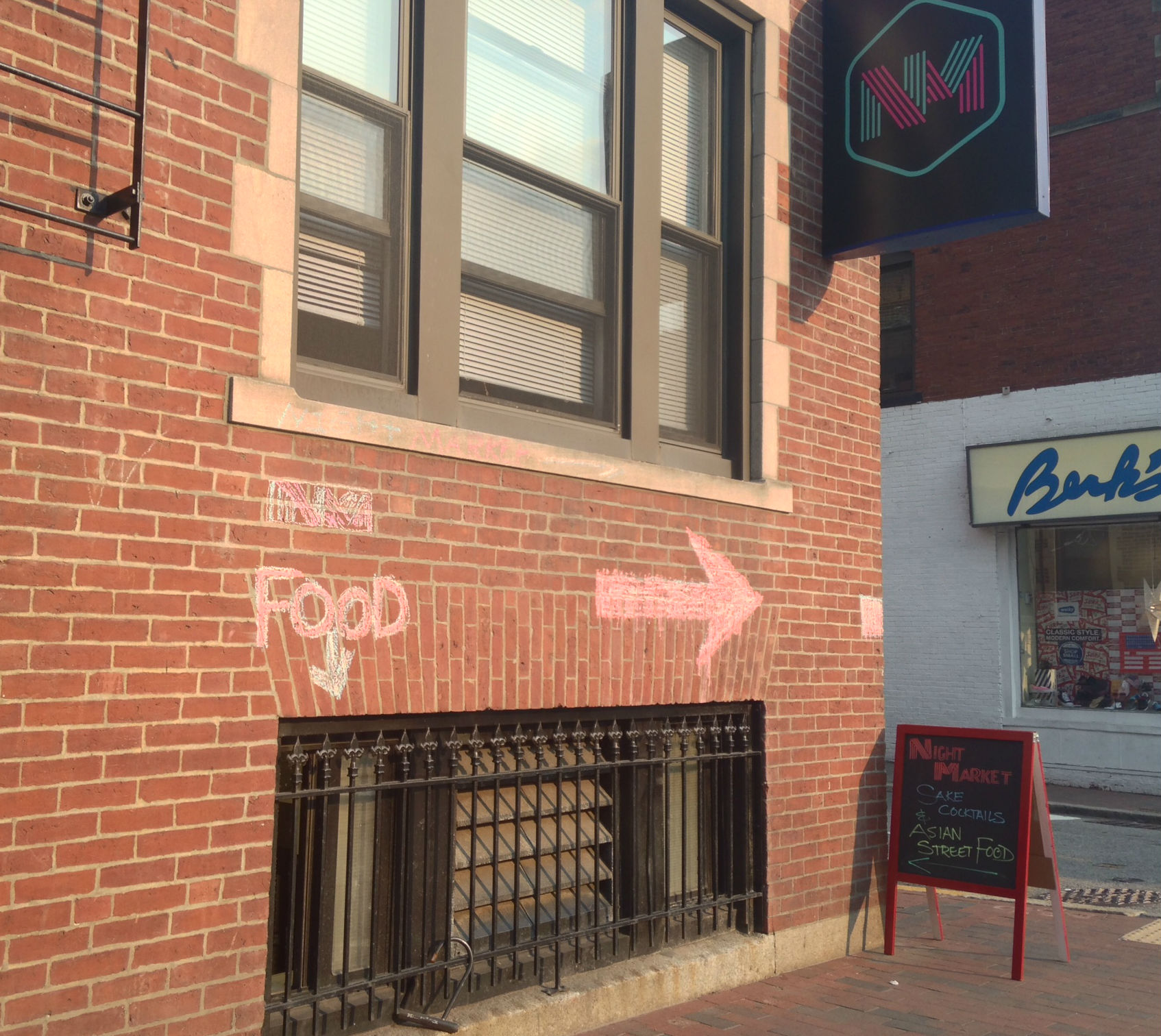 The 48-seat room, almost hidden with a JFK Street address and an entrance on Winthrop Street, typically has seats available during dinner hours on a given night — especially these months when Harvard Square takes a break from its resident students. "No one thinks about going into a basement in summertime," chef Jason Tom reflected recently. "But there are slushies!"

When diners enter the subterranean space, they invariably notice the colorful, repurposed images of Chinese propaganda that make up an eye-catching mural by graffiti artist Rene Gagnon. Music will be bumping, whether it’s a playlist based on Del the Funky Homosapien; the Clash; or Asian hip hop and rap. "Sometimes, it’s 90s music, because 90s music is fun, too," the chef said.

The funky atmosphere and some sticker-shockingly low prices combine for a satiating and fun date night and a different experience than you may find at some of Boston’s hottest spots. 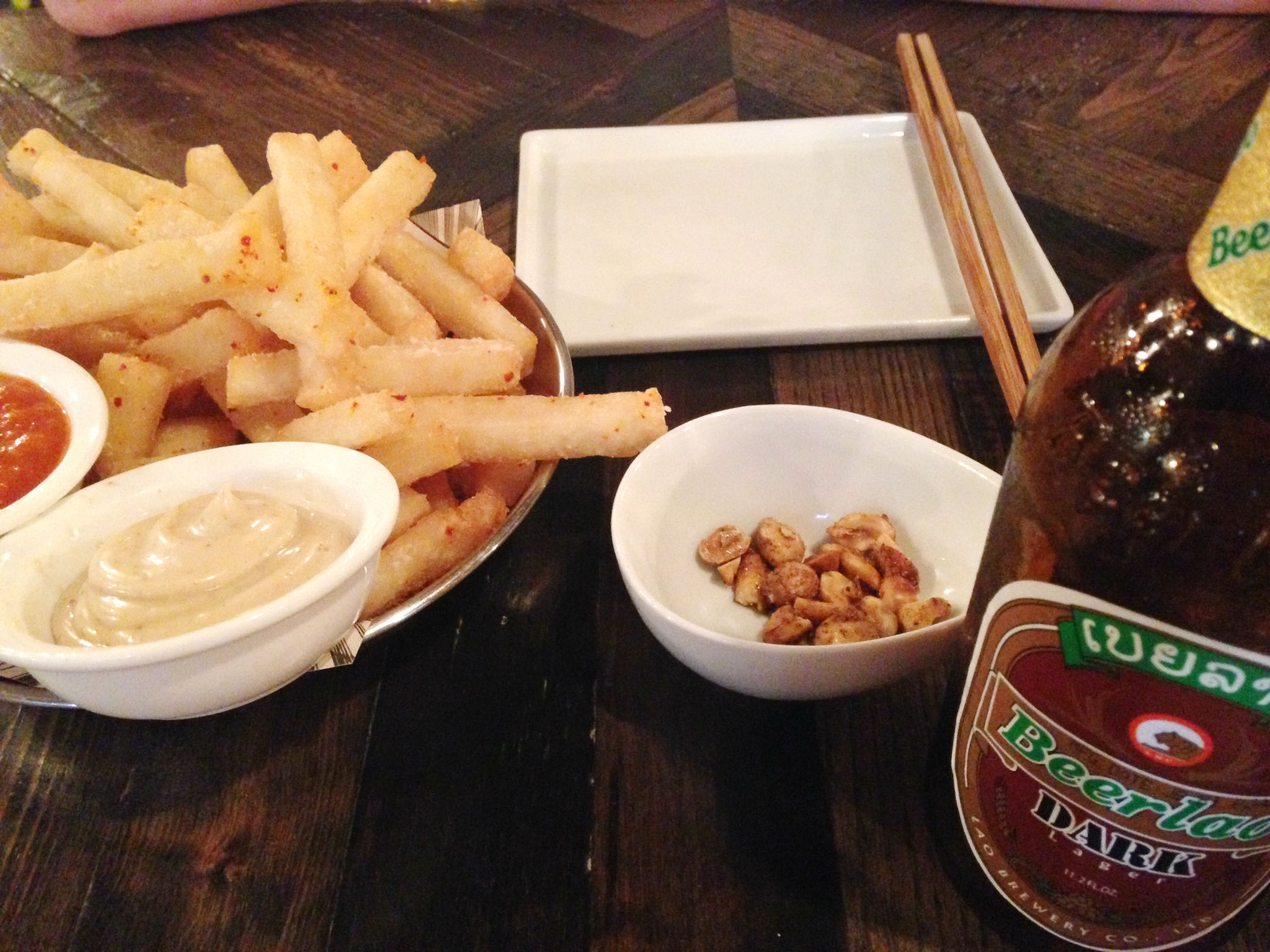 A recent $43 evening (including a 20-percent tip) brought eight plates to the table — a bar snack, six skewers, and a heaping plate of crispy daikon fries — plus two beers. While comparisons are imperfect, a similar amount of food and drinks ordered at three different restaurants in Somerville and Fort Point have recently rung up to about $50, $60, and upwards of $80.

Chef Jason Tom says the value is part of the experience the Night Market team is going for.

"We want to make this place as accessible as possible," he said. "We want people to think, ‘I want a bite to eat after work, I’ll go into Night Market.’ Or, ‘Hey, it’s a random Wednesday night. I haven’t seen my friend in a while. Let’s meet up at Night Market.’"

Owner Ash Chan hired Tom to enact the vision he had for Night Market as an edgy, Asian street food-inspired, college town spot. The chef’s resume includes Hutong Provisions, a modern Asian cuisine pop-up he held at Abigail’s in spring 2014; Stir, while Kristen Kish was busy filming season 10 of Top Chef (which she went on to win); the opening back-of-house teams at Moksa and East by Northeast; and other area kitchens.

Before donning a chef’s coat, though, Tom was an accountant. "I tend to have my eye pretty well-focused on numbers, and I keep everything very, very tight," he said.

In addition to learning from chefs like Philip Tang (ExNE) and Patricia Yeo (Moksa), Tom also draws inspiration from his travels in China and Southeast Asia, and it comes through in Night Market's bar snacks, skewers, and larger plates. The som tam salad ($9.50) is "near and dear to my heart from traveling around Thailand and having this fresh, spicy salad with lots of herbs and a little bit of funk from fish sauce," he said.

Tom suggests a couple visiting Night Market might order two or three veggie dishes, such as a skewer of three plump rounds of zucchini drizzled in a spicy sesame chili sauce ($2); five thin, springy mushrooms marinated in red wine vinegar, chili, and garlic ($1.50); or a tin of crunchy snap peas coated in garlic, chili flakes, and lemon zest ($5). Next, try a couple meat skewers, like the tender, rare skirt steak and thick, sweet soubaise that comprises the Sukiyaki Western ($2.50); or Tom’s favorite, the Xinjiang meatballs ($4), which can be made gluten-free. Round out the meal with a rice or noodle dish, like the house rice served with marinated bean sprouts, kimchi, gochujang, and a fried egg ($10).

"We don’t want people to feel like they’re locked into their appetizer, their entree," Tom said. "We want people to have that fun experience of variety."

By making it possible to have an intimate, exciting meal for two while spending less than $45, Night Market adds a little variety to the roster of go-to date night spots, too.