The restaurant is open daily, but it will celebrate its grand opening next month. 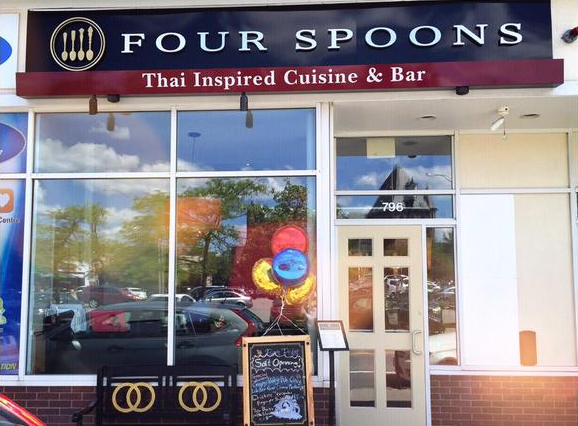 Newton Centre has another new Thai bistro: Four Spoons has softly opened, and its menu of classic dishes and specialties is available daily. The restaurant plans to celebrate with a grand opening sometime in mid-July, the general manager confirmed today.

Four Spoons joins another newly-opened Thai eatery, Manow, on Beacon Street. Manow opened earlier this month at 1130 Beacon St., and Four Spoons is just less than a mile away at number 796. The space formerly house B Street Restaurant & Bar.

Last Tuesday was opening day at Four Spoons, an employee said. So far, a few appetizers have been popular orders, including the restaurant's crispy baby bok choy, tuna tataki, and beef tataki. In addition to classic Thai dishes like drunken noodles, pad Thai, and red and green curries, the restaurant has "Spoon signature" items, which include Chilean sea bass with black truffle, and a dish with scallops and caviar.

The 48-seat restaurant is open daily from 11 a.m. - 10 p.m., and after its grand opening, it may extend its hours later on Friday and Saturday nights, the employee said. The eatery was approved to open until 1 a.m. Keep an eye on Four Spoons' Twitter profile and Facebook page for more information on its grand opening.