This Week Is the Last Hurrah for the Brighton Applebee's

Do you want to buy some tchotchkes?

Share All sharing options for: This Week Is the Last Hurrah for the Brighton Applebee's 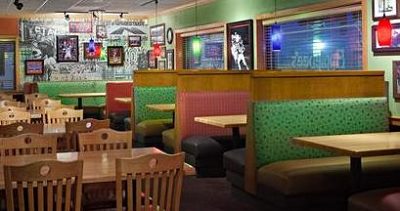 The Cleveland Circle branch of Applebee's plans to shutter June 30. In the meantime, it's selling burgers for $5.99, and — for serious Applebee's fans and/or avid tchotchke collectors — all the random stuff decorating the restaurant.

The franchise announced its final week in a Facebook event, Universal Hub reported. Boston Restaurant Talk noted that the Applebee's, a style of restaurant more commonly associated with suburbia and satirical movies about work than a hotspot for young people, was a popular college hang in Brighton.

According to the comments on the event, it will be missed. "Over my three years so far at BC, going to this Applebee's has been my single favorite activity," wrote one visitor. "I'm sad to see you go."

Another person recalled "the cash only Jello shots during football weekends [which] will be sorely missed."

The restaurant is closing to make way for senior housing and a hotel, which UHub previously covered.

Applebee's is the largest casual-dining chain in the world, according to its website. There are more than 1,900 locations across 15 countries, and 27 others in Massachusetts.