The L'Espalier chef will open Tides in Essex this fall.

by Jacqueline Cain Jun 16, 2015, 9:00am EDT
Via L’Espalier Chef to Open North Shore Restaurant [BG] and All Coverage of Frank McClelland on Eater [EBOS]

Share All sharing options for: Frank McClelland to Bring 'Seaside Food' & Back Bay Cred to the North Shore 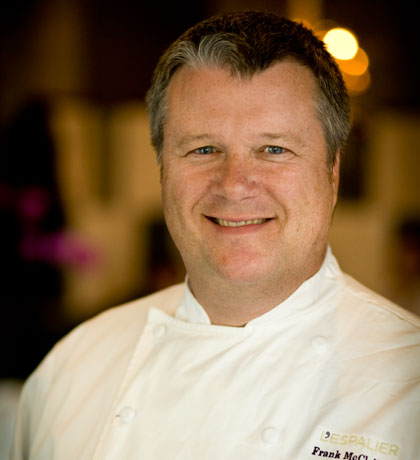 Frank McClelland, the chef and owner of L'Espalier, will open a new restaurant, Tides, in the town of Essex on the North Shore.

The Boston Globe reports that Tides, situated at 35 Dodge St., will overlook the Essex River and serve "seaside food that represents [McClelland's] heritage." The chef is an Essex resident, and he also owns a farm there, from which he sources ingredients for L'Espalier's menus. The Globe notes that McClelland's wife, Heather, and their children will assist with the new restaurant. Tides will have seating for 100 and is aiming for a fall debut.

Tides will have a fire pit with a rotisserie, as well as a wood-burning oven. In addition to seafood, there will be pizzas, charcuterie, pesto, and pickles. There will be a garden on-site, and, like he does at L'Espalier, McClelland will source local ingredients, he told the Globe.

The restaurateur purchased the elegant Back Bay L'Espalier in 1988 and followed it up with three area locations of Sel de la Terre, which have all since shuttered. Last year, along with SDLT chef Daniel Bojorquez, McClelland opened La Brasa in East Somerville. In 2007, McClelland won the James Beard award for Best Northeast Chef.