The Downtown Crossing cafe will be an "urban sanctuary."

by Jacqueline Cain May 22, 2015, 9:00am EDT
Via Ogawa Coffee USA [FB], Ogawa Coffee Set to Open in Downtown Boston [BG], and Coverage of Ogawa Coffee on Eater [EBOS] 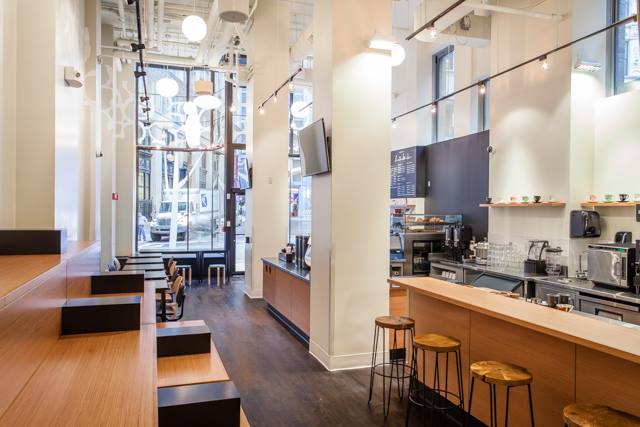 At its 36 shops around Kyoto, Ogawa Coffee has developed a precise approach to making coffee drinks, and the company brings that "pursuit of coffee perfection" to Boston this weekend. The first shop outside Japan will open at 10 a.m. today in Downtown Crossing.

"We humbly regard the opening of our Boston shop as an opportunity to learn from the world’s largest coffee-consuming market, and incorporate this learning into building a future of exceptional coffee," the company's U.S. CEO, Yoshinori Uda, said in a press release.

The 42-seat cafe was designed as an "urban sanctuary." The staff, hired locally, underwent training with 2010 World Latte Art Champion barista Haruna Murayama, who relocated to Boston to oversee the new cafe's menu development, as previously reported. The coffeeshop chain is particularly known for its intricate latte art, and the Boston Globe reports that the local cafe will have stadium seating so that customers can watch the baristas in action. (It can be retracted during busy times, the article notes.)

Cafe fare like croissants, salads, sandwiches, and smoothies join a full menu of single-origin drip coffees, espresso drinks, teas, and Ogawa's Signature Drink, a seasonally-changing creation from the baristas. After today, the cafe is open weekdays from 7 a.m. - 7 p.m. and from 10 a.m. - 7 p.m. Saturdays and Sundays. Throughout the weekend, the first 100 guests through the door will received a complimentary 4-oz. package of Ogawa coffee beans.