Crudo Will Open Soon, Bringing Two Floors of Sushi to the North End

The restaurant is now hiring for a variety of positions.

Share All sharing options for: Crudo Will Open Soon, Bringing Two Floors of Sushi to the North End 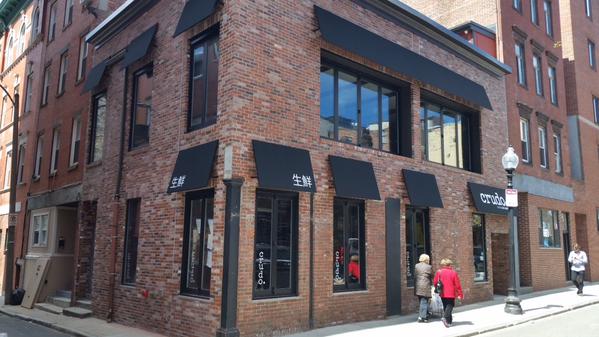 Crudo — or Crudo., with a period after the name, as it's written on the upcoming restaurant's social media channels — should open fairly soon at 78 Salem St. in the North End. Awnings and signage are up, and the restaurant is currently hiring for a variety of positions. The job posting describes Crudo as "a modern Japanese restaurant" that "blend[s] the art of ancient sushi-making with modern local ingredients." The menu is "based on traditional Japanese technique and inspired by Pan-Asian flavors."

At one point Crudo was going to be called Sushi Rock. The two-story restaurant, which will have a bar on each floor (as well as a sushi bar on the ground floor), has been in the works for almost a year, replacing Pulcinella Mozzarella Bar e Ristorante. While almost all North End restaurants fall somewhere in the Italian cuisine spectrum, Crudo actually won't be the first purveyor of sushi in the neighborhood: There's also North End Fish (Mercato del Mare).