Charred carrot micheladas all around!

Share All sharing options for: Opening Alert: Today Is a Great Day for Tacos — Naco Opens in Central Square 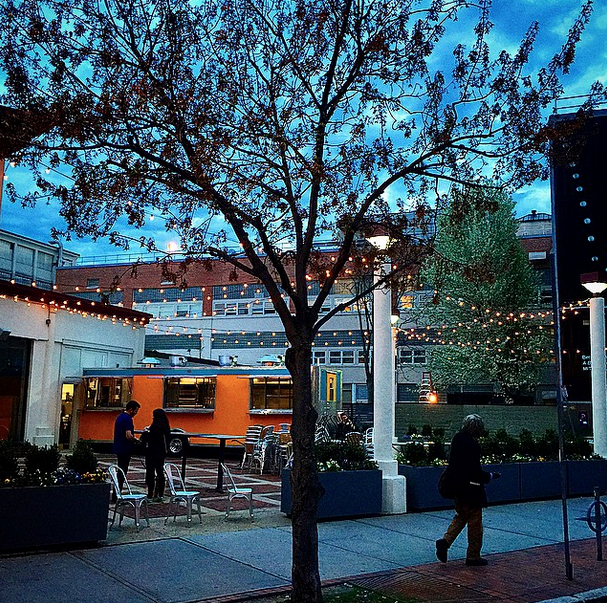 Naco Taco opens to the public today at 11 a.m., and that means more pork, beef, fish, lamb, and torched avocado tacos for everyone.

Over the weekend, the Naco geotag on Instagram and hashtag #nacotalko were populated with food photos by friends and family of the taqueria. A Chowhound poster said today is opening day, and an employee confirmed the rumor on the phone this morning.

Michael Scelfo's latest project brings a huge, hip outdoor patio to Central Square, which the chef/owner previously said could accommodate about 100 people. If this weekend's mini-heat wave breaks with threatening rain this afternoon, the patio may be less crowded, but the employee said it would be open for anyone who wants to dine al fresco.

Tacos, served with cotija, cilantro, onions, and lime on house-made, lard tortillas, are the main attraction. The spit-roasted al pastor version comes with burnt pineapple salsa; there is also an offal variety, with a guajillo crema on a pig's head and blood tortilla. Cured lamb belly comes with a traditional, Mayan pumpkin seed spread called sikil pak. While the tortillas themselves aren't vegetarian, there are options for herbivores who ask. The veggie taco has torched avocado and a smoked almond salsa.

Tortas are prominent on the menu, too; the sandwiches feature similar fillings as some of the tacos, including a fried smelt version, lamb belly, and one with shaved tri-tip. There's also a pig's head torta, and a shishito and huevo torta. Other menu items include bean nachos and crispy pigs' ear chiliquiles.

That glorious patio was made for day drinking, and the options are festive. There are eight beers on draft available in pitchers also, and several bright, light wines are also priced for sharing. The bottle list includes Mexican cervezas and American favorites. There is a trio of house-made sangrias, and micheladas come in smoked agave, charred carrot, and mole varieties, among others.

Naco will be open daily from 11 a.m. - midnight, with hours extending until 1 a.m. on Thursday - Saturday nights.