Share All sharing options for: The Pour: Lone Star Taco Bar Eyes May for Cambridge Debut

When news broke last fall that the Lone Star Taco Bar outpost heading to East Cambridge would merge the best parts of its older Allston siblings — tacos and booze — mouths started watering like the margarita glasses needed a refill. It’s been a long, cold six months since then, but the wait may soon be over.

"We want to open in May, but we’ll see," said Max Toste, co-owner and beverage director at the restaurants, which also include Deep Ellum. "We thought we’d open by the end of last year."

The Lone Star team, which includes Toste’s partner, Aaron Sanders, has been in the former Lizzy’s space for more than a year. To execute Lone Star Cambridge, it needed an entire gut renovation. The first design, laid out late last summer, wasn’t right. "It felt cramped and weird. We had to go literally back to the drawing board," Toste said. "Then there were the holidays, then the blizzards. It was a lot." 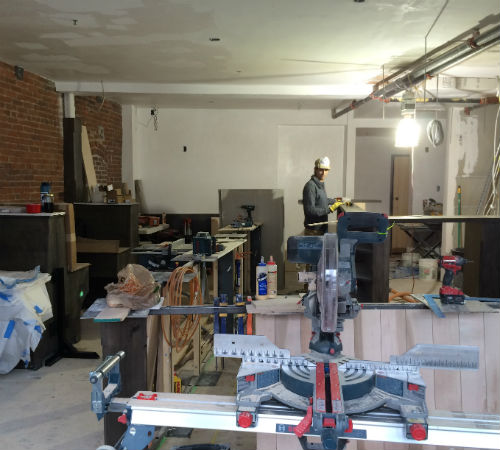 Construction continues, but Toste said it now has the feeling they want. The space at 635 Cambridge St. has a large, exposed brick wall, which adds functionality and an aesthetic like the exposed brick at Deep Ellum. The new Lone Star will owe its riveted, zinc bar top to its namesake predecessor’s tables. "It’s going to remind a little of this place, and a little of that place, but the layout is completely different."

For example, the new Lone Star will have bar-height booths, a furnishing neither Allston location has. Toste expects some tweaking will happen once the dust settles, but he anticipates the new restaurant will have between 65 and 74 seats, compared to the original Lone Star’s 48. There is also sidewalk seating in Lone Star Cambridge’s future.

In fare, it will be different compared to other East Cambridge establishments. "When you walk around and get a feel for the neighborhood, there’s a lot of craft beer, burgers, comfort food: Atwood’s, Puritan & Co., Bukowski’s, State Park in the Kendall Square area, Abigail’s," Toste said. With a different kind of food, Toste is hoping the new Lone Star will appeal to the neighborhood, including its restaurant workers, who want late-night food options that are different from the types of food they’ve been around all day.

Chris Robichaud, who joined Deep Ellum a year after it opened, will be at the helm of the new, semi-open kitchen. The menu will be the same from 11 a.m. - 12:30 a.m. daily, and it will largely resemble the Allston branch’s. Along with the restaurant group's executive chef Rian Wyllie, the team spent about a year perfecting the current menu. "I felt like it was something we already did well, so why screw it up?" Toste said.

There will be some notable additions: Lone Star specials, including a torta and a deep-fried hot dog, will be permanent at the Cambridge outpost. Wrapped in bacon, the Sonoran-style hot dog is a traditional food truck offering in Arizona and northern Mexico.

At its heart, Lone Star is a bar, inspired by fun, traditional Mexican cantinas. While the original taco bar didn’t need to step on the toes of its neighbor with extensive wine and beer offerings, the new restaurant is a standalone place. As such, the booze will flow generously.

Toste wants everyone to get into rose. He serves the pink wine on draft at the Allston Lone Star, and on opening day, among Lone Star Cambridge’s 16 drafts, there will be rose, likely a classic Provencal variety. Toste also plans to open with a sherry on draft. "If I’m eating anything spicy, if I’m not in the mood for a margarita or a beer, rose and sherry is my favorite. Bright, earthy," Toste said. The new Lone Star will have a larger wine list in general than its predecessor, but don’t expect to see many reds. "I’ll have some funky white wines, funky rose, some sparkly, fizzy stuff that makes more sense and appeals to the neighborhood."

Don’t be scared: Toste isn’t talking about a syrupy-sweet wines. "Nothing sweet goes with food. You want to pair minerality and acidity with food. That runs the gamut on all our drinks: There’s a balance of acidity. The worst thing you can do to a margarita is make it too sweet."

Bright, acidic flavors will abound, prominently displayed on a list of about 60 agave spirits. "Tequila will make your mouth water because of the acidity. It’s a natural pairing with food, especially salty foods, grilled meats, and charred things ... And the smoky tones of mezcal is a natural pairing with the flavors of the food we sell."

For beers, the focus will also be on dry, mineral flavors, like German lagers, helles, pilsners, maybe a dry Hefeweizen, and hoppy IPA. "The beers I’m going to have in Cambridge will be as large of a spread [as Deep Ellum has], but I really don’t think a Belgian quadruple makes any sense with the food we’re serving."

But sometimes, you may just want to relax out at a fun, neighborhood bar. Toste wants the new Lone Star to be that for East Cambridge.

"If you drink a bottle of rose and share guacamole, that’s a pretty good hang. You don’t have to go margaritas and tacos every time."