Michael Serpa opens his restaurant — his first solo venture — this Friday, April 3. Here's everything you need to know, plus a look inside and a peek at the menu. 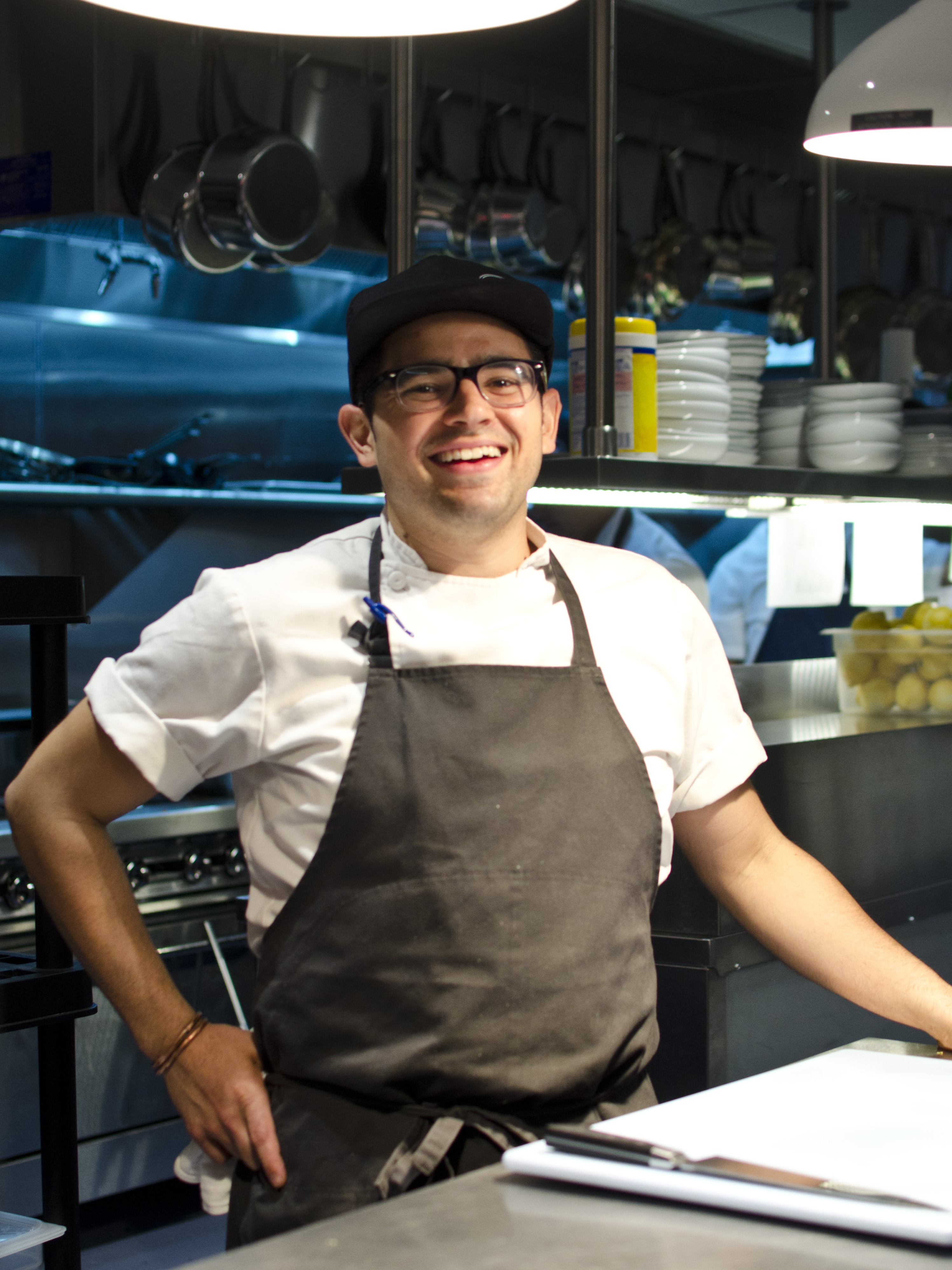 On Monday, Michael Serpa moves around SELECT Oyster Bar rapidly, making the final adjustments before a few evenings of friends & family service, followed by the grand opening on Friday, April 3. He's animated, jumping seamlessly into different voices to quote different people as he tells the story of opening his first solo venture. In a different life, he could be a voice-over artist — or at least an expert at reading bedtime stories to children. But four days away from opening his restaurant, he's chef, owner, general manager, art buyer, and so much more, all wrapped into one.

"The cooking is actually the easiest part of the whole opening-the-restaurant process," he says. "I'm like, let me go back in the kitchen. I don't really want to pick a payroll company; that's not fun at all. They hound you. And linen companies — every guy comes in saying, Oh, we'll give you ten cents a napkin...nine cents a napkin...eight cents a napkin. Sold!" Serpa hasn't hired a general manager, so everything falls to him. "It's kind of a small space; if we get really good staff, they can manage themselves," he had reasoned, and it sounds like he's on the right track as the opening staff includes former general managers, owners, and the like.

"I don't want to make any more clam chowder ever."

Serpa spent more than half of the last decade at Neptune Oyster in the North End, and while his new venture is still in the seafood realm, it's in a much different vein. "I obviously cook seafood — that's what I like to do — so I wanted to do a seafood concept," Serpa says, "but I wanted to stay away from the clam shack stuff. I don't want to make any more clam chowder ever. Not that there's anything wrong with clam chowder, but after you make, like, a million clam chowders, you never want to fucking see clam chowder again in your life." There's no space for a fryer anyway — or a bucket to dump the fryer oil, or a place to store the fryer oil, or space for French fries in general — so there are no fries, fried clams, or anything like that. (Sorry, Neptune lobster roll lovers — he won't be doing a lobster roll here.)

"I obviously didn't want to make a Neptune knock-off; that'd be boring for me because I don't want to be doing what I've already been doing," he says. In fact, his restaurant was almost a sibling to Neptune. He and and Neptune owner Jeff Nace initially thought of doing "a side thing off of Neptune, kind of like Toro and Coppa." Neptune would have been like Toro, he explains, and the new place would be like Coppa, and he'd bounce back and forth. "We looked at a bunch of spaces, and a lot of stuff started up a little bit and didn't really happen, and then it just worked out like this, with me by myself. Honestly it's much better like this for both parties — there's no possible way I could be be running another restaurant right now while trying to open a restaurant in the way I'd want to be opening a restaurant. I would be doing them a disservice if I were to stay there. It's kind of the natural progression in the restaurant industry."

In typical Back Bay fashion, the space is on the smaller side, but Serpa and his team have designed it efficiently, maximizing space with a long bar as the focal point, a large high-top right by the coveted front windows, and a few two-tops snuggled up against the side wall, running parallel to the bar. And out the back door, there's an intimate patio that he hopes to open on April 13, provided the awning and permitting happen in time. The patio floor will be heated, so it should be comfortable even in these early spring days that still feel like winter.

Appropriate for a seafood concept, pale blue is the prevailing color in the restaurant, along with light wood and bricks. There's a smattering of nautical details, but not in an overly kitschy way — some pleasant whale artwork, a small anchor behind the bar, weathered oars on the wall in the stairwell down to the restrooms, a colorful Jacques Cousteau print.

Initially, Serpa wasn't even thinking of Back Bay as a potential location for his restaurant. "There's a reason why there are not a lot of independent, small restaurants in Back Bay," he says. "It's very, very expensive, and the rent is high. I was looking more at the North End if we were going to do a side thing off Neptune. I kind of like Harvard Square. Actually, I'd love to do a restaurant in Eastie, maybe some day." (Serpa is an East Boston resident.) "I think a good restaurant in Eastie would be super, super neighborhood, affordable, a good place for roast chicken, steak, and burgers. That would kill it over there, right in Jeffries Point."

"Sarma's awesome," Serpa says. "That's, like, my favorite fucking restaurant. The whole place is perfect. Cassie [Piuma] is the best. She's the most humble, modest, badass chef. She's like, Oh yeah, it's just labne and za'atar, and I'm like, I don't even know what this is. I don't even know how to make this. And Vik [Hegde] on the bar is super talented, no pretension. Awesome bar crew. The whole vibe is warm and glowing and friendly."

"So Back Bay was not even a thing," he continues. "I was not even thinking of it." He also wasn't considering "eclectic" neighborhoods, like where Sarma is in Somerville, perched just above Union Square on the edge of Winter Hill, because the concept he had in mind wouldn't be a fit. "This is set up to be what I like — my style of food, wine, etc. — but also being aware of where you're at. Back Bay is going to be a good fit, hopefully. Or we're going to be a good fit for Back Bay, hopefully."

When he was presented with the Back Bay space, Serpa thought about how when he's in the neighborhood, he's "walking around shopping or whatever" and just wants to "grab a good glass of wine and a bite somewhere good."

"Not that there aren't good restaurants here," he says, "but they're a different atmosphere than what we're looking to do, which is very casual. I like Grill 23, but I'm not going to pop in there and have a steak every now and then just 'cause I'm walking around shopping (although I would love to if I had the money!) The whole concept of SELECT came from my wanting to have this neighborhood spot, because I thought that was a gap in the market in Back Bay. Just a place you can go grab of glass of wine."

"I think an area where we can excel and set ourselves apart is our cooked fish dishes," says Serpa. "A lot of places don't feature enough of them, and at restaurants in general, not just in Boston, you get cooked fish and it's overdone. You're wasting this great product, this beautiful fish. But cook it just perfectly, and you're like, Wow, that's so fucking good. So we're doing a lot of good cooked fish dishes, crudo, stuff that I love."

"I love when restaurants have a concept," he says. "Toro is a tapas bar, but they can use other ingredients — but it's all made in that style of a tapas bar. So they can use a Japanese ingredient, but it still tastes like Spanish tapas. That's what they really excel at doing. Same thing for Uni. And Sportello. They can use non-Italian ingredients and kind of a French technique, but it comes across like an Italian-ish dish."

Serpa's base is "Mediterranean-ish countries," touching on Spanish, Basque, French, Greek, and North African cuisines. (The latter is represented by an Egyptian-style roasted fish, "which no one does.") There's a billi bi, "a very classic old-school French soup," and a pil-pil, a traditional Spanish hake dish — but a "really fresh version of it" that makes use of celery root puree, chopped hazelnuts, and a few other special features.

Serpa and chef de cuisine Sebastian Martinez (a Volle Nolle alum who was most recently consulting at Koy) have been "bouncing ideas back and forth," and Serpa is excited that the duo can "pretty much do whatever we want," he says. "It's very fun and liberating. I think we really click, and we think the same. That's a huge plus for me, to have somebody who thinks the same as me. It's rare when you have somebody you feel confident in, and I really want him to have a lot of control in the kitchen and creative stuff. That'll let me do that other stuff — fixing the locks! Oh, the ceiling is pouring water! — all that owner and general manager stuff. [Martinez] is a good dude."

Even more than the food, Serpa seems excited about SELECT'S beverage program, particularly the wine. "I've never made a wine list for a restaurant, but I drink plenty of wine, and I think I'm moderately knowledgeable about it," he says. "Every single bottle of wine here I would order and drink and be like, I’m really happy with that." The selection is meant to be seafood-friendly and touches on lots of interesting whites, some orange wines, a sparkling Austrian rose, and plenty more. "In general, the wine list has a lot of lighter, high-acid, briney, refreshing wines on it," he says. Some wines that would be too expensive to pour by the glass are being offered in 375 mL pours (about two glasses).

"I want to be a neighborhood spot so you can come in on a Tuesday and say, 'Let's have a bottle of wine. Let's have two bottles of wine.'"

Serpa stresses an interest in offering "affordable" options, including a number of bottles under $50. "I want to be a neighborhood spot so you can come in on a Tuesday and say, Let's have a bottle of wine. Let's have two bottles of wine. Who cares? And you won't feel like, Oh shit, this place is expensive." (But for the high rollers, there's a single bottle available of a 1996 Château Haut-Brion. That'll be $1100.)

And it's not just wine — there's a full liquor license. Gina Richard, an Island Creek Oyster Bar alum, will be in charge of the bar. "Do whatever you want," Serpa told her. "Fill it up. Do your thing."

When the restaurant opens to the public this Friday, there'll be dinner service for two nights, and then the restaurant will be closed for Easter Sunday. "I'm going to sleep until at least 10 a.m.," laughs Serpa. Dinner will restart on Monday, April 6, and he hopes to start lunch service on Tuesday.

"Lunch is my favorite," he says. "I love when you go out and have this five-hour lunch, drinking wine, having all this food. You go home and want to go to bed — it's 5 p.m. It just feels amazing. Hopefully we'll do a lot of business lunches, but I want to be a nice destination lunch spot, somewhere you can go to have a really nice lunch and sit down with a bottle of wine, European-style."

SELECT Oyster bar will not accept reservations, and there will be neither coffee nor dessert, a nod to the tradition of the North End, where restaurants tend to give business to the bakeries in the neighborhood by recommending dessert elsewhere rather than serving it themselves.