It will be Cambridge's only 'round-the-clock restaurant. 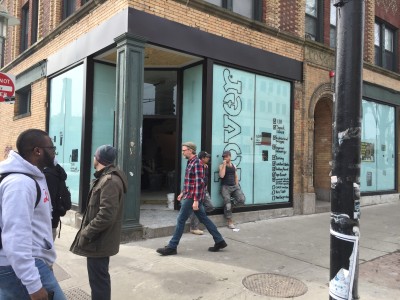 The newest Clover — the sixth brick-and-mortar location of the growing truck-and-restaurant group — opens on April 22 at 496 Massachusetts Ave. in Cambridge's Central Square, the former HiFi Pizza space cross from the Middle East.

CloverHFI, as this outpost is dubbed, will serve a late-night menu (some breakfast items and some new additions) beginning at midnight. Bands who played at the Middle East that night will get to eat for free. Also, there are pinball machines.

Opening day is "Free Sandwich Day," although free really means "pay what you want," with the proceeds supporting "a food-focused cause."

Elsewhere in the Clover empire, the long-promised Newbury Street location "is going to happen," writes Muir on the company's blog. "I know, I’ve been saying that for 3 years, but we have reason to think we’re close. A reason that looks like a building permit. Hang on."