Griddler's Burgers & Dogs to Open on Boylston Street Next Week

Share All sharing options for: Griddler's Burgers & Dogs to Open on Boylston Street Next Week 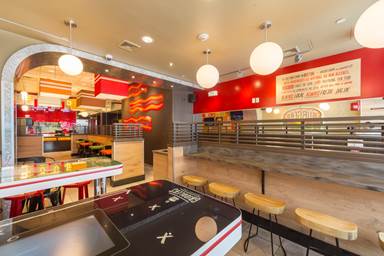 In the works for more than a year, the second location of Griddler's Burgers & Dogs at 134 Boylston St. is poised to open next week, according to Urban Daddy.

The fast-casual burger chain is locally bred by Boston Nightlife Ventures (Wink & Nod, Tap Trailhouse, recently-shuttered Forum). Its original location is in Beacon Hill at 204 Cambridge St. When BNV announced the Boston Common expansion in 2013, the company called it a "prototype," presumably for future expansion. Also that year, BNV president Euz Azevedo told Eater three more stores were coming to the area. The forthcoming location will have an updated logo, interior design, and menu.

The current menu features, as one might expect, burgers and dogs — including single and double burger options with the chain's house Griddler sauce, and more eclectic offerings like the Chowder Dog, a hot dog covered in fried clam strips. Griddler's also has sweet and fun milkshakes in flavors like apple pie and Froot Loops.