Brookline police received a tip about a hidden camera in the handicapped bathroom at Zaftigs Delicatessen — but it apparently happened "a few months ago."

Share All sharing options for: Zaftigs Allegedly Failed to Tell Police About a Hidden Camera Found in the Bathroom 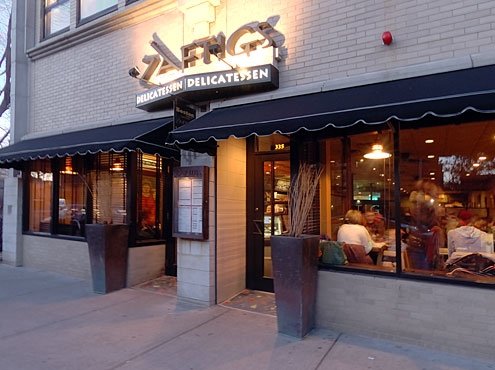 Brookline police are looking into a disturbing incident at the Coolidge Corner location of Zaftigs Delicatessen. The department received a tip from FOX25 regarding a possible hidden camera in the restaurant's bathroom.

"Police say the camera was discovered in the handicapped bathroom months ago and the worker suspected in the incident is no longer employed," reports CBS Boston. "But police only found out about it yesterday and said the deli wasn’t especially forthcoming." The article notes that a Zaftigs manager wouldn't speak with police when they arrived, telling them that all contact had to go through the restaurant's lawyer. "Detectives have no evidence in hand at this point," it continues, "and say the deli’s failure to report a possible crime on the premises is troubling — at best."

The Brookline police department confirms via Facebook that an investigation is underway.

Zaftigs has been open in Coolidge Corner since 1997, serving Jewish-style deli cuisine, from matzo ball soup to thickly-stacked sandwiches. There's also a newer location in Natick.