Welcome back to The Wedge, a regular series where Eater Boston associate editor Dana Hatic delves into cheese-related topics around Boston. In this edition, she sits down with L'Espalier's mâitre d' hotel and fromager, Louis Risoli. 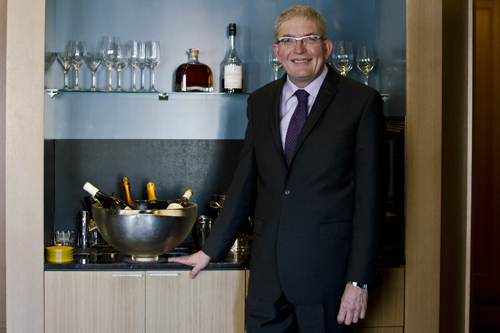 From a second floor dining room at L'Espalier, Back Bay's fine dining spot for French and New England cuisine, the noise and bustle of Boylston Street becomes a silent movie playing in the background and fading to black when out rolls the cheese cart, commanding all attention.

The restaurant is not open yet, and this unfettered access to the cheese selection feels like a luxury. The lineup of ash-covered goat cheeses balances out the blue corner, while an array of hard Alpine-style cheeses and a selection of wash-rind soft cheeses fill out the front part of the cart.

L'Espalier has one of the preeminent cheese programs in the Boston restaurant world. At the helm stands Louis Risoli, a 30-plus-year industry veteran and fromager whose interest in his craft stretches from the history of cheese-making to the science behind it. Under all that, he has a vested interest in introducing guests to great cheese.

Risoli started working at L'Espalier in the early 1980s. He has more or less lost count of the years, but the Ashland native has made the most of his time leading the cheese program.

"When I came here I didn't know a thing about cheese, and I guess no one did," Risoli said. He started learning about it after taking over the program from another employee who moved to Bali. At that time, L'Espalier had a cheese cart with a maximum of 10 cheeses at any given time.

Risoli is a Certified Cheese Professional.

"Pretty much all of them were European," Risoli said, because there just weren't any local options.

Such is not the case these days. The northeastern United States is a hotbed of artisan cheese production, with upwards of 100 creameries operating in Massachusetts, New Hampshire, Vermont, and New York.

Risoli is a Certified Cheese Professional, meaning he has achieved the highest standard of cheese knowledge and service, as certified by the American Cheese Society.

"It requires knowledge of a wide range of cheeses and cheese flavors and styles, how they're made, how best to store them, how to keep everything safe, how to talk about them with people, to match people with what they're looking for," Risoli said.

Over the years, he built up his level of cheese expertise, studied like crazy, and took the requisite test in its inaugural year, becoming one of the first Certified Cheese Professionals in this country. Carrying that title, Risoli does his best to introduce guests to specialty cheeses, a job that has expanded in importance as L'Espalier's cheese selection itself has grown from around 10 when Risoli started to 25-plus options today.

"If you're eating at L'Espalier, there's a very, very good chance you are going to have cheese. And then there might be a very good chance that you come back again because you loved everything, including the cheese, so much," Risoli said.

Guests have a handful of options for sampling L'Espalier's selection.

Guests are welcome to visit the lounge just for a cheese plate.

"It can be done two ways: Most people would prefer to have me or one of my staff prepare a cheese plate for them, something with a nice range of styles," Risoli said. "We're always happy to roll the cart around also, and people can choose their own cheeses." Additionally, guests are welcome to visit L'Espalier's lounge for a cheese plate and some wine.

Some guests come in knowing exactly what they would like, but for those who don't, Risoli plays a huge role in crafting their experience.

"I would find out a little bit about their preferences, if they have them. A lot of people don't, and they want to be surprised, which is a lot of fun. And I'll put together a plate of six, seven, eight cheeses, with a lot of different styles," Risoli said.

He arranges the cheese from mild to full-flavor to give guests a nice progression and a mixture of textures and flavors.

People usually sample seven or eight cheeses, and sometimes if he's preparing a plate, Risoli will add what he calls a bonus cheese — something he's excited about on the menu that he thinks his guests will appreciate.

Along with the plate of cheese, Risoli presents diners with a "cheese map," or a list of the current offerings at L'Espalier, broken down by type of milk: cow, sheep, or goat. Right now, there is even a mixed milk cheese made with Jersey cow cream and goat's milk.

About two-thirds of the cheeses at L'Espalier are local.

"A lot of times, going back not too many years, I'd bring a cart over, and there were certain people and all they would want was European cheese. I'd tell them about these great local cheeses and they'd just sort of roll their eyes a little bit, and they would order only the European cheeses. When I would cut their plate, I'd always slip something local on, just say 'I have a little bonus cheese here for you,' and nine times out of 10, it was their favorite cheese," he said.

Currently, about one third of L'Espalier's cheeses are from Europe. The rest are made in the U.S., mostly in New England and New York, with a few from outside the region.

Starting in about 1990, Risoli said, cheese-making became a solution to a floundering economy rife with failing dairy farms.

"Year by year, just the wealth of local cheese available has really, really mushroomed," he said. With so many resources and artisan cheese makers nearby, Risoli said, "we've really tailored L'Espalier to be a cheese haven."

With 30 current selections and an assortment of themed dinners, L'Espalier is just that.

The restaurant offers a regular schedule of special events, including a monthly cheese dinner, which has been around for about 12 years and is affectionately dubbed "Cheese Tuesday."

Risoli picks a different theme for the three-course dinner each month.

"Sometimes it's based on a certain cheese maker, or it might be based on a region or a style of cheese," Risoli said. From there, L'Espalier's chef de cuisine Matt Delisle tailors the menu to the theme, and beverage director Lauren Daddona pairs a wine with each course. To finish the dinner, Risoli leads the guests in a tasting and discussion of the cheese before the grand finale: a cheese-related song.

"I like to keep myself entertained," Risoli said. A while back, he was looking for something new to do at the dinner and remembered a song from a TV special he had seen as a child that featured an Italian take on Mary Poppins called "Maria Poppina," in which "Supercalifragilisticexpialidocious" was rewritten as "mozzarella, provolone, parmesan, ricotta."

'You come to L'Espalier, you can't get away from cheese. We won't let you.'

"Why I remembered that from when I was 10 years old or whatever, I don't know, but I did, and so I thought that might be fun. So, you know, I was doing an Italian cheese tasting and we brought out this song and everybody loved it," Risoli said.

The following month, people wanted to hear the song again, and it soon became a tradition at Cheese Tuesday. "And then of course I needed new songs, so, now I write them," Risoli said. The first was a take on Sonny and Cher's "I Got You Babe," all about Vermont. He's also written "Don't Stop Blue Cheesing" and many others.

"You come to L'Espalier, you can't get away from cheese. We won't let you," Risoli said.

When he isn't overseeing these special events, Risoli has time to teach people — including his staff — more information from his Rolodex of cheese knowledge.

"And because part of my role is educator — I need my staff to know an awful lot about cheese — so we do briefings every single day. We gather around the cart, we talk about things, we taste them," he said. "My staff is really well-trained."

Risoli can describe the history of the artisan cheese makers behind L'Espalier's selections, he can describe the flavor profile of a cheese from first bite to final swallow, and he can even explain how grass-fed cows produce different milk than hay-fed cows.

"I'm crazy about the traditions of cheese and even the science behind cheese," Risoli said. "I love the whole history of cheese. I love the cultural implications. Right now cheese makers can — in any region of the world — do whatever they want, because we have all sorts of modern techniques and refrigeration, which makes a big difference also."

For Risoli, cheese makers are magicians.

For him, cheese makers are magicians.

The local cheese makers derive their techniques from the old world, but every step along the way to creating cheese calls for a specific tweak that will develop the final flavor profile of the cheese. It all starts with cow, goat, or sheep milk, but the adjustments determine which type of cheese comes out the other end.

If he can discuss some of those nuances — and share a fond taste for a nice Stilton — with his guests, it's all worth it. The best part, Risoli said, is sharing the joy of cheese and helping broaden guests' perspectives.

"It's just so nice to be able to talk to nice people and put together something that they really enjoy, that maybe even blows their mind a little bit," he said. "And with cheese, it's easy."