The national noodle chain is now hiring for positions at its Medford store. 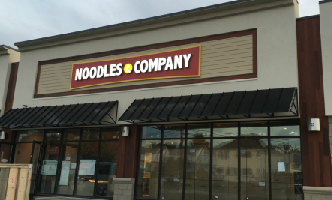 Medford's forecast for November 19 is cloudy with a chance of noodles. The Colorado-based chain Noodles & Company, which has numerous locations across the country, will hold a grand opening for its sixth Massachusetts location at 491 Riverside Ave.

Noodles & Company is known for its customizable, carb-filled dishes — either Italian-, Asian-, or American-inspired noodles — plus sandwiches, potstickers, and more.

A Woburn store recently opened, according to Boston Restaurant Talk, and the company is now hiring full- and part-time cooks, cashiers, and supervisors for its forthcoming Medford store, per a post on Craigslist.

Ahead of its grand opening, Noodles & Co. will hold an event on November 18 to benefit The Coalition for Arts, Culture, and a Healthy Economy (CACHE) in Medford, according to a release.

For the grand opening on November 19, the first 50 guests will receive a coupon for a free dish of their choice. The Medford location will also serve beer and wine.