A long-awaited London-based sushi place is on the way to the Seaport District.

by Dana Hatic@DanaHatic Oct 27, 2015, 10:00am EDT
Via YO! Sushi to Open Its First Boston Location Early Next Year [BRT], Conveyor-belt sushi restaurant opens at International Plaza next week [Tampa Tribune], and London-Based Yo! Sushi May Convey Sushi Around Boston [EBOS]

Share All sharing options for: Yo! Sushi Plans to Open Boston Location 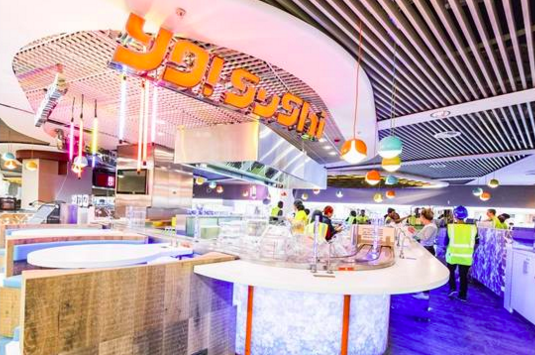 After years of rumored expansion, Yo! Sushi is finally making moves to open a location in Boston, according to Boston Restaurant Talk.

The London-based chain known for serving up sushi on a conveyor belt has one restaurant in Sarasota and a Tampa spot in the works. It also has plans to add more in the United States, including one in Boston in early 2016, per an article in the Tampa Tribune.

Rumors have been circulating about Yo! Sushi moving into Boston since 2010, but a specific location has not been named. The "kaiten" (conveyor belt-style) delivery system has been part of Yo! Sushi since it first opened in 1997. The restaurant offers a selection of rolls, buns, soups, salads, and sashimi.

Update: Alison Vickers, who oversees Yo! Sushi's international expansion, said the chain has signed a lease for a space in Seaport Square, next door to the forthcoming Shake Shack. Yo! Sushi is working on the project with WS Development (of The Street in Chestnut Hill). Vickers said they wanted to team up with a local developer that had a feel for Boston.

The Boston restaurant is in the early stages of development and there are a number of bidders looking to build out the approximate 2,500 square feet of space, which will accommodate Yo! Sushi's trademark conveyor belt serving system.

"We've got a floor plan, we're working on the design right now," Vickers said. The company will use its UK architect in conjunction with a local architect.

"We think we get the quirkiness and the fun of the UK with really efficient American" style, Vickers said.

Yo! Sushi opened two new locations on Monday: one in New Jersey and one in Tampa.

According to Vickers, the Boston store will be the flagship for the U.S., as it will be the first location outside of a mall. The company will soon look for a general manager and a head chef, who will undergo training in the United Kingdom before returning to head up Boston's restaurant, which will offer a standard Yo! Sushi menu, plus takeout and beer, wine, and saki, to cater to both the lunch and after-work crowds in Seaport.

Vickers, who spent six years in Boston working with the Back Bay Restaurant Group in the 1990s, said she was excited to bring Yo! Sushi to a city she knew so well.