From a Nick and Nora to a highball glass, take a small dip into the wide world of glassware.

Share All sharing options for: The Boston Shaker's Adam Lantheaume Wants You to Have Glassware You Love

Adam Lantheaume's interest in glassware began at the B-Side Lounge (may it rest in peace.) For 10 years, the beloved bar sat on a corner in Cambridge, where Lord Hobo is today, serving up classic cocktails. Lantheaume, a regular, became enamored with the bar's cocktail glass, a pretty large incarnation with a decorative stem. "I said, 'I have to track down this glass and figure out where it comes from,'" recalls Lantheaume. (He ended up buying a couple right from the bar.)Now he carries the glass at his Davis Square shop, The Boston Shaker, and while the glass isn't a big seller, "that connection is very nostalgic."

"There are so many types of glasses," says Lantheaume, but he gives a rundown of some of the ones most commonly found in the cocktail world. First, there are the up glasses, which are on stems: coupe, cocktail, Nick and Nora, Manhattan. "Basically, if it's got a stem and it almost looks like a wine glass, then it's an up glass," says Lantheaume. The Nick and Nora glass — a dainty glass — is named for the protagonists of the 1930s and 1940s film series, The Thin Man (not for the characters in a 2008 Michael Cera rom-com). Back in the day, the glass would typically hold around three ounces, but they're somewhat larger now. You'll see many in the four-and-a-half ounce range, and Lantheaume's store currently stocks a six-ounce model. 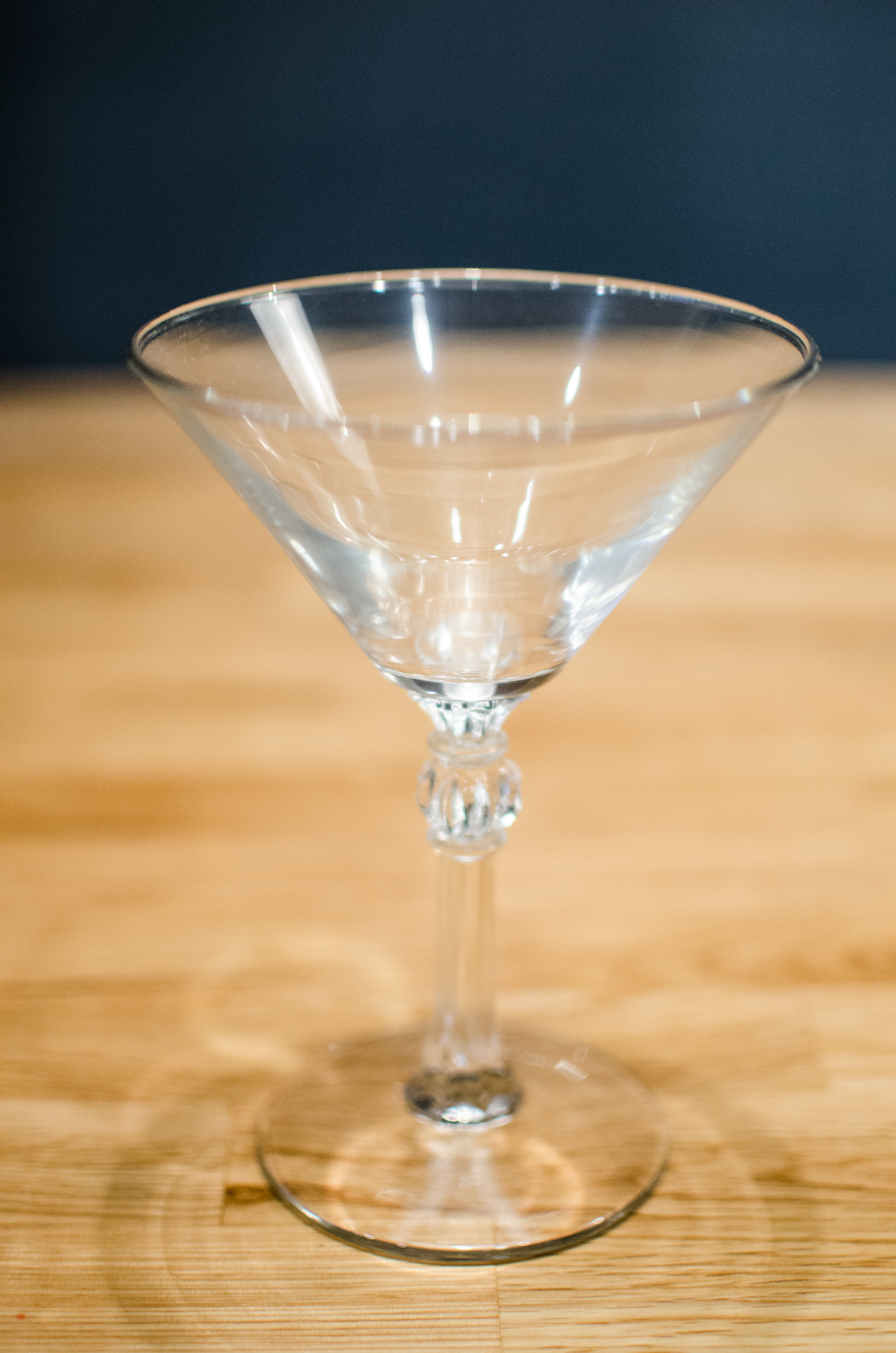 And then there are the tall and stemless "chimney-style" glasses, including highball and Collins glasses. If you order a gin & tonic or rum & coke, it'll often be served in a highball glass.

The list of glass types goes on — champagne flutes, shot glasses, etc. "Nobody knows for sure [about the origin of the shot glass]," notes Lantheaume, but one theory is that "cowboys would empty out the container that held their gunpowder and their buckshot and use that as a drinking glass."

For someone with a keen interest in glassware, Lantheaume does make a confession: "I'm a believer that you can drink your negroni in a coffee mug or a shot glass, and for the most part I think it will taste the same. I'm a big believer in that you should drink what you want, how you want."

But there are some logical drink-and-glass pairings. Drinks that are shaken or stirred and served without ice, for example, are most likely to be served in an up glass (which doesn't have much room for ice). The stem helps keep your hand away from the drink, which helps it stay cooler longer without ice. On the other side, ice-filled drinks are most often served in highballs because there's enough volume to accommodate that ice (and often a straw). So, in a way, it comes down to the amount of ice in a drink. "[Thinking about ice] is a good way of getting close to the 'right' glass for the job, the glass that will be the most enjoyable," says Lantheaume. (Imagine drinking an icy cocktail in a martini glass — it's not easy. There's sloshing.)

So there are some helpful guidelines, but there's plenty of room for doing whatever makes you happy or using whatever glass you've got available. The key is just to make the drinking experience as enjoyable as possible, whether that means putting a comfortable amount of ice in a glass or picking an elaborate tiki mug or serving a Moscow mule in a traditional copper mug.

When asked whether there's a glass he considers to be overrated, Lantheaume names the cocktail glass, despite that shape being his initial entry into the world of glassware. "It's not the best vehicle for what you're trying to do," he says. "It's so easy to spill, and it's not easy to hold or drink out of, especially if you're standing."

To build a solid home collection of glassware, he recommends starting with a double Old Fashioned glass (you can use it for drinks like gin & tonics and rum & cokes, even though it's not quite the same as a highball) and a decent up glass, whether it's a coupe or Nick and Nora or something else. Beyond that, it depends on your personal drinking style. "Put your effort, space, and money where your interests lie," says Lantheaume. "Have glasses you like. You don't need a thousand of them, and you don't need every variety, but whenever you drink something, whether it be a glass of water, or a smoothie, or a cocktail, or a glass of wine, it should be an enjoyable experience. Have glasses that you like that fit well in your hand, that are durable, that you want to use — they don't do any good in a cabinet. You want to take them out and enjoy them. Have glasses that you like, and use them often."