Todd Maul Makes Cocktails With a Side of Science

Share All sharing options for: Todd Maul Makes Cocktails With a Side of Science

Does the phrase "rotary evaporator" trigger bad memories of college organic chemistry lab? Forget those. In Todd Maul's domain at Cafe ArtScience, the rotavap is an invaluable piece of his creative cocktail puzzle, along with other tools that look like they came straight from one of the countless labs in the Kendall Square neighborhood.

"There are three things you don't want to get me talking about," says Todd Maul. "Moby Dick, furniture, or drinking." If you happen to be fan of both Moby Dick and Plato's Allegory of the Cave, you may want to ask Maul about his thesis, which he left unfinished before heading to North Bennet Street School to learn furniture-making. And if that pathway seems random, his next step will seem even more unexpected — becoming a bartender with a particular interest in using scientific equipment to enhance his cocktails. Maul doesn't have a science background, but with Cafe ArtScience located in the heart of tech-heavy Kendall Square, he's surrounded by people who do, and by asking the right people the right questions and having some chance encounters with people who come to drink at his bar, Maul has built up an arsenal of high-tech toys and the know-how to use them in a variety of unexpected ways.

In Maul's mind, there are clear parallels between furniture-making and bartending. He recalls learning to sharpen a hand plane at North Bennet and then using that to flatten a board to the tolerance of a newspaper — "it takes a while." Next, the students went into the machine room and flattened a board in a matter of seconds. "Bartending is a trade just like making furniture," says Maul. "Why exactly aren't we looking at technologies that are going to move this trade into the future — and at certain points, into the present?" 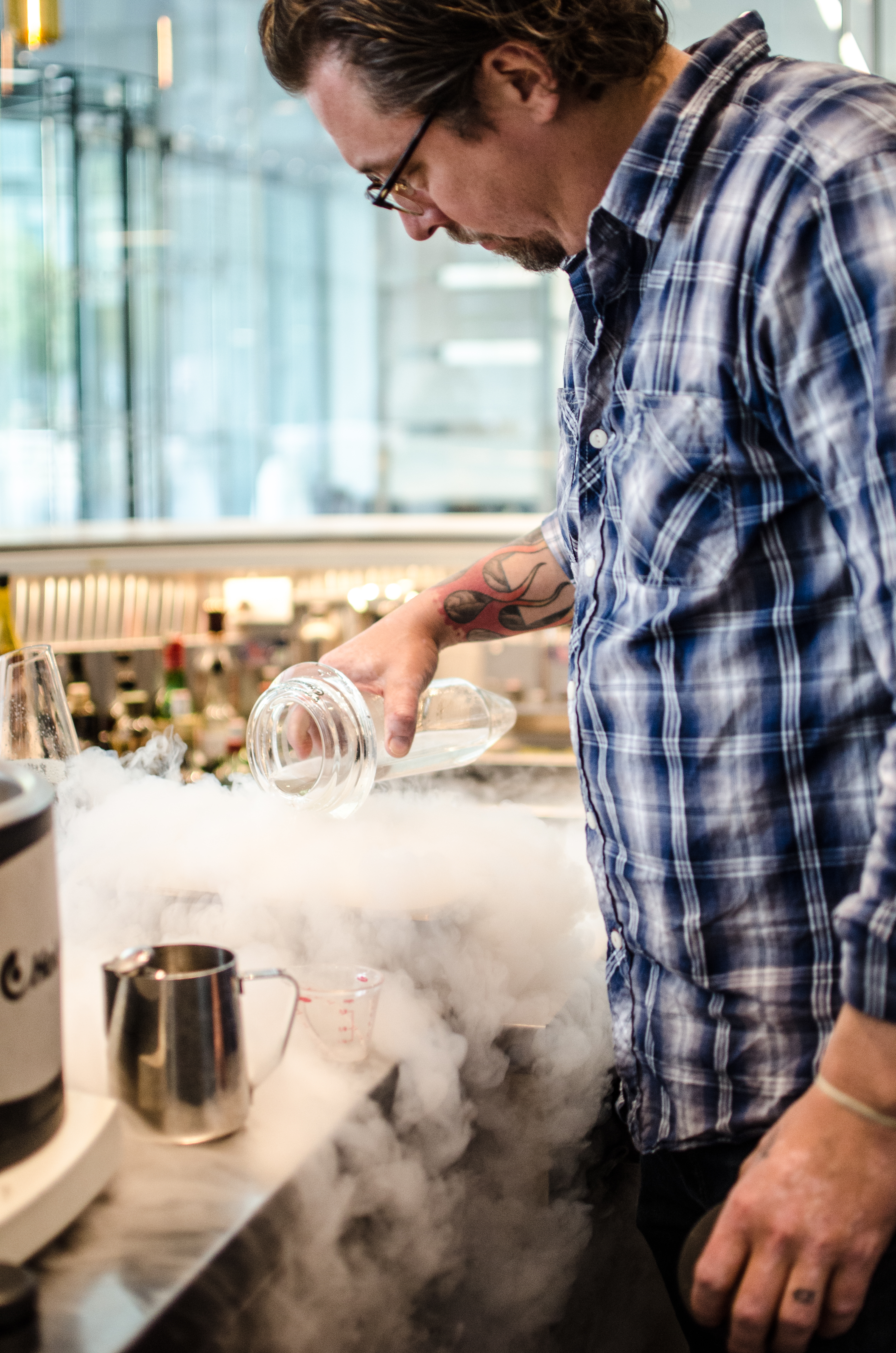 "Instead of looking at a system that already exists and thinking about how to better it," he continues, "why not rethink it and look to the effect you're trying to achieve and then building a system to achieve the effect?" When it comes to both furniture and cocktails, he takes this approach. When you initially sketch something out, it's "untainted, completely cerebral," but then you have to turn it into something real. "How would I put this together? What materials would I use?" says Maul.

In furniture-making, there's a question of whether furniture is utilitarian or art. "There has to be this idea of where you walk the path right in between," says Maul, who finds that the same applies in cocktails. "A drink in my opinion should be aesthetically very pleasing and utilize as many of the senses that you can conjure into it, but it also has to be utilitarian in the idea that it is a beverage. I'm drinking it. It has to be recognizable as a beverage. Ultimately one side can't take over the other."

Clarifying Juices in the Centrifuge

When using a centrifuge, you're separating out particles in a substance by mass. To picture clarification of a juice, imagine orange juice with pulp versus orange juice without pulp, Maul says, but take that down to the level of a very tiny particle. "Clarification doesn't need to mean that it's perfectly clear," he notes, "because you don't want to damage the flavor. We spin ours at 10,000 rotations a minute, and it pulls out all this silt. We pass it through a very, very fine mesh. What this does is basically strip out the low, heavy acid notes, so you're able to create a much brighter, dryer cocktail, be it lemon juice, lime juice, or orange juice." Plus, clarified juice stays fresher longer.

Another neat thing about the centrifuge, according to Maul: It acts a bit like an office water cooler in that people from different departments find themselves gathered around it, sharing ideas. The chef uses it, the pastry chef uses it — everyone ends up at the centrifuge.

To strike that balance between a utilitarian beverage and an artistic one, and to use efficient means to get there, Maul began to get interested in incorporating technology into the process. After reading about centrifuges in Nathan Myhrvold's Modernist Cuisine, Maul started talking to "some guys who were getting PhDs at Harvard" about what type of centrifuge he'd need. He found one on eBay (which he doesn't recommend), started using it, almost accidentally blew it up (don't pour liquid nitrogen into a centrifuge), started to realize its "limitless possibilities" — and then it broke. But before it broke, he figured out clarified lime juice.

"It took me another year to work out how to use that acid note," he says, because at first, he just used it in the same way as regular lime juice. "It was very interesting because you don't know what you have. You try it, and you're like, 'Oh wow, this is really cool.' But you have to kind of sit with it for a while because you're really shifting how you look at acid in a drink."

Before long, Maul was ready to branch out. At Clio's 15th birthday party a few years back, former Clio pastry chef Alex Stupak — now the owner of a well-regarded Mexican restaurant group in New York — was in town for the occasion. (Maul worked at Clio prior to opening ArtScience.) Maul heard someone ask Stupak why he, a pastry chef, would open a Mexican restaurant, and Stupak responded, as Maul recalls, that "he did his best work when he was kind of agitated and nervous about what he was doing." 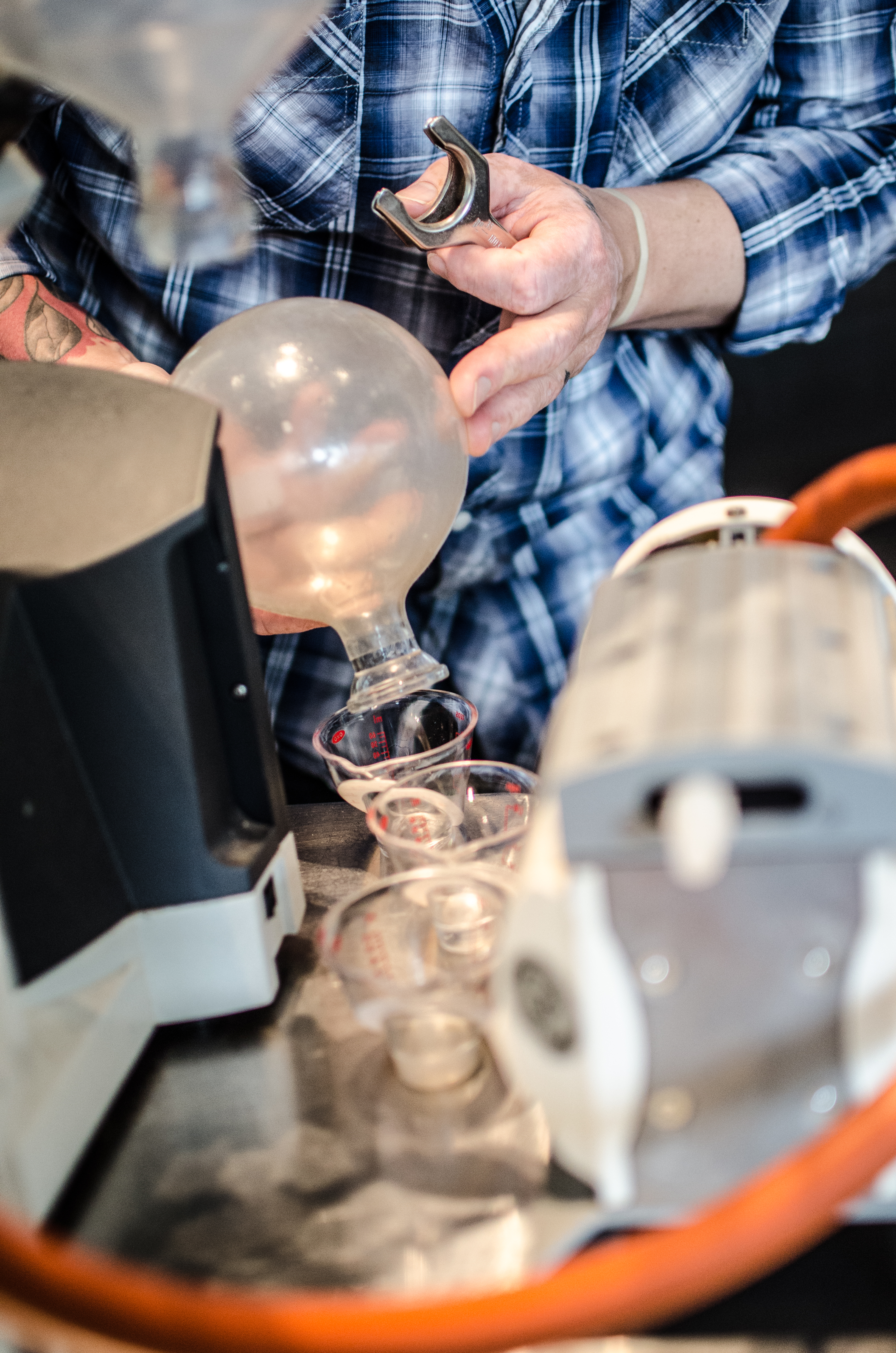 "That's something that really rang true to me," says Maul, "so then I went out and bought a rotavap, which was shy of $10,000. Floating that one to my wife was really interesting. 'Yes, I like to not know what I'm doing because it makes me work better...'"

The rotavap allows Maul to make "essences" and "paints" — "you're doing fractional distillation," he says, "so basically you're slicing off flavors; you're infusing something." Maul takes what he wants to extract — perhaps Lillet Blanc or rosé — puts it in a solvent (generally vodka, although he wants to explore other solvents), and then puts that liquid into a flask in the rotavap. A vacuum system brings the pressure in the flask way down, which allows the liquid to boil at a lower point than it would under normal pressure conditions. So, the liquid boils without being intensely heated, and the vapors travel up from the flask into a piece of the rotavap known as the "cold finger."

The cold finger is chilled with vodka that Maul flash-freezes with liquid nitrogen — which, he says, is the only use for liquid nitrogen in a bar. Used in drinks, it's "gimmicky and dangerous," he says. "There's no need for it. You can achieve much more interesting effects in other ways."

In the cold finger, the vapors re-condense and drip down into a collection flask. As the process goes on for longer, different stages of distillation are achieved — analogous to the various stages of candy-making, with some visual cues between stages — so with plenty of experimentation, Maul can figure out exactly how to pinpoint the precise flavor he's looking for. The result? An "essence" that can be added to cocktails, with just a few drops making a huge impact, be it sweet or bitter or something else. And he reduces what's left behind in the first flask, turning it into a "paint" that he swipes inside cocktail glasses with an actual paintbrush. "It creates a time release," Maul says. "What you want to be able to do with it is for it to be an idea that slowly falls into solution. It changes the drink over the course of your drinking it."

The equipment, the experimentation, the fun results — it all goes towards a larger goal. "If I were to wish one thing, it's the idea that the restaurant is a bit like a think tank," says Maul, "where we're all moving towards a common idea, and it's no one person's idea. We all take ownership and move forward. That, to me, seems much more interesting than, 'This is Todd Maul's bar. I came up with these ideas, and the rest of these guys are fucking plebes.' That seems overly harsh and conceited and nothing that I could actually carry. I say it flippantly, but it's true: I'm the lowest common denominator here. Everybody does their job better than I do here, so I look at it like that. There's the organic nature of asking questions and wanting just to be better at what you're doing."