"I was at the Ritz Carlton in Boston, and I cut myself really badly on my first day in the kitchen. I needed stitches, but they just told me to go back to work. I have a great scar."

Steve DiFillippo, owner of Davio’s, provided the following excerpt from his book, It's All About the Guest:

"I was nineteen years old, a sophomore at Boston University, and working at Seaside. I was in the kitchen late one night when a gorgeous server named Maria sailed in. She was topless except for whipped cream she’d arranged to cover her nipples. She shook her boobs at me, causing the white stuff to fly all over and hit me in the face. 'What do you think of my Halloween costume, Steve?'

I thought it was pretty amazing that she even knew my name. I wiped my face and licked whipped cream off my finger. 'I, uh, I love your costume,' I said. And I did. It was a truly great Halloween costume.

'Cool,' she said as she waltzed away.

'You know,' I said to myself, 'I really do have a future in this business.'

Maria and I wound up going out drinking after our shift. Let’s just say that my sexual education was enhanced that evening—and not just with whipped cream. When I woke up the next morning with Maria, who was even hotter with her uniform off, I thought once again, 'This is awesome!'

Not long after, I was going over our inventory with the chef, Ricky Gordon, when I thought about this incident. In a flash it hit me how we could save a little money on our food costs. 'Hey,' I said, 'we should make our whipped cream rather than use the canisters.'

'Because there’s never any gas in the cans. People go in there and suck on them to get high. We wind up throwing the cans out. If we make our own whipped cream, we can cut down on waste.'

My point is this: Although those breasts burned themselves into my retinas, my eyes have always been on the money. As a kid I dreamed of being more successful than my father, just as he had outdid my grandfather. I grew up with a comfortable, upper-middle-class lifestyle, with a nice house and a pool, and I always wanted to have something similar for myself. Looking around at the restaurateurs on my street, I realized that they all had pretty nice lifestyles, too. 'Geez,' I thought, 'this restaurant thing might make sense. If I do a good job and take care of people, I could make some good money someday.' I was never interested just in making money, but in my mind money has always been part of the endgame of owning a restaurant."

"On my first day of work at Seasons [1984], I was nervous and alone standing in a hallway, when an elevator door opened and out popped the ever-energetic and friendly Susan Regis [UpStairs on the Square, Shepard (coming soon)] to welcome me. We have been friends ever since."

"Jay's on Stuart Street. That was interesting. There were three Asian dudes who ran the woks, a girl on garde manger, and then me with a six burner and a little grill where I would cook all the ‘fusion’ food. I just remember it being completely crazy, no cohesiveness to when dishes were picked up, and total pandemonium. Peter McNeely used to come in all the time. It was a big glassed-in kitchen in the middle of the dining room. It was my first exposure to multi-ethnicity, both in food and working relationships, and I remember being completely overwhelmed. That being said, I was super green then too."

"Getting my first Globe review at Aigo Bistro :( but soon after catching an amazing break when Rene Becker (now of Hi-Rise Bread Company) wrote a favorable article in Boston Magazine. He saved my self-esteem. I’ll never forget it! I think he used to be the restaurant reviewer for Boston Magazine before Corby was!"

Johnny: "I was doing breakfast, and I was overcooking the omelettes. The chef was yelling at me and was saying 'no brown, no brown.' That was my first experience. That was at The Federalist."
Kosta: "Go back even further. He was doing breakfast, going in to work early in the morning, and he has his knives with him. And one morning his knife bag opened and all of his knives fell on the train."
Johnny: "People were looking at me, scared shitless. I’m like, 'Guys, I’m a chef; it’s just a knife set. It ripped on me.' It was early in the morning. People were so scared."
Kosta: My first Boston restaurant memory would be Haymarket, the vegetable produce area."
Johnny: "That was a crazy year."
Kosta: "We would go there with our dad, and we would buy vegetables for the restaurant. I just remember having to go into Boston, and that was a big deal."
Johnny: "I think a lot of people have never been exposed to the Haymarket. That was an experience. You left that place like, 'Wow.'"
Kosta: "This was the '80s. It was a lot grosser than it is now. I was haggling over the price of tomatoes at eight years old. 'I’ll give you $5.' Guy’s like, 'You’re 10; you’re going to give me what I charge you.'"

"Working in Faneuil Hall fresh out of high school. The ‘80s were fun!!"

"When I came down with a horrible flu in 2004 after working four weeks at The Butcher Shop, I was fired for missing so many days. It was Thanksgiving week, and they were slammed and I had let everyone down. (I was a prep cook by day and panini maker by night.) It was a kick in the nuts; I had never been fired from a job in my life and had always thought of myself as very responsible. Even at that time I could see how it might have looked like I was blowing off my job, but I was so sick I could barely get out of bed." 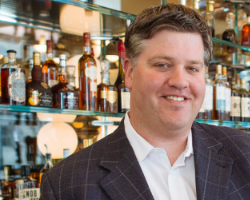 "At Grill 23, the first chef I ever worked for was Robert Fathman [now at Les Zygomates and Bel Ari], a really good guy. Robert had come in from California and had a real background in seafood. Bringing him to a restaurant like Grill 23, a real classic steakhouse, left a lot of people scratching their heads, but it really helped shape the grill into what it is, which is more like an American seafood grill, not so much just steak. Robert was very influential in setting us on that path.

So my first job in the kitchen was to go down and work for Robert. I had my chef coat on and looked all clean-cut, and I looked down and there was a chef with tattoos all up his forearms, and he looked like he had just run ten miles in a race, sweating, running all over the place. That was my first foray into this understanding of the pace; it’s one thing to cook in a kitchen at your house, but to walk into a kitchen like Grill 23’s, you see that from the minute you clock in to the minute you clock out, it’s a sprint.

I don’t think I had any clue what I was walking into, and I’m not going to lie, I got my butt handed to me a lot of nights. I got pulled off the line the first couple of nights, and I got relegated to picking spinach. I think I picked spinach for eight to 12 hours a day for five straight days before they let me back on the kitchen line. But once I got back on I never went back off. The biggest punishment you could ever get was having to pick spinach. I still have nightmares about it."

Before coming to Boston I'd worked on the Jersey Shore in what New Yorkers call a "candy store" and then at a beach club where I grilled everything.

I was living in Allston — naturally — with a group of friends — naturally. Most of them were nurses or going to law school. One taught in Somerville, and she told me about a place that made its own ice cream. I thought that was impossible; ice cream had to be made in a factory like the Friendly's plant or the Sealtest plant you passed on the Mass. Pike. One night I was eating another chocolate chip ice cream when we noticed a Help Wanted sign for a night-time cleanup person. So while I was eating an extra portion of chocolate chips I was interviewed.

The owner said that the cleanup job required someone who was good at cleaning. I of course said that I was clean and could do the job. Then the owner asked a question that sent me back to encounters with assistant principals: Did I really know what clean is? And my reptilian mind thought, Oh, he wants me to lie to him. So I said, I do indeed know what clean is. And in my neighborhood I am well-known for being clean and having a clean room. All my friends think I'm very clean.

I do think I got better at cleaning, particularly ice cream stores. As years past several friends were adamant that I spent too many late nights cleaning the store, but I actually found a simple satisfaction mopping while I reviewed the day and planned the next."