Share All sharing options for: Chris Coombs Used to Treat Himself to a Roast Beef Sandwich With an Hour's Pay 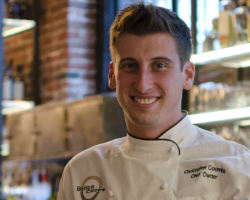 "There is a roast beef and fried seafood place called the Land 'n Sea in Peabody that I went to all the time after high school," recounts Chris Coombs, executive chef/owner of Boston Chops, Deuxave, and dbar. "I still go back to Land 'n Sea for nostalgia. I get the chicken kebab sub, which is a Greek pita wrap with chicken in it, and sometimes I do still get the fried clams and roast beef sandwich to bring me back to my childhood." The family-run restaurant has been around since 1972.

Speaking of roast beef: "The one thing that is a standout on Boston’s North Shore — and has been for years — is their roast beef restaurants," he continues. "The one I always went to was Bill & Bob’s Roast Beef in Peabody. I remember a roast beef sandwich served on an onion roll was $4.75, and I made $5 at my job, so I would always take one hour’s pay and treat myself to this sandwich." Bill & Bob's still exists; there are also locations in Salem and Woburn. The specialty is the roast beef "3-way," which is topped with barbecue sauce, mayo, and cheese. In fact, Coombs paid tribute to that very sandwich during a previous Eater theme week, Greasy Spoons Week, by creating a special dish at Boston Chops.

Like Ben Weisberger of No. 9 Park, Coombs also has childhood memories of Ground Round. "My family would go to the Ground Round in Peabody for special occasions," he remembers, "but it doesn’t exist anymore. I would always get the potato skins and a Caesar salad. That is the first place that I ever tasted a Caesar salad growing up."

And when it was time for something a little nicer: "Once a year, we had a special occasion restaurant that my family would go to, and that is the Sylvan Street Grille," says Coombs. "That was saved for special birthday dinners, and I thought that was fine dining. It was a treat when my family would go there, and I still love that place because of the memories that I have from those times." The restaurant opened in Peabody in 1989 and expanded to Salisbury five years later. Both locations remain open today.