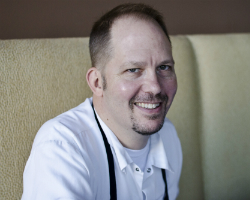 "There is one thing that puts the fear of God into the mind of a teenage line cook on the Essex Causeway — Fisherman’s Platter," says Keith Pooler, chef/owner of Bergamot and the forthcoming BISq. "You definitely learn speed and organization when you are coordinating the fry baskets during tourist season. I love anything fried. In my household, we brought out the Fry Daddy often and cooked anything from fried smelts to fried dough. I remember trips with my grandparents on the weekend when I was young to two spots in particular to get our dose of fried clams. The Clam Box in Ipswich and J.T. Farnham’s in Essex are the two that I have fond memories of and visit to this day at least once a year. I would not be able to choose one over the other. When I was in New York, cooking articles started being published about where the best clam shack was, and it would make me homesick. Now it is not which one to go to, but the best time to go to avoid the line. I am obviously a North Shore native and still hold strong to my roots. Any time I have off during the summer, it is where I head."

The uniquely-shaped (and appropriately-named) Clam Box was built in 1938 by Dick Greenleaf. "Although we don't claim to have invented the fried clam," notes the restaurant's website, "we believe we have perfected it." Take that, Woodman's.

J.T. Farnham's opened in 1941 as Wilson's Fried Clams; the name later changed to Farnham's with an ownership change. Since 1994, it has been J.T. Farnham's; the new owners Terry and Joseph Cellucci wanted to keep the Farnham name to honor the restaurant's past but added their initials in front to represent the "new chapter."