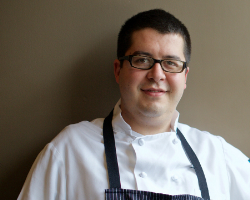 "I grew up in Worcester," says Ben Weisberger, chef at No. 9 Park, "and as a child I can remember going to the Ground Round, which was a very general bar and grill. They had a clown that walked around the restaurant and gave out lollipops to all the children. They also had a scale where they would charge the parents in the party based on the weight of the child. Kind of crazy, right?"

Ground Round, a casual family-oriented chain established in 1969, used to have widespread Massachusetts locations (and beyond the state as well). The clown that Weisberger mentions was named Bingo, and diners got popcorn at the start of the meal instead of bread. Peanuts were also provided — and diners were supposed to throw the shells right on the floor.

The company declared bankruptcy in 2004, abruptly and messily closing nearly 60 corporate-owned locations. Ultimately, a number of franchisees banded together and bought the company, and the new Ground Round still exists in other parts of the country.

Here's a Ground Round commercial that aired in 1981 in Chicago (which is also now devoid of Ground Rounds):