When Jody Adams Was a Kid, Restaurants Were 'Exotic and Magical'

Share All sharing options for: When Jody Adams Was a Kid, Restaurants Were 'Exotic and Magical' 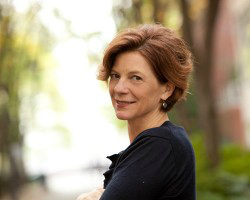 "While growing up, we never visited restaurants," says Jody Adams (Rialto, Trade). "The closest thing we came to restaurants was picking up pizza from Caserta Pizzeria on Federal Hill [in Providence, where she grew up]. (They had the best pizza back then, and spinach pies.) We never dined out, except when traveling in Europe. Restaurants were always these exotic and magical places to me, which is why I was drawn to them as I got older."

Caserta, which still exists, opened up in 1953, and lays claim to originating the spinach pie Adams mentions, which they call the "Wimpy Skippy." It's stuffed with mozzarella, pepperoni, and black olives.

"On Federal Hill, restaurants come and go as fast as the seasons," according to Rhode Island Curiosities: Quirky Characters, Roadside Oddities and Other Offbeat Stuff by Seth Brown (2007). "But one of the few restaurants to endure for decades is the favored pizza parlor of the Providence people: Caserta Pizzeria...Owner John Campagnone says that the secret of his success is simplicity...Caserta Pizzeria offers all of five toppings. And simplicity works, because Caserta's is well-known throughout Rhode Island, though it's hard to say whether they are more famous for their pizza or the Wimpy Skippy." Brown also notes that the restaurant is cash-only — and in keeping with the theme of simplicity, there is no silverware.