Share All sharing options for: Molly Hanson Remembers Panda Punch at Joyce Chen and Soups at The Wooden Shoe 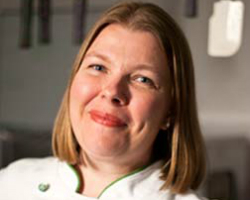 "I grew up in Stow, Massachusetts," says Molly Hanson, pastry chef at Grill 23 and Post 390. "My parents brought us into Maynard to The Wooden Shoe on a regular basis. They ended up becoming friends with the couple that ran it, Ted and Hilda Tumelaire. Hilda made wonderful soups, and Ted was a talented pastry chef. They left for Vermont, and Ted became an early pastry instructor at the then-freshly-opened New England Culinary Institute. We even went up to Vermont to visit them. I ended up attending New England Culinary years after he retired."

The photos above and below, provided by Hanson, show her family visiting the Tumelaires in Vermont for Hanson's father's fortieth birthday. "Mr. Tumelaire made a wonderful cake for him," she notes. She is 10 years old in the top photo (seated closest to Tumelaire).

"The other restaurant I loved was Joyce Chen," Hanson says, "where I remember eating Peking noodles and drinking panda punch. It was very exciting to drive into the 'city' to have Chinese food. I remember how the entrance looked, the orange and cherry garnish in the punch, how the noodles looked and tasted. It was amazing."

Joyce Chen opened her first restaurant in Cambridge in 1958 and was "credited with introducing Mandarin Chinese food to the American palate," according to the Boston Business Journal. In 1973, she opened a larger restaurant, also in Cambridge, and eventually branched out into public television, cookbooks, and a line of Chinese specialty foods and cooking utensils.

Last year, the United States Postal Service included Chen, who passed away in 1994, in a Celebrity Chefs series of postal stamps.

Here's the exterior of her original restaurant at 617 Concord Avenue in Cambridge (via the official Joyce Chen Foods website):