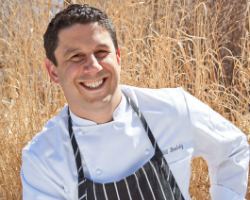 "When I think of classic Boston restaurants, Faneuil Hall’s Durgin-Park is always first to mind," says Bill Brodsky, the newly appointed chief culinary officer of Boston Nightlife Ventures (formerly chef/owner of the recently shuttered City Landing). "A little background; my father went to optometry school here in Boston (NE School of Optometry), and when we were growing up, he never missed an opportunity to tell us about the thick prime rib, molasses-laden Indian pudding, and more importantly, about the sassy ‘characters’ that worked there."

"So when one of my brothers graduated from Berklee, he finally took us to experience it for ourselves," Brodsky continues. "Although I was only nine or 10 at the time, I can still remember to this day my father’s sheer delight as we were seated and the server threw our silverware on the table, almost in disgust. And when one of us asked our server a question, it was always answered with a big ol’ side of sarcasm. He just loved it…and I did too. We went back there a couple of years ago right before I opened City Landing, and it was fun to see him continue to get excited about the prospect of some Indian pudding with vanilla ice cream. Perhaps this is why DP still stands the test of time."

Durgin-Park has existed by Faneuil Hall under a variety of owners since 1827 (and a small restaurant was located in the same spot for nearly a century before that). The original owners (from 1827) were John Durgin and Eldridge Park, hence the name.

As Brodksy mentions, the restaurant has a reputation for a special kind of attitude, although the roughness has softened a bit over the years.

"Way back when, in 1826, when this was all a market, we'd be open from 6:30 in the morning until 2:30 in the afternoon," head waitress Gina previously told Eater. While she obviously hasn't been around since 1826, she has been there for 40 years. "All the meat men and fish guys, as well as the produce men, would come in...at 6:30 in the morning, all tired, and they'd give the servers a lot of garbage. It got to the point where the servers started to give it back, and it stuck. So a lot of people come in looking for the abuse, but we've toned it down a lot. We still do it, but we just have to use our mind's eye to see who we can do it to. A lot of the younger people don't understand how it was, and they might take offense to it. But it's never meant to offend anyone. It's all done in fun. You can't mean to be sarcastic."

To go with its age, Durgin-Park serves classics New England dishes, like a clambake (the steamers might be "sandy," warns the menu), chowders (fish or clam), Yankee pot roast, baked scrod, baked beans, and the like.