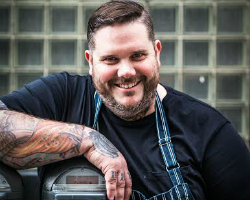 "I remember this great roadside spot in Danvers called Yoken's, which served really cheap, greasy fish and chips, clam strips, and milkshakes," writes Matt Jennings (of the upcoming Townsman, set to open early next month). "Their logo was a smiling blue whale with the motto ‘Thar she blows!’ My dad thought that was hilarious, so it became a family slogan to blurt out in the car."

Yoken's also had a location in Portsmouth, New Hampshire. The two restaurants were "hugely popular" due to their "affordable and decent seafood dishes, friendly service and family-friendly environment," writes blogger Eric H. (The New England Travel and Vacation Gazette), although he notes that "if it were in business today, we'd regard it as a New England tourist trap...it was basically Howard Johnson's with a sea captain's hat."

Jennings also recalls another restaurant: "We used to head to Cambridge to eat at Aku Aku, a Polynesian family restaurant that was real ‘80s, with flaming volcano shrimp and classic over-the-top Polynesian steakhouse dishes that we would order from a numbered menu. It looked like a dark tiki room with big murals on the walls. Their giant pupu platter was the best."

According to Gayot, Aku Aku was "Boston's version of Trader Vic's" with a "kitsch quotient...through the roof," from "fish tanks" to "cheesy lighting." The food: "What else but chop suey, chow mein, and all their age-old friends."