Share All sharing options for: To Die Dreaming: Francisco Millan on Childhood Trips to El Oriental de Cuba and Bernard's 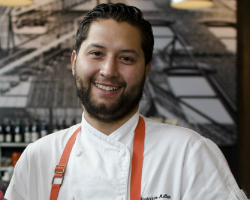 "Having grown up in Brookline/Boston for my entire life and even having gone to college at BU, there are two restaurants that are influential to me as a chef and also have special meaning to me," says Francisco Millan, chef de cuisine at Row 34.

"The first restaurant is Bernard's in Chestnut Hill. I have been going to this restaurant since I was four years old. My brother Julian first introduced me to the classic Chinese restaurant, and I have been going back ever since. Bernard Leung is the owner and travels to China often to find inspiration for new dishes. The staff knows all the regulars by first name and always takes care of you. The food is good! Hot and sour soup and Peking raviolis are always my go-to for appetizers. But then I always change it up for entrees. Pan-seared chicken with black bean sauce; Thai spare ribs that are spicy, sweet, and sour that hit all of your palate. The pan-seared noodles with beef and extra sauce are really good, too. This restaurant is what first turned me on to Asian flavors, especially my addiction to black bean sauce. It continues to influence my food at Row 34. I am sure my brother disliked hearing me beg as a young child that the only thing I wanted to eat was Bernard's, but looks like it paid off in the long run. But it truly is a special place for me and my family."

Bernard's first opened at the Mall at Chestnut Hill in 1989 but moved to a bigger space nearby (at The Street in Chestnut Hill) in the middle of 2013. Now, there's space for about 120 diners in the dining room and 25 at the bar. "We have the same menu, for the most part, the same staff, and the same consistent, fresh food," general manager Allan Lam told the Newton Patch in 2013. "We combine excellent food and excellent atmosphere, just like we always did."

"The other place that is memorable to me," says Millan, "is El Oriental de Cuba in Jamaica Plain. My dad first introduced me to this restaurant as a young kid because a lot of his old friends cooked there when it first opened. I go back to El Oriental when I am craving/missing my father's home-cooked yet super flavorful food. I almost always get the same thing, and that is mofongo (which is fried green plantains that are smashed and mixed with a garlic oil and chicharron, which is fried pork belly). I then get the Cuban sandwich, which I love. Then I get the ropa vieja with rice and pigeon peas. The ropa vieja is shredded flank steak with peppers and onions in a tomato-based sauce. To drink, I get a Morir Sonando, which translates to ‘to die dreaming.’ It is a traditional drink of the Caribbean but especially in the Dominican Republic. All recipes vary for this. but it usually consists of orange juice, sweetened condensed milk, and sometimes evaporated milk. I could drink these every day. Whenever one of my sous chefs or co-workers asks me for a place to eat that they haven't heard about, I always send them to El Oriental de Cuba."

El Oriental de Cuba opened in 1994. In a 2006 Boston Globe review, Devra First visited the restaurant once it reopened after being firebombed, finding that it "look[ed] better than ever...but mostly things are the same: It's still El Oriental. The staff is still friendly in an efficient, I've-got-a-job-to-do way. The new ropa vieja looks just like the old ropa vieja. And the fact that things taste the same now somehow makes them taste better." (She also noted that "hipsters and homeboys" were there drinking tropical shakes. Is this the first instance of the word "hipster" appearing in the Globe?) "It's a meal worth waiting more than a year for, not to mention 40 minutes standing by the door," she wrote. "Welcome back from the ashes, El Oriental."