Share All sharing options for: Kathy Sidell Recalls Stella's in the North End 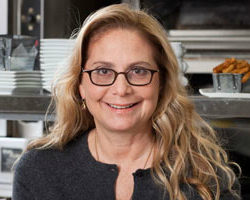 "Stella's in the North End was my dad's very favorite restaurant in Boston," writes Kathy Sidell, owner of the Met Restaurant Group. "We would often walk in the summertime from his boat, which he kept at Lewis Wharf for a stretch, into the North End, following the waft of garlic frying to the small corner door of the place. It was always cramped and packed inside, impossible to get in. It was Boston's answer to Rao's. It was old-school. Waiters who spoke Italian. Caesar table-side and flambéed shrimp scampi. It felt like those timeless Italian restaurants still do in NYC — Il Mulino, Nanni's, or Il Tinello. Places where the captains care for your table and anticipate your every need! And where the food tastes as if you were in a back street in Rome. It was the real deal for me."

Stella's opened in 1925 at 9 Fleet Street in the North End, moving to 74 East India Street in 1979 before ultimately closing in 1983. It was "a mecca for all categories of Who's Who in America," according to the 2012 obituary for Lillian Polcari, the last surviving member of the founding family of the restaurant. "Celebrities of all social, educational, clerical, political and infamous backgrounds were hosted there and enjoyed the finest in Italian dining with impeccable presentations and courtesies."

According to Boston: Dining Out, a 1972 booklet by Cynthia and Jerome Rubin, Stella's was "popular and fashionable" and served "excellent Italian cuisine." Specialties included honeycomb tripe with marinara and veal scaloppine alla marsala. From the same booklet, here's a peek at Stella's menu from that year: