From Hojoko to MAST', Rosebud to American Fresh Taproom, these are some of fall 2014's most exciting restaurant openings.

The weather's getting cooler, but the restaurant scene is staying hot with a big crop of openings slated for the coming months. Here's what's currently known about the most anticipated restaurants that are opening up soon. Be sure to keep an eye on this page for updates in the next few weeks, and hit up the tipline with any intel of your own.

[Image: Official Site]
What: This adjacent duo will be located in the new Broad Institute building in Kendall Square. Study will serve three meals a day in an "academic" ambiance, while the deli will offer "inventive sandwiches" and cocktails.
Where: 73-75 Ames Street, Cambridge
Who: The team behind Journeyman and Backbar
When: October


[Photo: Facebook]
What: The beloved bagel pop-up from Cutty's in Brookline gets its own space in Porter Square. (Eater readers previously voted Bagelsaurus the best bagels in Boston.)
Where: 1796 Massachusetts Avenue, Cambridge
Who: Bagel-maker extraordinaire Mary Tiny Hyatt
When: October

"I will have only one restaurant here, so there will be everything about Bar Boulud New York, but it will also be about what fits well here. How do we feel here in Boston cooking versus New York? Not that we are too far away, but still there is a lot of DNA of the food scene and also the supply here. You almost feel closer to the coast. I mean, a lot of fish comes from New England, and so it's obvious that New York is fed in part by New England. So I think we'll have a strong focus on that...

And of course the charcuterie program will be an important part. The wine program is about French wine, with the core from Burgundy and Rhône, so chardonnay, pinot noir, hermitage, syrah, mourvèdre, Châteauneuf-style. It'll be French-American in a way, and international, but with a French core. Of course the menu will be seasonal besides some of the classic dishes; seasonality — meaning local ingredients — has been the driving force of all my restaurants forever. Being born and raised on the farm, I always think that way."

Where: 776 Boylston Street, Boston
Who: Boulud and Aaron Chambers as chef de cuisine. (Read his interview with Eater about the project here.)
When: September 16

[Image: Facebook]
What: A sibling to Bergamot (in fact, the name stands for "Bergamot Inman Square,") it'll serve "eclectic small plates" and "innovative charcuterie," according to a release. The 49-seat restaurant will have two bars, one looking into the kitchen. Design features include a wine chandelier. Potential menu items may pop up on the Bergamot menu for testing over the next few months. Wine director Kai Gagnon shared the following thoughts with Eater:

"I'm thrilled to have a forum for wine like BISq: great food in a convivial, even Rabelaisian, atmosphere. We're shooting for the raucous, yet inviting feeling of a Parisian bar à vin with the quality of food that that at Bergamot would lead you to expect. The experience will be highly informed by the wine we will offer: a large selection in multiple formats from all over Northern France (Loire, Champagne, Jura, Savoie, Burgundy, and Beaujolais), Germany, and Austria. The wine list will change frequently (almost daily, to a degree) so that every visit will present a different landscape. Guests will experience the same attention to detail in service and wine presentation that you'd expect from Bergamot but in an informal atmosphere. Our goal is to approach and present wine in the most lighthearted, purely passionate way possible but with all of the expertise and savoir-faire you'd expect from one of the best wine programs in the country. I am so excited to share the wine I love and the passion I have for it with everyone that walks in the door--whether you're getting a glass or two or one of the bottles we've been cellaring for four years."


[Photo: The Gallows/Cal Bingham]
What: A South End doughnut shop from the team behind The Gallows, who are also going to be opening a new restaurant in the soon-to-be-former Hamersley's Bistro space. They frequently experiment with donuts at brunch at The Gallows and even offer a donut breakfast sandwich: a Sriracha doughnut bun, orange coriander breakfast sausage, caramelized onions, American cheese, and a sunny egg.
Where: 492 Tremont Street, Boston
Who: The Gallows team
When: Late Fall

[Photo: Twitter]
What: A beer garden, wood-fired pizzas, and more in a former dry cleaning shop in Charlestown's Hayes Square. Expect 24 beers on tap, particularly Belgians and locals, as well as a reserve list of fancy bottles.
Where: 5-7 Moulton Street, Charlestown
Who: John Paine (Sorriso, Les Zygomates) and Michael Cooney (The Publick House)
When: Shooting for October, according to Cooney.

[Image: Provided]
What: A French bakery in the former Amsterdam Cafe space in the South End, serving "quality baked goods made from scratch by classically trained chefs at neighborhood prices." Also, light lunches. Here's the menu. The small space will seat six at a counter, and there will possibly be a patio at some point.
Where: 517 Columbus Avenue
Who: Chef/owner Frederic Robert, a James Beard Award winner who was in business partnership with renowned restaurateur Alain Ducasse for many years. Hana Quon, Robert's sous chef from PB Boulangerie & Bistro in Wellfleet, will be pastry chef.
When: Any day now. UPDATE: Opened on Monday, August 25.

[Photo: Facebook]
What: This Jamaica Plain standby closed recently, but it will reopen this fall, renovated and under new ownership by the Tres Gatos team. "We will continue Felicia's tradition of sourcing as much produce, meat and fish as locally as possible," they promised on Facebook. The popular weekend brunch will remain largely the same (and some items are currently on the menu at Tres Gatos), but the restaurant will have a brand new Italian lunch and dinner menu, featuring pasta made in-house.
Where: Assembly Row, Somerville
Who: Owned by Tres Gatos proprietors David Doyle and Mari Perez-Alers as well as wine director Keith Harmon. Rialto alum Brian Rae is executive chef.
When: Fall


[Photo: Facebook]
What: An ice cream shop in the former Sherman Market space. Prepare for sundaes, frappes, and more. It's named for co-owner Aaron Cohen's young daughter.
Where: 22 Union Square, Somerville
Who: Aaron Cohen of Eat Boston and Ben Dryer of the now-closed Sherman Cafe and Sherman Market
When: Early to Mid-October

[Rendering: Facebook]
What: The old Fenway HoJo's has become a fancy new hotel called The Verb, and O Ya's Tim and Nancy Cushman will open Hojoko there this fall. It'll be a "fun, high-energy izakaya."
Where: 1271 Boylston Street, Boston
Who: The Cushmans
When: Fall


[Image: Facebook]
What: The nearly 60-year-old Saugus donut shop Kane's Donuts is expanding to Boston's Financial District (and lengthening its name). Donuts for the new shop will be rolled, cut, and baked in Saugus but filled and garnished to order in Boston. Expect classic flavors like lemon-filled and Boston cream as well as some new specials available only in the Boston location. This will be the first of a few expansions over the next couple of years.
Where: One International Place, Boston
Who: The Delios family
When: Mid-November


[Photo, from left: Marco Caputo, Anthony DePinto, John DeSimone, and Nicholas Garoufalis/Rachel Leah Blumenthal]
What: Southern Italian cuisine, including Neapolitan pizza, in a vast Downtown Crossing space with a lounge, bottle lockers, and more. "We bring some New World and some Old World together; we try to combine everything," co-owner Marco Caputo told Eater previously. "I bring old-fashioned dishes from my mom, I bring some old-fashioned street food that I used to eat when I was a kid in the streets of Napoli. We try to combine this with the new future."
Where: 45 Province Street, Boston
Who: Co-owners John DeSimone, Anthony DePinto, and Marco Caputo; general manager Nicholas Garoufalis; chef Celio Pereira (an alum of Mamma Maria in the North End).
When: Late September. A rep notes that the menu is ready the build-out is almost complete.

[Photo: Facebook]
What: Fresh juice, raw foods, and vegan snacks in a former bubble tea shop in Kendall Square. Mother Juice started out as a food (well, juice) truck.
Where: 625 West Kendall Street, Cambridge
Who: Ellen Fitzgerald and Laura Baldini
When: Aiming for September 2, according to a rep.


[Photo: Facebook]
What: A bar and restaurant with a sprawling patio (with fire pits) and a "small" menu of "thoughtfully prepared, seasonally influenced foods." Think chorizo Scotch quail eggs.
Where: Assembly Row, Somerville
Who: This is the sixth Somerville project for Ken Kelly, who also owns Brass Union, Foundry on Elm, Saloon, and more. Patrick Gilmartin, of the defunct but beloved Staff Meal food truck, is heading up the culinary program, and Jess Willis is in charge of beverages.
When: Mid-October

[Photo: Facebook]
What: "Honest food" and "honest drink" in the historic Rosebud space in Somerville's Davis Square. "Folks can expect regional, homestyle comfort food from across the U.S.," partner and chef John Delpha told the DIG. "Our goal is to become part of the fabric of the neighborhood as a simple, laid-back, yet lively [dining] experience for all." At a recent event, the team served hickory-smoked ham sliders with barbecue onions and kimchi mayo.
Where: 381 Summer Street, Somerville
Who: In addition to Delpha, Ian Strickland (The Beehive, The Merchant) has signed on as head bartender. Joe Cassinelli's Alpine Restaurant Group, which also includes Posto and the Painted Burro, is behind the project.
When: Late summer

[Rendering: American Fresh Taproom/Provided]
What: The makers of Slumbrew have two big projects in the works. American Fresh Taproom, a seasonal 60-seat beer garden, is slated to open soon in Assembly Row. It'll offer snacks, charcuterie, and sandwiches, probably through late October. The company is also building their own brewery in Somerville (they've been working out of Mercury Brewing Company in Ipswich.) It's located in Boynton Yards (near Union Square) and will also feature a taproom, with "nothing that's good for you" on the menu — think cheddar beer soup and a "deconstructed" Fluffernutter.
Where: 100 Foley Street, Somerville (Assembly Row) and 15 Ward Street, Somerville (Boynton Yards)
Who: Somerville Brewing Company, founded by Caitlin Jewell and Jeff Leiter
When: Shooting for September 1 (Assembly Row) and late 2014 (Boynton Yards) 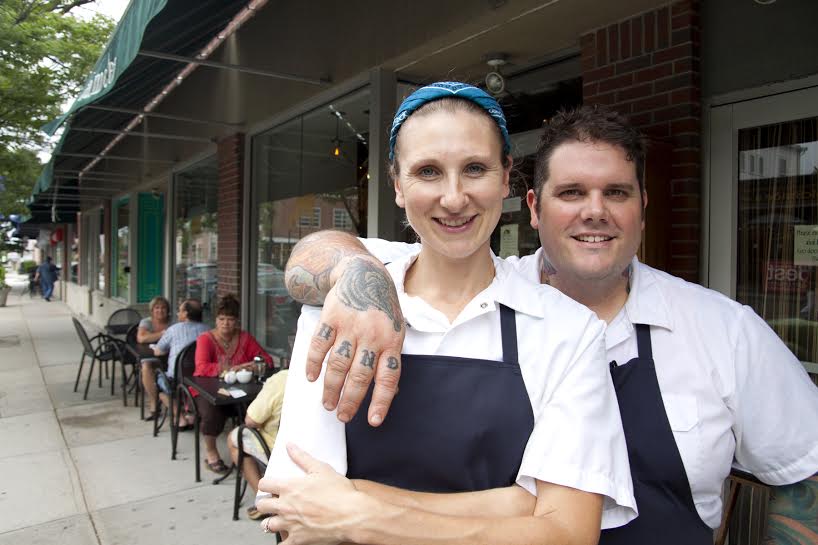 [Photo: Kate and Matt Jennings/Provided]
What: Boston natives Matt and Kate Jennings are coming home from Providence, where they just closed their decade-old restaurant, Farmstead, Inc., to open Townsman in the new Radian building on the Greenway. While they haven't revealed much yet, they're known for a commitment to local sourcing and artisanal goods, and Matt is a three-time champion of COCHON555's Boston competition, so it may be fair to expect creative pork dishes and thoughtful New England cuisine. The space is 4,500 square feet.
Where: 120 Kingston Street, Boston
Who: Aside from the Jennings, Brian Young (Post 390) is also onboard.
When: Late 2014

[Photo: Serafina on Broadway in New York City/Official Site]
What: An international chain serving Northern Italian food is making its first foray into Boston, taking over the former Radius space in the Financial District. It's poised to be the start of a larger New England expansion.
Where: 10 High Street, Boston
Who: Seth Greenberg (Mistral, Bastille Kitchen, etc.)
When: Fall


[Image: Official Site]
What: A "green-driven, Mediterranean-inspired" restaurant in the former Rendezvous space in Central Square. Expect grilled pizzas, homemade pastas, and more.
Where: 502 Massachusetts Avenue, Cambridge
Who: Greg Reeves and Mark Young, both alums of nearby Green Street, are co-owners. Patrick Gaggiano, most recently at Fairsted Kitchen, La Brasa, and Brick & Mortar, will be running the bar.
When: Mid-October
Foursquare