You Say These Are Boston's Best Bagels

Share All sharing options for: You Say These Are Boston's Best Bagels

On Tuesday, we asked you to tell us where Boston's best bagels can be found. 819 votes later, there are a few clear favorites — as well as a depressing 146 votes (18%) for the option "There are no good bagels in Boston." For those who believe that Boston bagel dreams can come true, here's where you should be going, according to Eater Boston readers.

The straight-up winner of the poll, Bagelsaurus snagged 218 votes (27%) and plenty of social media buzz. This adorably-named source of bagels is not an actual venue but rather a pop-up (or a "micro-bagel-bakery," as owner Mary Ting Hyatt describes it on her website) within Cutty's, a popular sandwich shop in Brookline. Bagelsaurus appears every Friday and Saturday from 8 a.m. until there are no more bagels left. The style, as Hyatt writes on her website, is "distinctly chewy, with a crackly exterior, yet lighter than both New York and Montreal styles." They're hand-shaped, boiled, and baked. Available varieties include everything, poppy, black olive, pretzel, and more. 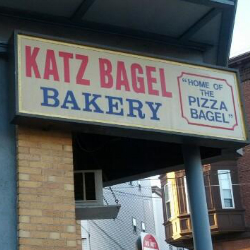 This Chelsea bakery was the most popular write-in option by far, and we know now that it should have been included in the original poll thanks to your emails and comments. Open since 1938, Katz is still owned and operated by the Katz family, who lay claim to (a) inventing the pizza bagel in the 1970s and (b) introducing true bagels to China by teaching the person who opened the first bagel factory in Beijing. "Holds its own against at least 95% of NYC places," writes one Eater reader.

Other popular choices included Kupel's Bakery in Brookline, Bagel Rising in Allston, and Rosenfeld Bagel Company in Newton, each of which earned between 11% and 13% of total votes. Now, go forth and eat bagels.
· All Eater Polls [~EBOS~]