Lulu's Allston is on the verge of opening in the former Cafe Brazil space on Cambridge Street, offering comfort food served until 1 a.m. nightly, an IPA-heavy draft list, cocktails that make creative use of cordials, and a welcoming atmosphere that mixes old design elements like salvaged shutters with modern-looking chairs and Warholesque art. Keep an eye out for the start of weekend brunch — hello, "hair of the dog" pancakes (with bloody mary butter) and bananas foster French toast.

The executive chef is Oklahoma native Sarah Wade, who has worked in North Carolina, Houston, and most recently, Greenwich, Connecticut, at a Hyatt. She was ready for a bigger city, and thanks to a Craigslist ad, she landed here in Boston six months ago to join the Lulu's team. Sitting in the nearly-finished space, she chatted with Eater about her menu and more. 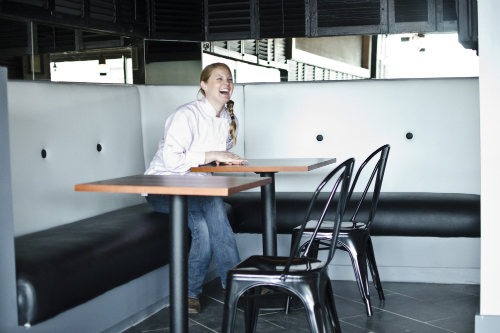 You've been here in Boston six months now. What do you think of it?
Love it, love it, love it. Wouldn't trade it for the world. Definitely fun.

Have you had a chance to eat around this neighborhood much yet? Any favorite spots?
A little bit, yeah. Azama around the corner is awesome. Camino Real is great. And Deep Ellum — the chef does a really nice job down there. There are some good restaurants around here.

Tell me about your menu. What's the inspiration behind some of the dishes?
Overall, it's a creative twist on comfort foods. Definitely a very approachable menu, but I like to take things like the Frito chili pie and throw the wild game in there. People may order it because it's recognizable, the Frito chili pie part, but maybe they've never had game, so that's how I like to put menus together. I like to teach people a little bit; it's fun.

Aside from just getting the doors open, what are you most excited about?
Putting my menu out there and seeing how it's received by the neighborhood. I worked in the hotel business for ten years, where you put a menu out, but it's never fully you. This menu is definitely me. It's mine, and it screams whatever food personality I have. It's out there. So I'm really excited to see if what we think is good food is what the neighborhood thinks is good food. It's nice to be able to cook and be able to put love into it again. This place is much smaller than most of the [hotel restaurants] that I've been in, so if anything, I'm excited for the ability to be creative and not have to do the daily grind. It's not going to be the daily grind.

How often will you change up the menu?
The plan right now is that I get to adjust it whenever I want. I'll definitely base changes on the season, the great products the vendors bring in, and what the neighborhood says. And if I have a great idea in the middle of the night and want to change up something slightly, I can do that.

Is there one specific dish you'd call your favorite or you think people will like best?
I think they're all my favorites! They're all little bits and pieces of my travels and the chefs that I've worked with. I think the short rib mac & cheese is going to be a winner. I had a good proper Southern woman teach me how to make really good mac & cheese when I was in North Carolina. Obviously people have different opinions of the way mac & cheese is supposed to be — is it creamy, is it baked, is it dry? — but when it's that right mix of cheese and butter and cream, and we mix in the nice short ribs that have been braised, I think it's going to be killer. And I'll laugh when something completely different is what's popular on the menu, because that's always how it happens.
· All coverage of Lulu's Allston on Eater [~EBOS~]