Share All sharing options for: Scissors & Pie: Look Inside the New Roman-Style Pizzeria

The room glows a bright golden shade as the light bounces off of the light bamboo finishes. More bamboo forms exposed beams, and coupled with concrete, it gives this lower-level restaurant a modern feel. And that same bamboo can be found again in customizable tables that are attached to a runner on the floor, allowing tables to move freely and easily, making additional seating for larger parties a snap. 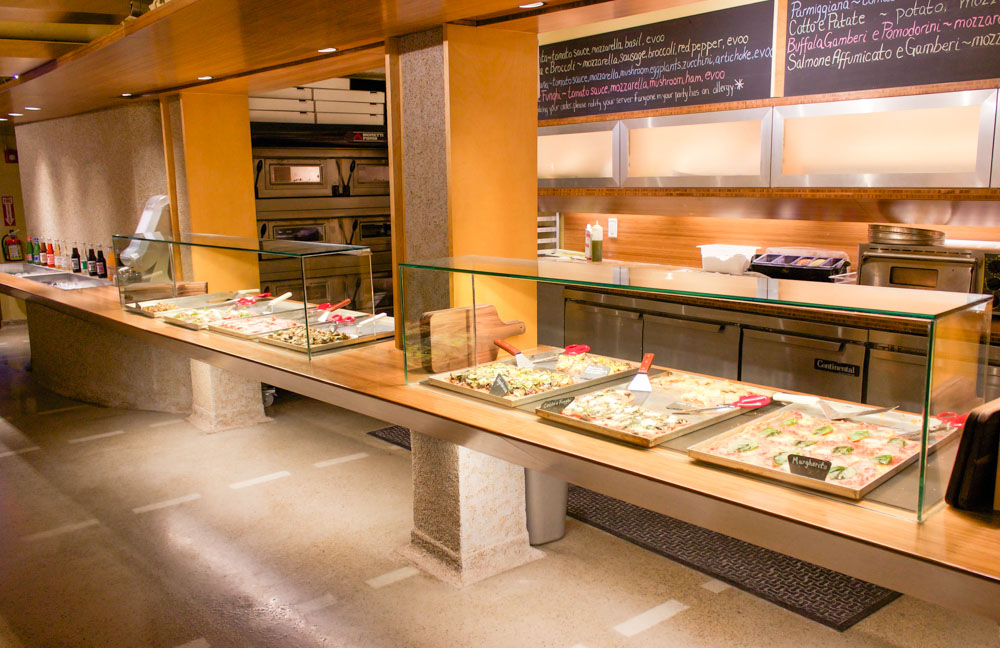 The real attraction, however, is not in the atmosphere but rather what's in the thick glass cases that line the right side of the wall. Protected and on display like precious jewels are large sheet pans displaying a variety of pizzas. A newcomer on Newbury Street, Scissors & Pie sets out with a mission to right the injustice of crappy pizza everywhere and return Italian pizza to something deserving respect and made with pride. They do this in traditional Roman fashion, with scissors, and they measure their success in ounces rather than slices. 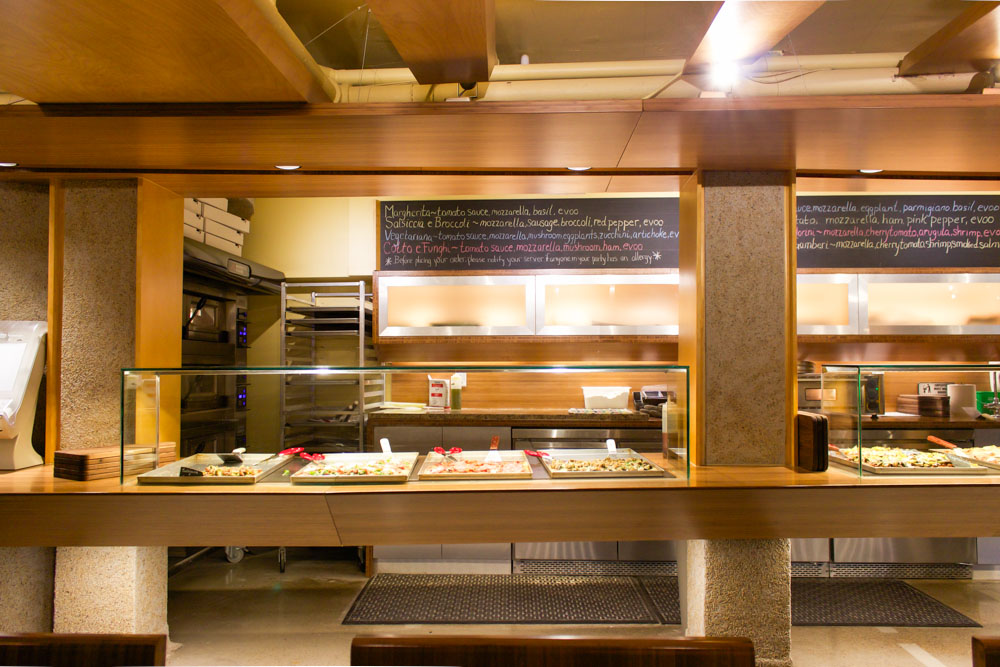 "We had already settled on this space," explains DeRosa. "This used to be a pizzeria, and it has been since the 1960s. As things started to develop, we wanted a communal feel, and that's why our tables are on tracks. You can make a four-top or a six-top or as many combinations as you want. The space is low, and we still have some things to do, like putting up images of our different ingredients." DeRosa also owns Mitchell John Salon in the Financial District and is one of the founding members of the popular and locally-founded Living Proof haircare line. 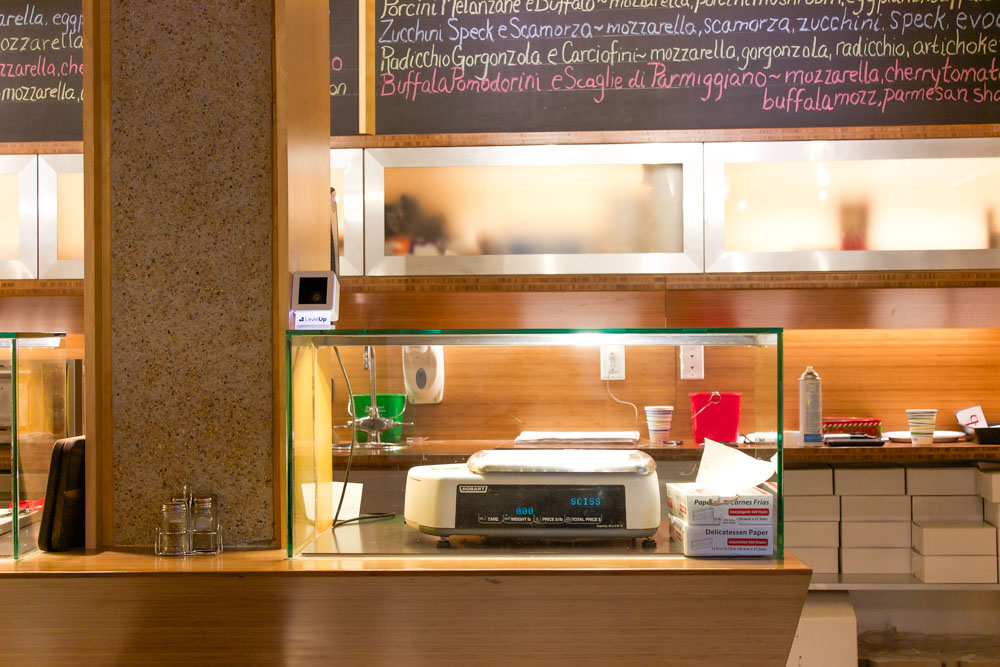 "The pizza is very light and has an airy crust," points out their Roman-born pizza chef — or pizzaiolo. "It's a 72-hour process, and that allows the dough to be so light. That's why you don't feel heavy after you eat it." The dough itself is made from a special blend of flours; the exact mix is kept secret. The offerings range from traditional, such as the Margherita, to their most popular, the Cotto e Patate, which is a combination of fresh mozzarella, prosciutto cotto imported from Italy, thinly sliced potatoes, pink peppercorn, and a house-made, thyme-and-rosemary-infused oil. 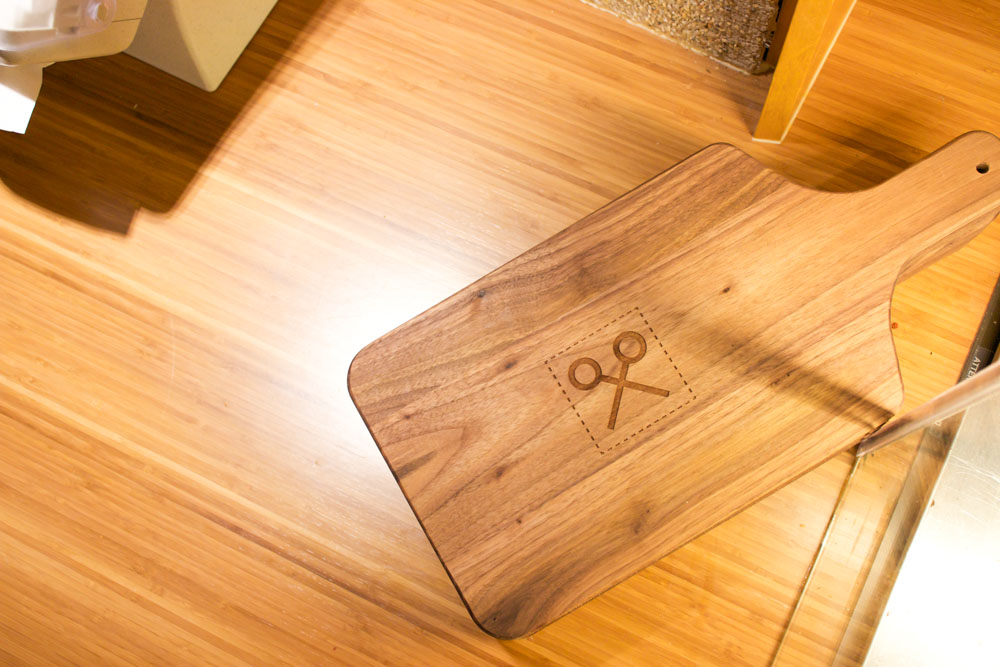 DeRosa says that they've had to educate customers on their ordering system a bit at the beginning but that people are catching on. Once ordered, the pizza is then cut to specifications with large scissors and weighed, just as the Europeans do. The pizza is then presented on a thick cutting board with a scissors logo on it. He and his wife had fallen in love with not only the quality of pizza abroad but with this ordering system. "It's just not something that's really been done in the States, and we're excited to bring this here", DeRosa says. 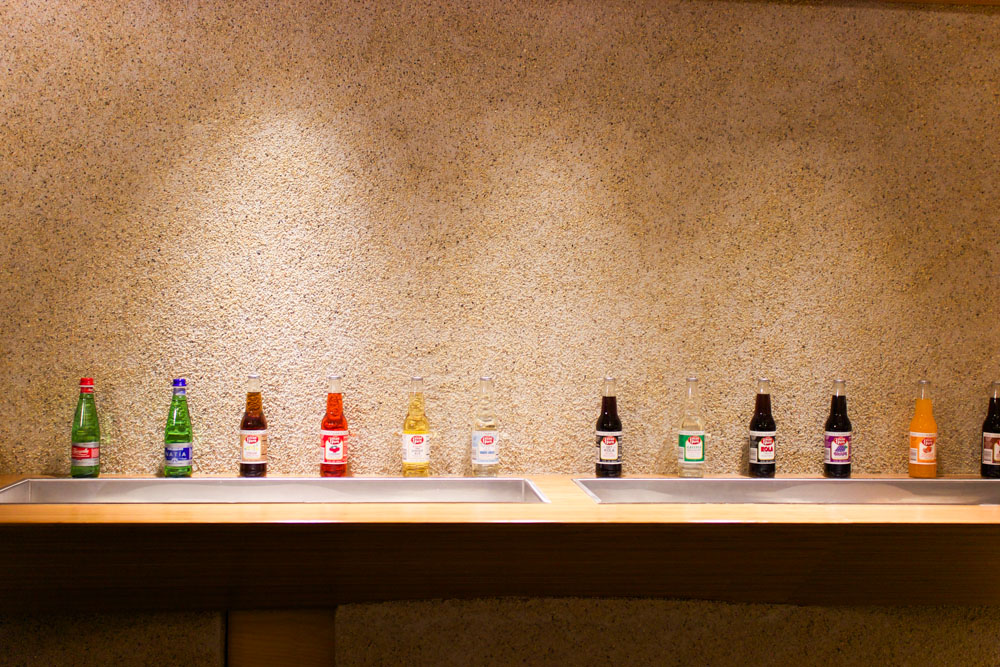 · All coverage of Scissors & Pie on Eater [~EBOS~]