Lennie Timpone on a Lifetime at Santarpio's

Share All sharing options for: Lennie Timpone on a Lifetime at Santarpio's

Welcome to a special Pizza Week edition of Lifers, a feature in which Eater interviews the men and women who have worked in the restaurant and bar industry for the better part of their lives, sharing their stories and more. 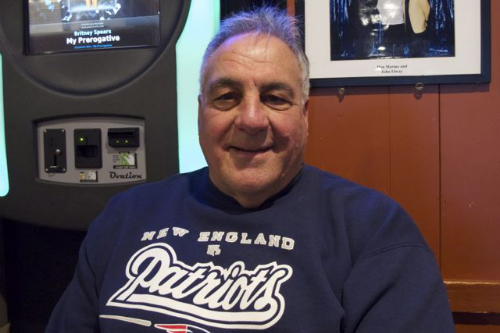 A fixture in East Boston and part of a tradition for most airport travelers, longtime pizza restaurant Santarpio's has always been, and still is, family-owned and operated. Known for their minimalistic decor, their barbecued lamb and sausage, and of course, their pizza, they expanded to Peabody a couple years back. Eater chatted with Lennie Timpone, a Santarpio on his mother's side, who has worked at the East Boston location all his life.

Tell me about yourself and your connection to Santarpio's.
Okay, I'm third generation; my mother's last name is Santarpio. The fourth generation is the owner now — two brothers and two sisters — and the fifth generation is also working for us in the Peabody location. We started back when my grandfather and his two brothers came over from Italy, the Naples area, and they were chefs for a prince, so says my mother.

Well, when they got to this country, they couldn't speak English, but they had to do something, and since they could bake, they decided to do that. They made bread and started out on Cottage Street, which is about four streets over from here. Then they opened this location. We had this gigantic brick oven, and that's how it started. They made bread. They didn't make pastry, but they made pizzas and sold them. After Prohibition, they still had the bakery, and then they bought this building and moved the operation over here to our current location. The only reason why we continue to do it is because the next generation continues to take over. That's basically it. I don't know what else to tell you.

So has the recipe changed since then?
No.

Has anything changed?
Well, the product. The product has changed because of cost. For instance, to get mozzarella like the old days when I was a boy, it used to be full cream, but they don't make full cream cheese any more. If they did, I can't imagine how much it would cost, because now you're talking milk and skim milk, and everyone's health-conscientious, and remember, we're trying to keep the cost down and competitive, keep it cheaper than most places for everyone. We don't want to gouge anyone, and we never did. This used to be just a plain neighborhood area.

How has the neighborhood changed?
Well, the neighborhood has ceased to exist and has ethnically changed. I'm sure when my grandfather came here, this must have been predominantly Irish and Jewish, and as Italians moved in, everyone else started moving to suburbia. When we moved to suburbia, the Spanish and Portuguese have sort of taken over, and that's how it works. But we're still here. There's about four Italian places left in East Boston, if they're even still owned by the original owners. I know that Jeveli's is and we are. I don't know about the other places, whether they got bought out by someone else and just kept the Italian names, I don't know. Other than that, that's it.

What has the neighborhood changing meant for you?
Well, tourism. Word of mouth, and people in suburbia keep coming back. Not as much — I mean, it's difficult to get here. When you move to suburbia and have children, you're not going to come here.

We still will.
Nah, you'll send out for pizza. It's a convenience thing, and you'd save money on fuel. We all try to do that, but with the TW tunnel, people in Dorchester and Southie can get here quicker. Right through the tunnel. So you've got more people coming from that area because you can get here quickly. The people from Revere, Chelsea, and Winthrop will still come, and with the new hotels by the airport, we'll still get people because they could just walk here, even.

Do you get a lot of tourists? Has the number changed?
Oh yeah, we get a lot of tourists. People from different parts of the country, and they'll tell you, too. People at the airport ask where they can go locally, and they send them right here. I mean, I'm sure they tell them other places, too, but in terms of walking distance, we're first. That's it.

Besides having to tweak the product a bit to keep up with cost, what else have you had to do to keep up with the times?
To keep up with the times? Well, this establishment hasn't changed at all. Except for this [points to an ATM machine]. Everything here is still cash. No credit cards, and people use this machine. In the Peabody location, it's all computerized. I'm up there Mondays and Tuesdays. I put my code in there, and I just hope the computer does the rest for me. Other than that, nothing has changed.

But I'm a dinosaur and I don't belong there; I belong here. We still make our own dough and sausages and cut our own lamb. Nothing has changed. We do it both here and in Peabody. If this generation wants to grow more, they'd need to do things in a more centrally located kitchen where they have other people do all the work. I still do it all, and we do it ourselves. I've been here 47 years, and I've been doing the same thing. I'm back making sausages and cutting lamb. I don't do as much as years ago, but I'm still doing it. We still exist in modern times because we have a good product; we try to keep it basic, and we use good ingredients. I don't know that we could do that if we had 9 or 10 places. I really don't know. Like, how does Legal Sea Foods do it? When they started, it was one place and now they have, what, 40?

What about a certain local chain that also has been serving pizza for about as long as you have? Is there a friendly competition? Not friendly?
Who? Oh, Regina's. I think there's not really a rivalry. They are as old as us, basically. That was the magazines that created this concept of rivalry because we're two of the oldest, still making pizza. I mean, it's different now. Nobody wants to be in this business any more. It's seven days a week and nights and holidays. My life is here. That's just how it works, okay? To keep a place like this going and in the family, it takes dedication.

Any particularly good memories that you could share?
Yeah, there's a lot of memories. We've had celebrities in here. Frank Sinatra came in here, way back in the 40s, my mother said. When he was chasing Ava Gardner and going to Africa from here, he stopped in and left a bracelet on the bar. You know, memories like that. The Bruins and Red Sox would come in on their way to the airport. Stuff like that.
· All coverage of Santarpio's on Eater [~EBOS~]
· All coverage of Pizza Week on Eater [~EBOS~]