A Diary of a Saturday Night at Pinocchio's

Share All sharing options for: A Diary of a Saturday Night at Pinocchio's

In honor of Pizza Week, we sent Eater Boston contributing writer Gabe Bellegard Bastos to spend last Saturday evening (his birthday, nonetheless) sitting at notorious late-night pizza joint Pinocchio's and writing down everything that happened. Here's what he saw, heard, and ate. 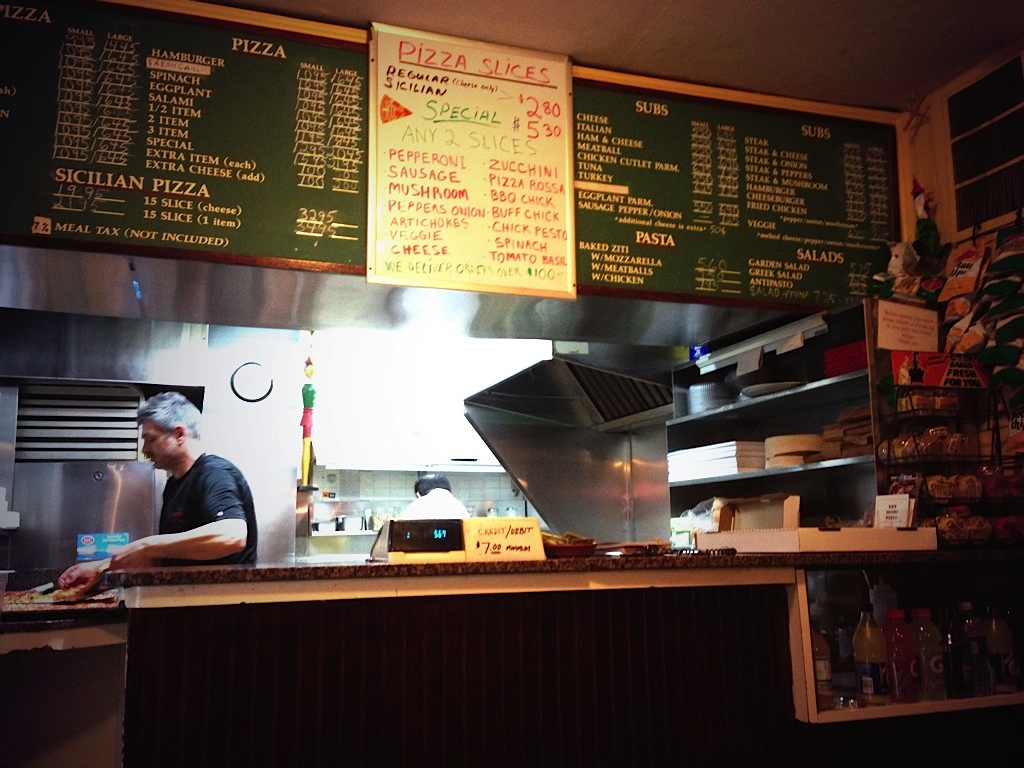 Pizza can be a chef-driven, highly technical endeavor. But when it's past dinnertime, around a college, and "adult beverages" have been consumed, that's not really what sells. Thick, bready, cheesy, Sicilian-style slices are much more desirable. Reporting from the table by the counter at Pinocchio's Pizza, a Harvard Square pizzeria, here's what those later hours are like on a Saturday night.

8:00 I walk into some commotion over seating. A party of six girls, maybe college-aged? Perhaps a little younger? Only five-tops are available, and phone-charging is a major concern.

8:07 Very young couple deliberates orders as if it were the most important decision of their lives. Judging by their age, it might be. Maybe it's a first date? You can't screw up your pizza game on your first date. Small tomato basil pizza is ordered, so at least they handled it well. At least it wasn't some godlessness like eggplant pizza. Nothing against eggplant, but really, what sort of disturbed young couple gets a small eggplant pizza. One of my chairs gets taken. Now I am the weirdo behind a laptop with three chairs, no pizza, on a four-top. Nothing to see here, folks!

8:12 The dining room is crowded but calm. A significant portion of the "local college" students might be gone for the spring break, which would explain why the average age is slightly below college-age right now. Let's see how that changes as the night gets drunker. Another diner brought homework and sits across the dining room. I wish I could be in a position to judge that decision.

8:16 Slices are offered; writer politely refuses it. For now. The night is young.

8:21 I spot a Pinocchio doll deep in the kitchen. It frightens me. I swear it's looking straight at me.

8:26 "The olds" decide to join the party. Definitely the most incompetent customers so far. "Slices are here," points Jerry, the evening manager. The debate between slices (quick) and whole pizza (fresh) proves to be an extensive and problematic one. It's a little bit of a family drama. I get the feeling it's a couple in their 40s and the woman's parents. Root beers all around. The guy definitely wants Sicilian slices; dad definitely does not approve of his life decisions. Should be a fun dinner.

8:27 I found it refreshing when someone came in with a straightforward game plan and, without wasting a second, ordered a slice of sausage. Well, turns out he left his cash at home and there's a seven dollar minimum charge, so that's not gonna work either.

8:36 I just noticed that they offer multiple flavors of "sports drinks." Smart move, Pinocchio's. You know better than anyone what goes on here. Also, if I don't see a single person ordering that, this whole thing was pointless.

8:40 Owner of Pinocchio's DMs me on Twitter: "Don't let the freaky 'no armed' Pinocchio alarm you." WHAT? I HADN'T EVEN NOTICED HE HAS NO ARMS. WHY WOULD YOU DRAW ATTENTION TO THAT? 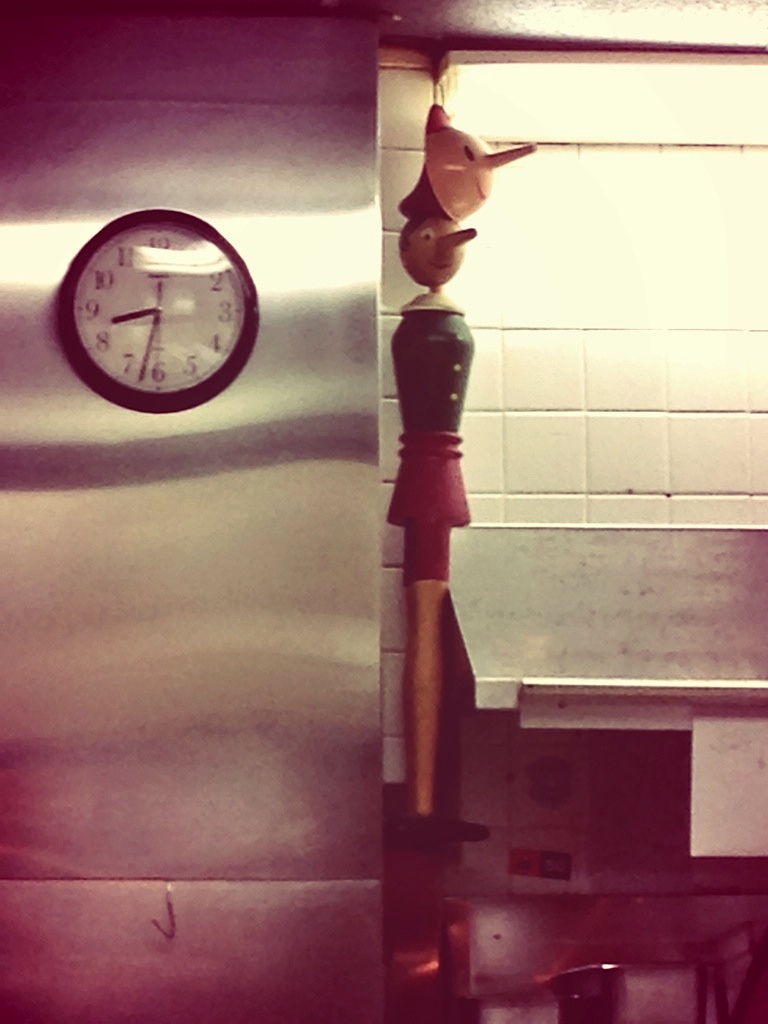 8:43 Dining room is completely empty except for the olds. I blame armless Pinocchio.

8:45 Dude comes in hot, ordering exclusively in Italian. Kitchen staff and manager are completely unfazed. I understand the emptiness of "I am Italian, so I know all about Italian food" statements, but that's gotta count for something, I guess.

8:47 Italian-ordering customer lingers. I don't get the sense he knew the manager beforehand, but they seem to get along just fine. Many American universities are named.

8:49 Buffalo slice, not heated up. There's a lot there I can't access. Seeing he's the most polite customer so far (not much of a competition), and I am so puzzled by it all, I kind of want to be friends with him. He leaves too quickly. All that could have been.

8:52 There's a picture of Mark Zuckerberg face-fucking a slice right across from me. A little informative thing about "Facebook fridays at Pinocchio's in honor of one of Pinocchio's favorite patrons. A weekly after-lunch discussion group on society, computers and the internet." That's an event that also needs to be live-blogged, I think.

8:57 Extremely helpful friend stops by with much needed coffee. It's a little chilly in here and a little foggy in my heady. Maybe snark levels will go down.

9:09 "I was teaching fifth graders down the street a couple days ago, and I asked if they knew about Pinocchio's pizza. One of them replied, 'He's a good guy but lies too much.'" Forced laughs mandatory. #coolstorybro

9:12 Want some pizza with your chili pepper flakes?

9:20 First sub of the night is ordered. Hesitantly.

9:26 Props to dude taking a phone order and working the flat top. There's a good chance I would end up with a spatula to my face.

9:36 Not that I am obsessed with it, but, why does an armless doll need a mask? And is the mask not on because he doesn't have arms?

9:39 Too late for people to have dinner; too early for munchies. Things are quiet.

9:50 Slices vs. whole pizza family finally left so it's just me and Twitter in the dining room right now. And armless Pinocchio.

9:58 The first customer with St. Paddy's-related apparel just walked in.

9:59 I swear someone in the kitchen is whistling "Let It Go" but if R2D2 were singing it.

10:01 I get cold pizza; trust me. I don't get room temp pizza. Anyone care to explain the "don't heat it up" request?

10:10 Someone claims they aren't eating because they had too much Chik-fil-a at lunch.

10:21 A sign behind me tells me the local college won the 1989 NCAA hockey championship. So there's that.

10:42 "I've seen a little bit of everything here. Last week there was a girl sleeping by our delivery door."

10:45 Dude is counting on three slices of pizza (tomato basil, barbecue, Buffalo) to drum up some romance with a lady waiting back at his apartment. I hope it works out for him; it's definitely an unconventional approach. Apparently last night he got them chicken wings, and they both fell asleep before romance was drummed up. I guess that yes, we all needed to know about that.

10:51 Maybe it's just that I watch too much basketball, but there does seem to be streaky ordering. For a while, it was duos coming in and ordering subs. Now we've hit single dudes in their 30s getting three slices by themselves.

10:55 "May I have an edgy cheese? Chicken pesto sounds good. Do you have ARTICHOKE right now?" Slow down.

10:57 "It looks really good with your hair." I really thought it was about pizza. It was the hat he was wearing.

11:00 If my clock couldn't tell me the fact it's getting late, the fact a couple just took four minutes to figure out where the counter is does.

11:04 When they finally figure out where the counter is, a solid amount of "for here" food gets ordered. Three large subs and a pizza. For two. At least they realize now is the best time for them to make out because you would need superpowers to feel sexy after that order.

11:13 Remember when you were in college, and your drunk friends called you Saturday night and asked what food you wanted them to deliver to you? Yeah, me neither. But I guess it's a thing that happens. The more likely scenario was for my friends to eat all the food I ordered. This does feel ever so slightly more civilized.

11:19 Still on that people do unexpected things tip: Someone clearly came in after a run and ordered two slices. You know, the famous "carbing-up after you run" approach.

11:20 So there's a three-year-old kid in here right now. She's the first person to notice me, so that's cool. But really, dad, not sure if this is the place or time. Manager asked if slices are for here or to go. Come on now.

11:24 Has any sociologist done any research on people's stance against a counter?

11:27 Editor stops by and blinds me with flash photography. Apparently eyesight is not a skill needed for this job. Or she's trying to get rid of me.

11:33 "When do I ever eat anything with chicken that's a pizza?" — Editor [Boyfriend got a slice of pepperoni and a slice of chicken pesto for us and proceeded to eat the pepperoni. No way. — Ed. note] 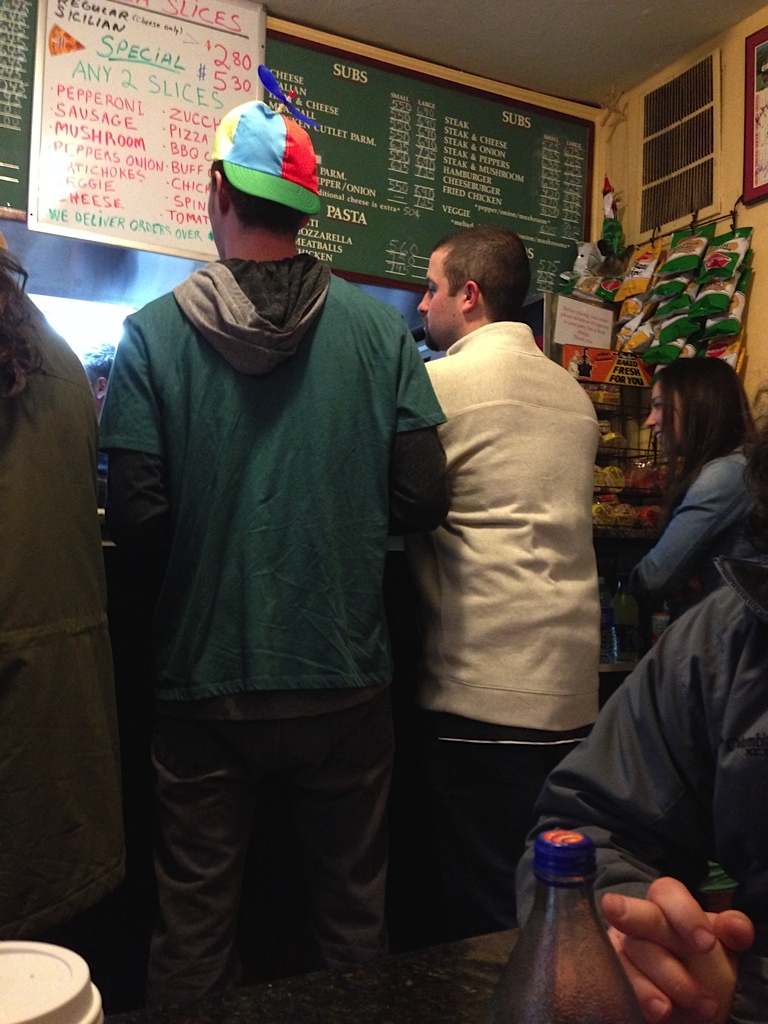 11:53 "BBQ PLEASE," screams customer from the back of the line. People are neatly lined up for fun, apparently.

11:55 Okay, so now it's pretty much as busy as it gets. So obviously, someone feels the need to lecture the manager about "service, you know. Aren't you supposed to bring it out to me?" No. [Great response from guy behind the counter: "This is fast food." Deadpan. — Ed. note]

12:07 "I'm like so unbelievably noxious right now. It must be because I've been drinking all day." That seems unreasonable.

12:12 A lot of cursing in Spanish. This place is multilingual as hell. Yet I heard "Aranciata" pronounced at least five different ways so far.

12:17 The number of left-behind trays has increased significantly in a very short amount of time. As has the number of "Where's the [nonexistent public] bathroom?" inquiries.

12:25 "I want all the pizza. [burp] On second thought: just one slice. Can we actually leave right now?"

12:26 TIL: "Why don't you just go sit down and I'll handle this?" is only ever said from relatively sober friend to relatively drunk friend.

12:28 As place gets crowded, my weird office starts to draw more attention. No one bothers to ask what the hell I am doing, though. I don't know what that says about me.

12:32 Someone just requested not one but two middle pieces. I have no words.

12:33 Local college athletes come in, explain to manager the concept behind the NCAA tournament. He's more of a soccer guy.

12:40 Radio station switches from soccer to The Police to Katy Perry's "Roar." And with that, the night comes to an end. As Katy beautifully sings it, "Stinging like a bee, I earned my stripes."