Joanne Chang on Her Current Favorites

Share All sharing options for: Joanne Chang on Her Current Favorites 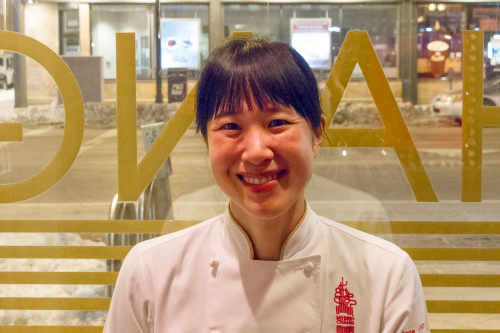 What's your current favorite dish in Boston?
We go to Sam's at Louis a lot. We are close friends with Esti [Parsons], the owner, and her husband Drew [Parsons]. And we also love Asia Mei's food; she's their chef, and she's just so talented. Every time I go there, I look at the menu and feel like I need to go back there 10 times, because I can't just pick one thing. She has the great quinoa salad that they do as an appetizer, and they rotate the ingredients that are in it seasonally. I get that a lot. She also always does great fish, and I get that a lot too.

We also just went to Ribelle, and it was awesome. I can't wait to go back. We also love Cafe Sushi. They've been around forever, and it's just really incredible. We've been about three times in the past month. Everything that we've had there has been outstanding. We also go to Picco a lot and Toro as well; we love both of those. We went to Les Zygomates recently. We live around there, and we tend to stop in there last-minute for dinner. They do great steaks and scallops, and they are slowly revamping things. I think they're really going to be incredible. We also really enjoy Giulia as well. There are just so many new and great restaurants to get to.

What's your current favorite ingredient to use?
At the bakery, we're trying to introduce more whole grains into our pastry. Right now we've been working on our current scone, which we've made since the day we opened. We're tweaking it a bit and making it with spelt and whole wheat flour to add a little more character to it. We actually just tried one version of it today that we were really happy with, so I'm excited to introduce that soon. I am also finishing up a low-sugar/no-sugar cookbook, and we're starting to introduce some things from there.

At Myers + Chang, our chef has been with us for two-and-a-half years now, and she's really gotten to know us. She's no longer sticking to what we've been doing in the past, but she's bringing her own ideas. We've also got a lot of grains on the menu too, which is not what you'd typically find at an Asian restaurant, but it's really been adding more to our menu and making it more appealing to everybody.

Where's your favorite place to go for food inspiration?
For the bakery, I get a lot of inspiration from food sections, magazines, and blogs. I feel like recently I get a lot of inspiration from Instagram. I've been doing it for a little while, but I've just recently become a little more obsessed with it. I had been doing it just because it was fun, and I never expected to get anything out of it, but I feel like recently we've been using it to get better. We've actively been seeking out other bakeries to see what they are doing, and it's just been really fun and inspiring. I also just like going to other bakeries for inspiration.

What is one of your favorite food memories?
There are two, actually. One is from my childhood. My parents were both working parents, so dinner was sometimes tough to pull together, but we would have sukiyaki — or shabu shabu, as most people know it. My mom would just have all sorts of vegetables, meats, fish balls, tofu, and all of these different kinds of sauces. It would take her a little time to put together all of the ingredients, but it was always one of my favorites. At the holidays, we would always have sukiyaki, and we'd all sit around dipping the meats and vegetables into the broth and then drinking the broth once it had been flavored with everything. It was just so collaborative and great to have everyone involved. I just have a lot of fond memories of that.

My other favorite food memory — this is more recent — Christopher [Myers] and I went to Paris on a last-minute trip. When we got there, we naturally were eating a lot of French food, lots of butter and cream. We had it all — bistro meals and upscale meals — and they were all so delicious. But at about five days in, and it happened to be New Year's Eve, I was done. I couldn't do anymore confit and cream, so I asked Christopher if we could please, please find a Chinese food restaurant. I just needed soy sauce and ginger. We found this little Chinese restaurant — and thinking back, I don't even know if it was good or not. But to me, it was great. We both just inhaled the food and really enjoyed it. That was also the night that he proposed, and I really cherish that memory.

What are your favorite dishes currently on the menu, and what are you most looking forward to doing in the near future?
At Myers + Chang, we put a quinoa dish on the menu. It has bulgogi beef and Brussels sprout leaves, and it's just like a stir-fry but with quinoa instead. It's healthy and it's spicy and I love it because it's got all of these bright, punchy flavors. I'm also really into a new dish on our menu, the lobster egg foo young. It's basically a creamy omelette made in our super hot woks — which makes it extra fluffy. We add lobster and water chestnuts and scallions, and then we pour a warm garlic ginger sauce table-side over the whole thing. It's divine.

We also have a new sous chef at M+C, Ashley, who is first-generation Filipino-American. She's been making things that she learned how to cook growing up, and we've loved introducing some of her ideas and flavors to the restaurant. For the Lunar New Year, she made lumpia, the Filipino version of spring rolls — they were tiny and crispy and thin like cigarettes, and we passed them around dim sum cart-style on the first day of the new year. We couldn't make them fast enough!

At the bakery, I'm pretty excited about the Valentine's Day cookies that we just did. We did sweetheart cookies that are both naughty and nice. The nice ones we've done since we opened, and they say things like "call me" and "true love," and they're always so fun. I don't remember who did the first naughty one, but I think it started with an "'F' me" one, and we just sort of went with it. For a while, we just let anyone write anything that they wanted, and it got to the point where people didn't even know what some of the sayings meant, so we'd have to look them up. I couldn't believe some of the things that we were putting on cookies! So now we've tried to have a little more of a guideline. It's still pretty shocking for me — just the other day, I stopped in to say hi to everyone, and we have a new baker — just this lovely girl who is so sweet and innocent — and I look at her and she's writing the foulest things on these cookies. I can't even say them out loud. It was hysterical.

What is your favorite thing to cook at home in your (limited) spare time?
Chinese food. I pretty much make a lot of what we have here at Myers + Chang. Sometimes I'll grab things from here because it's already simplified and prepped for me. I love making stir-fry. We also love just having a simple roast chicken with vegetables. But it's a rare occurrence that we're both home and I have time to cook.