Rachel and Charles Kelsey on Their Favorites

Share All sharing options for: Rachel and Charles Kelsey on Their Favorites

Welcome to Chef Faves, an Eater Boston series where local chefs share some of their current favorite dishes, ingredients, and more. Here's Rachel and Charles Kelsey, owners of Cutty's in Brookline. 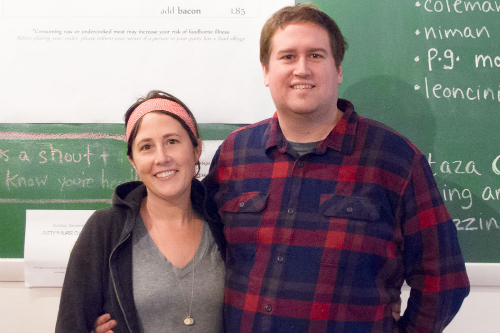 What's your current favorite dish in Boston?
Charles Kelsey: The lamb ribs at The Kirkland Tap & Trotter. I would say that's probably our favorite right now. Oh, and the swordfish chop.
Rachel Kelsey: Oh yeah, the swordfish chop. We've been there twice recently.
CK: I mean, everything that we've had there has been great, but those two things stand out for sure. We're also really excited for the opening of State Park. Oh, and we do go to Highland Kitchen pretty regularly; that's sort of our go-to.
RK: And the cake donuts at Union Square Donuts — those are out of this world!
CK: We have two young kids, so we don't usually get out all that much; instead, we opt to cook at home more.

What's your current favorite ingredient to use?
RK: Vanilla Bean. I mean, that's really not new or anything, but we use it a lot in both sweet and savory dishes. We've also been using a lot of apples lately in salads, and we made apple sauce to go with latkes.
CK: I would say beer. I mean, it's not really a cooking thing, but I drink a lot of it and do cook with it. Also, rancho gordo beans. There are also these beans from Baer's Best that are amazing. They're from Massachusetts, and we use them in our black bean soup. They have other varieties as well.

Where's your favorite place to go for food inspiration?
RK: We've been buying a lot of great books lately. We can't travel anywhere right now so we love our books. We love the Ottolenghi books.
CK: Ivan Ramen, too. Like Rachel said, we really haven't been able to go anywhere, so we read a lot of books.
RK: Although we did go to New York pretty recently, and that was awesome. We ate a lot there, and it was pretty great. We also get a lot of inspiration from going over to our friends' houses to eat. Most of them are cooks as well, so it's fun to collaborate on dinners and ideas.
CK: Yeah, lately most of our inspiration just comes from books, but I also watch pretty much every good and bad food show on TV. You know, you'll just find inspiration in the funniest places. But eating out really does it for me. For example, going to The Kirkland Tap & Trotter a couple of times just filled me with inspiration. We love seeing what other people are doing.

What is one of your favorite food memories?
RK: I have a pretty big family, and we spent a lot of time going to Martha's Vineyard in the summers when I was growing up, so I have a lot of food memories around that, with my grandparents, cousins, aunts, and uncles. I can't really say that I have one specific memory from that time, but food was just always there and such a big part of it.
CK: Mine are more from college on. I went to college at the University of Michigan, and Ann Arbor is just such a great food town. Probably one of my best food memories is a friend coming to visit, and all we did was eat, all the way until, like, 4am. We didn't even drink; we just ate. That, to me, was just a moment when I thought to myself that I wanted to do this for the rest of my life. I just love cooking, and for me it's just always been that moment that sort of snowballed. It wasn't that we had fancy or extravagant food; it was more nachos and chocolate cake, but it was the act of doing it and the camaraderie that we had that made it special.
RK: We met because of cooking. We both had worked at Cook's Illustrated, and food really brought us together. We went to Paris for our honeymoon and just walked around and ate. We did go to some of the fine dining spots, but it was more about the little carts that were along the street and the simple dishes.

What are your favorite dishes on the menu currently, and what are you most looking forward to doing in the near future?
RK: One of my favorites is not actually on the menu, but we do a roasted fruit — like right now, we have one with roasted pears, saffron, and vanilla bean, and we serve it with yogurt. Of course I love sandwiches, but I really like the fruit because it's different. When we first opened, we thought about offering people an apple with their lunch, but instead we decided to do this, just a little bit of fruit. We usually have it and put it up on the board so people know.
CK: I have a new-found love for the pork fennel. We made a change to this sandwich a couple months ago — we started dipping the meat in this rich pork stock before it goes on the sandwich. Before, the pork was room temperature, and it was fine, but I think it's just way better now hotter. And that's how things are here; nothing is ever final. We continually work on everything.
RK: I had it with cheddar the other day, and I thought that was great. We also have a lot of daily specials as well.
CK: Yeah, we will do those things. When people come in and want different things on their sandwich, we do that. It's not really a big deal. The sleeper hit for me is the ham dijon. We don't even make anything for that sandwich; it's just butter (that we add salt to), dijon, gherkins, and ham, and it's just the combination that's great. Oh, and the fork-and-knife grilled cheese sandwich.
RK: Yes! That's one of our absolute favorites. It's a grilled cheese on white with spicy mayo, and we only do this sandwich when we can get Allandale tomatoes that we shingle over the cheese with extra virgin olive oil, sea salt, and chives, and you eat it with a fork and knife. You can put bacon on it, and it's one of our favorites during tomato season.
CK: There's so much magic in that sandwich. We usually have over 100 pounds of tomatoes here during the season, and we just rotate them, pulling the perfect ones. It's got to be just right, you know. We're also doing great bagels right now; they're from Mary, the Bagelsaurus, and she has a little micro-bakery here. They're so good, they'll mess with your mind.
RK: We're doing them with cured salmon, too. She does a pretzel bagel that's awesome. We're so spoiled by her bagels, we can't eat others.

What is your favorite thing to cook at home in your (limited) spare time?
CK: Korean fried chicken wings.
RK: Yeah, we make those a lot. We also make a lot of fresh pasta when we have the time. We also like to make burgers. Our younger one eats a lot, and our older one has never really been a big eater, but he loves to go out to restaurants, and he likes to help me in the kitchen.
CK: Rachel's family is really good about sitting down to eat together. He's four and a half and really enjoys just sitting there. He doesn't want to walk around; he's just psyched to be there with the food, and that's all we can ask for.
RK: We make a lot of tacos as well; those are in our rotation. We're lucky because we both cook, so one can take a night off from the kitchen. We also go to Formaggio a lot because it's on our way home.
CK: Bolognese is also something we make a lot; it's just a great time of year for that.