Chefs' dismay over Yelpers yelping stupid things continues today with two new complaints. Over in Medfield, Brendan Pelley has taken to Instagram to aggressively defend Zebra's Bistro and Wine Bar against a one-star review by a new Yelp user, Kiki B., who was "totally embarrassed" to have been cut off after a cocktail and two glasses of wine and for some reason assumed that it had something to do with the fact that she belongs to "the LGBT community." (UPDATE: Pelley has removed the post from his social media channels and provided a statement, which has been included at the bottom of this story.)

"Yelper 'Kiki B' neglects to mention that our restaurant had to get a RESTRAINING order against her because she is clearly a mentally ill raging alcoholic that causes a major scene every time she comes near our restaurant," Pelley responds. "She doesn't mention that the police were on scene either." 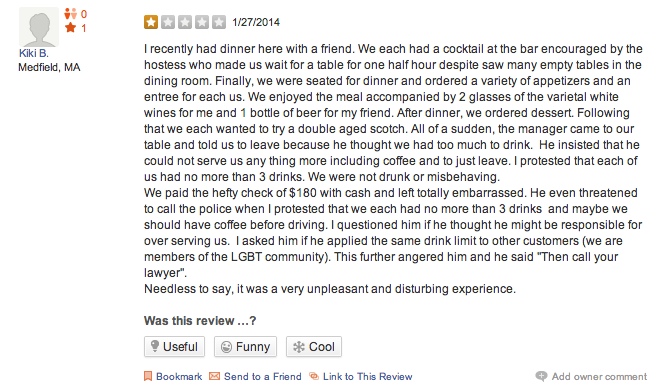 And the chef's response: 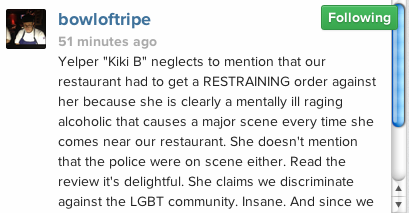 And meanwhile in Kendall Square, Nookie is frustrated that Commonwealth got hit with a two-sentence, one-star review that was originally only about an alleged typo on the menu: "If you can't spell 'banh mi' correctly, then don't bother making it. Please don't use my Vietnamese culture simply to make your menu more exotic." (At some point later, the user edited the review to add on a complaint about a "poorly executed sandwich" and "bad customer service," as well as a screenshot of another Yelp user calling her a "sad bitch" because of the review.)

In other recent Yelpers-behaving-annoyingly news, someone deemed Lincoln Tavern & Restaurant worthy of just one star thanks to its "ugly generic" pizza boxes.

UPDATE: Here's a statement on behalf of Brendan Pelley, Executive Chef at Zebra's Bistro and Wine Bar:
"I sincerely apologize for expressing my frustration with a guest's review on social media. This is by no means the way Zebra's Bistro and Wine Bar responds to guest feedback and my words do not reflect the hospitality-first philosophy of the team here."
· All coverage of Yelp Wanted on Eater [~EBOS~]