The city's critics have received both Paopao and Ribelle with open arms: Boston Magazine awarded her the title of "Boston's Best Sommelier" shortly after her arrival and before the restaurant was even open, and Ribelle is only the second restaurant to receive four stars out of a possible four from Devra First of the Boston Globe. Paopao chats with Eater about reservations, New York, communal tables, and her surprisingly controversial wine by the glass program.

Do you feel like a "gatekeeper?"
I don't think anyone is a gatekeeper on purpose. You have to understand that the reservation process is designed to maximize what the restaurant can do. No one ever wants to say no. As a business, especially a restaurant, we want to accommodate as many people as possible. The role is just trying to be smart about how many reservations you can take a night, not overwhelming the space or what you are capable of serving.

From the outside, your reservation process is pretty simple: there are no online reservations; the only way to reserve a table is by calling. Can you explain why you opted for that system?
It was never a decision — we had no choice. The reservation system both at Ribelle and at Strip-T's currently depends on pencil and paper. It may seem primitive, but it does allow us a lot more human interaction. Both restaurants are small, so this system works without detriment, but it certainly takes a lot of erasers. 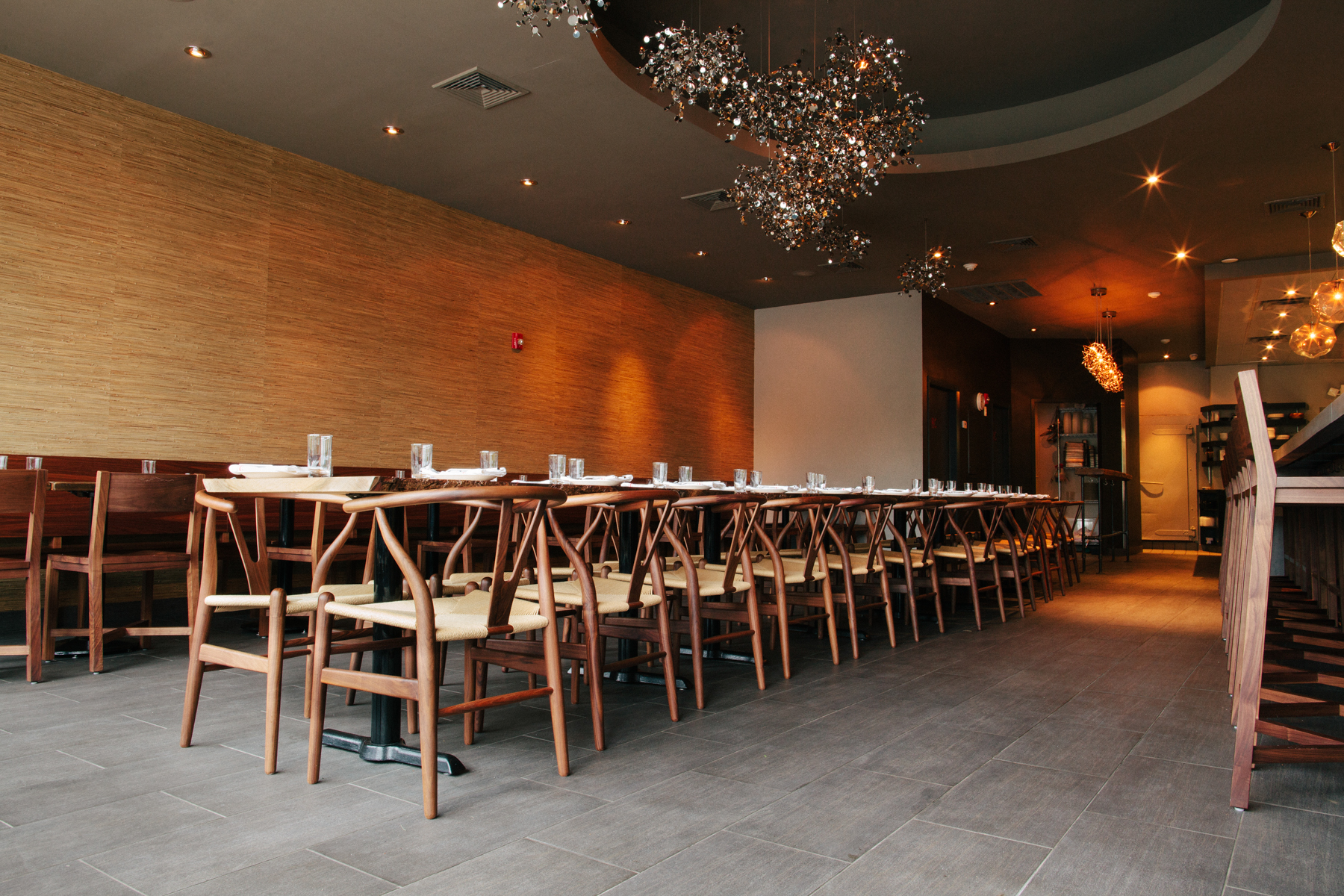 [Photo: Nick DiNatale]
How has your approach to reservations changed since Ribelle opened?
Originally we were not going to open with reservations at all. It was a thing Tim and I went back and forth about for a very long time. Eventually, he conceded with reservations available only for the very beginning hour-and-a-half of service. That's how we opened. It was a little tricky; it took time to explain. Since then, we have decided to take reservations for any time during the night and as far in advance as we can, which is about four to six weeks.

What is an average waiting time on a Saturday night?
It's not that bad, actually. The seats at the bar are always available for walk-ins, first come, first served. We make sure we always have at least a few tables that aren't reserved when we start the night so we can accommodate walk-ins. We have gotten pretty good atmestimating when the next available table will be, and we always try to be as accurate as we can.

Are there any challenges specific to Ribelle's reservations and seating?
Most of our dining room seats are communal, and we are very upfront with that. So when we take reservations, we make sure people understand that. "There's a chance you might be sitting with someone else." For the most part, it's fine. Sometimes people say funny things like "I hope they have good manners" or "I hope they don't eat my food" or "Maybe they will pay my check?" Very few people do not want the communal table, but when they don't want to do it, they are aggressive about it. We had someone call and say a communal table is "working class." I'll say this, though: when someone notable sits at the communal table, suddenly no one has a problem sitting there. It will be interesting to see how Valentine's Day goes. I hope people understand it's not romantic necessarily. We are not changing anything about our room or our service that night.

Any tips on getting a table at Ribelle?
Saturdays are usually our busiest service, but most other nights are fairly easy to secure a table. Calling the same day is actually your best shot since we do release a few tables day-of. 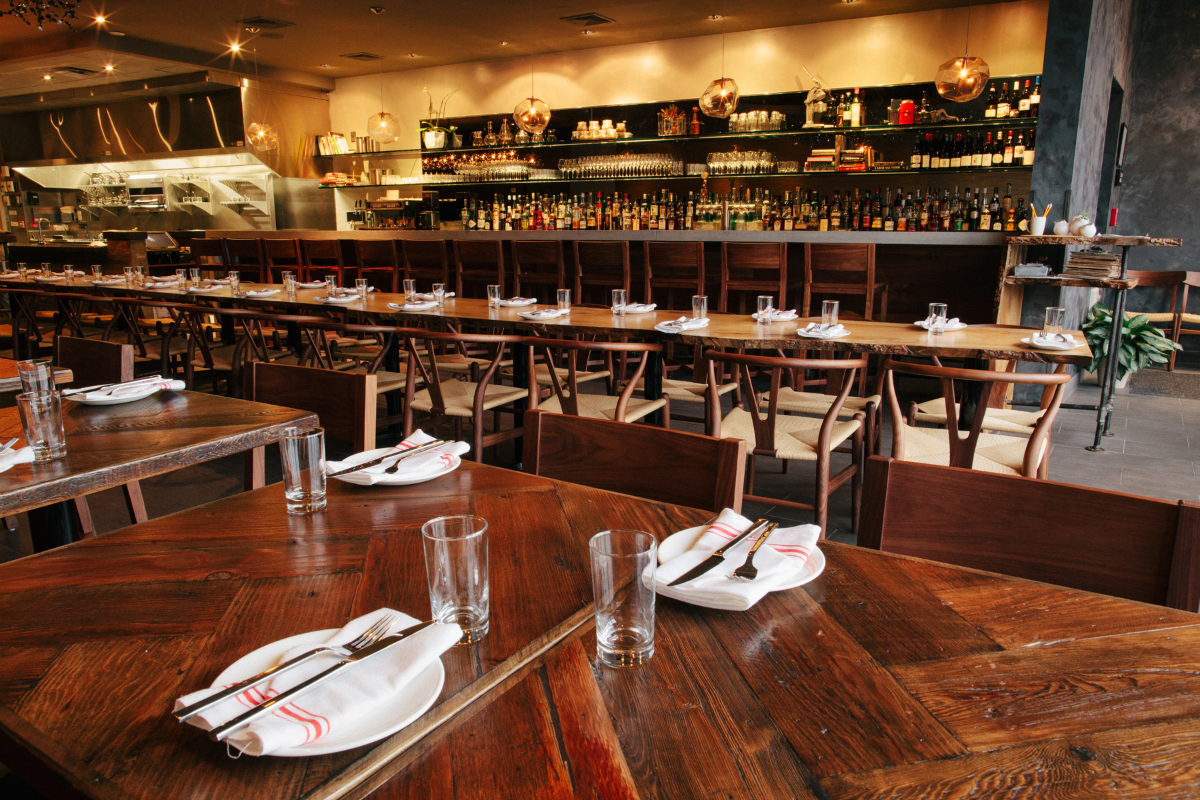 What happened to your late-night pizzas and subs program?
Late-night went into hibernation for the winter. It's something that's on our radar, because we all miss the pizza even though we eat it every Monday for family meal, but we are focused on getting brunch up and running first and foremost. We haven't given it up. Late-night started, and we realized that without the management that we have now, trying to execute a full week's worth of service, a busy Saturday night, and then another three hours of a completely different menu was just taking its toll on all of us.

Now that you do have a full team in place at Ribelle, do you plan on moving over to Strip-T's?
Definitely. Now that we have been open at Ribelle for five months, Tim and I are spending more time at Strip-T's, and we are probably going to end up splitting our weeks between both spots. We're happy with our management team at Ribelle, so we both feel comfortable stepping away. We just hired Eva Ramirez to assist me in the front of the house. She's great; she's going to lead the bar management team and also be primary service manager.

Any imminent changes to how Strip T's does things now that you are going over there?
Strip-T's is probably not going to take reservations anymore. I know — it's weird. Everyone thinks that they can't get in. They think Strip-T's is busy all the time, and it's not. And Tim is convinced that it has to do with taking reservations, so he's abolishing it completely.

Have you noticed any differences between Boston and New York in the way people plan their meals and reserve tables?
It's more widely accepted in New York to not take reservations. Here, I feel like people do want to have the security of knowing there is a table. Most people in New York don't have full-sized kitchens at home, so eating out every night is normal. Not making a reservation is normal. Being ok with whatever table is available is normal, no matter how cramped or uncomfortable.

What brought you into the restaurant and hospitality industry?
I moved to Boston in 2001. I studied at the Yale School of Drama, and I dropped out and moved to Boston. I needed to find a job. Banana Republic wouldn't hire me, so I got a job at the busiest patio on Newbury Street, and that's how I learned how to work in restaurants. Generally I love talking to people. One of the reasons why I love working at restaurants is because you get to observe lots of human behavior, and for every one hundred wonderful guests, you have someone who is more uncomfortable than most, and you deal with it, but you always learn from those situations. It's never the end of the world; it's just dinner. 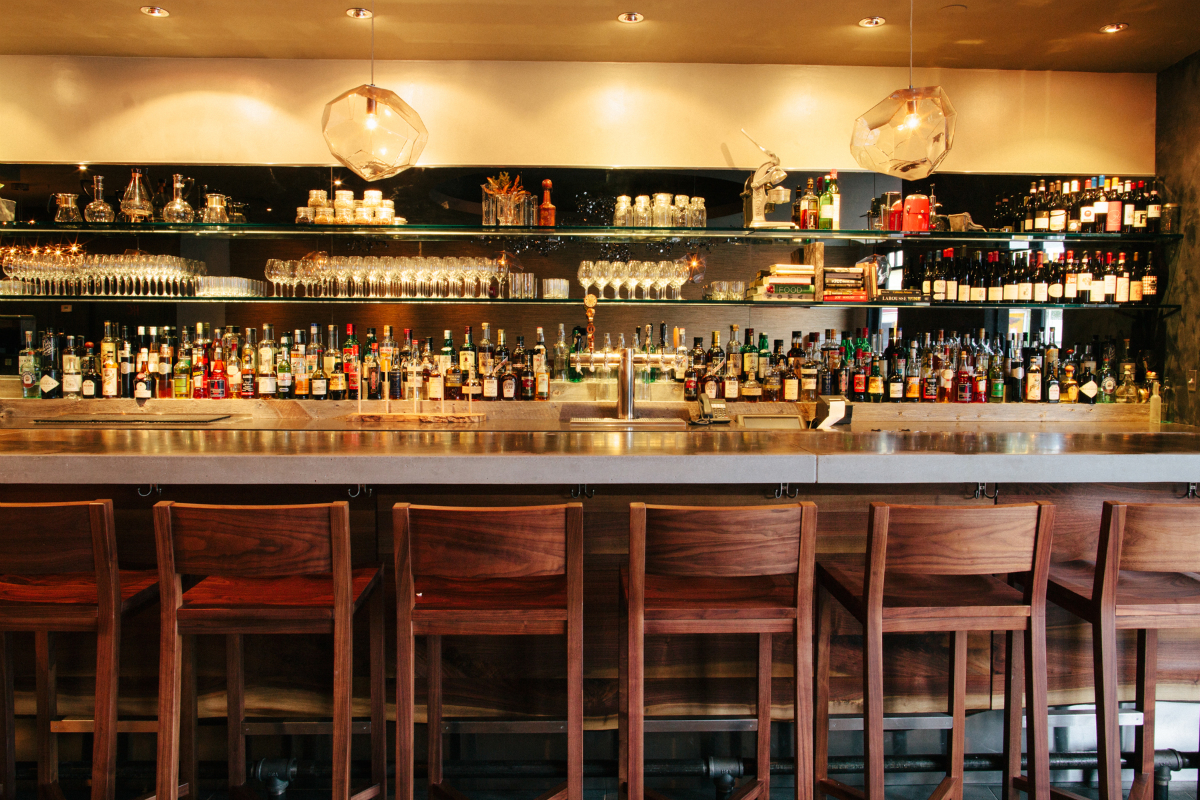 [Photo: Nick DiNatale]
How did you come to work here at Ribelle?
Tim and I worked together at Momofuku [Ssam]. We actually didn't overlap by that much time, maybe five months when we worked at Ssam at the same. And then he moved to Watertown, and I was coming from Cambridge, so I think we just always had that Boston connection, and he and I always maintained that communication. Ever since he moved back and started working at Strip-T's, he made it pretty clear that he wanted to work together, but without straight officially offering me a job. He's always talked me through really difficult problems and was there for me during my last days at Momofuku in Toronto. I accepted a job with Toro to open New York City with them, and I spent some months off in between, back in Boston. I was honestly just stopping over. I was supposed to go back to New York. Then I realized how much I love being here and how many friends I really did have. I just couldn't see myself in New York anymore. So, when I had that realization, I went back to Tim and said "Hey, how about now — do you still want me to work with you?" And he said "Yes!"

There was some confusion about who created the current cocktail menu; can you clarify that?
Matt Schrage did; he was our cocktail and bar consultant for opening. He's responsible for "From The Hip," which is awesome. He did all of the drinks. He helped us get open. He's currently making cameos at Ribelle for the next couple few Sunday and Mondays. It's nice to have him back in the restaurant, even if it's temporary. The cocktail program has transitioned in the last five months with our own bar team. Sean Woods, our head bartender, brings a unique perspective to flavor combinations, and Tim is getting involved in sourcing products and working out ideas. Just because you are a chef doesn't mean you can't play with all flavors.

When you opened, one of the thing that got a lot of attention right away was your wine by the glass list. Can you talk about what makes it different and why you structured it that way?
In the last year, I've done a lot of consulting work, and any time I put together a by-the-glass list, this is exactly how I do it. I will write down "OK, we are going to have three whites: one of the whites needs to be light and bright and high in acidity and super dry, one white needs to have residual sugars, and the third white should have some texture to it, maybe a hint of oak because people will want that." I write out descriptions, and then that's my shopping list. I just didn't flush it all the way out, this idea of doing Ribelle's list. I never completed the task of turning it into list. The result is that I've found that people have a more meaningful attachment to a description as opposed to a series of mostly foreign words strung together. I also think there is great value to be found in wines that are less familiar and featuring them by-the-glass with a description. I feel like I give the underdogs more attention that way.

Why do you think some people, mostly online, had such a visceral negative reaction to that program?
When we first opened, I spent a day in tears because of it. The wine list was never designed to try to trick anyone; I thought it was a good idea, and I wanted to see it in action. I've read all the threads; it made me second-guess myself, and it definitely hurt my feelings. Tim was great about it, very supportive. He always says, "Let's stay the course." I do pay attention to what people say, and in the beginning days of opening, sometimes online was the only way to receive feedback, whether it's good or bad. It seemed as though many of the negative comments were coming from people who hadn't even visited Ribelle yet. It doesn't seem fair to pass judgment without experience. It's hard for me to understand why people would get very aggressive about something that's as simple as fermented grape juice. Early on, I was definitely getting mixed reviews about the list, but with a few months under our belt and a staff with months of experience, feedback I've gotten is great. Like he said, we're staying the course.