Brian Poe on His Current Favorites

Share All sharing options for: Brian Poe on His Current Favorites 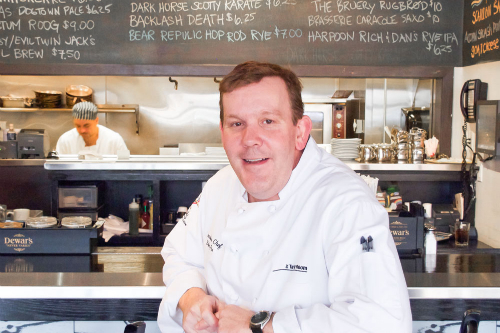 What's your current favorite dish in Boston?
I'm torn. I joke that I'm cheating on Estelle's whenever I go to Sweet Cheeks, but I really like the fun atmosphere there. I'm also a big fan of what Will Gilson is doing, and whenever I'm in Cambridge, I'll just stop in [to Puritan & Co.] and ask him what he's up to. I also enjoy The Gallows when I'm in the South End, and I am a huge fan of anything that Lydia Shire does. Mostly it's Scampo that I get to. It's fun with the three neighborhoods that I work in, because I get to stop in at these places regularly. There isn't necessarily one specific dish at a specific restaurant; for me, it's just more about what other chefs are doing in general. I can't wait to have some time off and spend more time in Cambridge and Somerville. There's just so much that has opened up and so much great talent. I especially can't wait to get to Sarma, The Kirkland Tap & Trotter, and West Bridge.

What's your current favorite ingredient to use?
Mostly I love doing the type of food that I grew up with and then adding a twist. At The Rattlesnake, I like to take French food and make it spicy, and at Estelle's, I'm making Southern-ish and homestyle food with New England ingredients. At the Tip Tap Room, things are completely different; I'm working with ingredients like ostrich and giving it an African influence. In the office, I have a world map, and I just sort of stick pins in and say that I want to go to a certain place on a certain day. So the goat could be from India or Africa and so on; there's just such a big reach.

There's also a lot of movement with my menus, so it's hard to pinpoint just one ingredient, but one area we've really been focused on is the beer. We have a great beer guy that we call "the minister of foam." He's just so smart when it comes to beer, and he educates us, and then we taste the beer, and then we build dishes around that, or vice versa. One of my bar managers recently tasted one of the beers and jokingly said that it tasted like raking leaves and then coming in and having a beer and a ham sandwich, so we just went with it and built a dish around that. One of the things that I'm really working with is hops salt and learning to incorporate it into food so you really get those hoppy and earthy flavors. I've just been learning so much about beer and which ones are best for cooking. Some you shouldn't cook with at all because it will make the food taste like the pan but others make really great marinades. I'm not personally a hoppy beer drinker but I love playing around with the flavors of them. We have 96 beers under the three restaurants, and we take all of those flavors and really work to incorporate the food with the beer and vice versa. It's just totally opened up a new avenue for us to have fun with.

Where's your favorite place to go for food inspiration?
I was thinking in depth about this, and I think for me, it's just a map and then the weather. I look to the map for inspiration and then the weather, which changes so frequently here, to see what makes sense. When it's really cold out, I like to make heartier stews and comfort food and things like shrimp and grits. I also just got married, again, and to the same woman. The first time was inexpensive, you know — some champagne and some family. This time, we went to Brazil. I had been a couple of times before, but it was so great to see it from her eyes. You know, there are the usual, obvious things like feijoada that we had, but we traveled all up into the northern part and then down to Rio de Janeiro, which I had never been to. There was this little spot, sort of like a gastropub, but it's similar to Clio and and it was just so cool. It was so hidden but really incredible. I think we ordered one of everything on the menu.

I've also a huge fan of Alex Atala; he's the big guy, sort of the David Chang of Brazil, if you will. He's one of the top five in the world, and he's just taking things like okra and making them so advanced but so simple at the same time. I have his book, D.O.M.: Rediscovering Brazilian Ingredients, and I love just curling up with a glass of wine and thumbing through it. It just opens the mind up to thinking about things differently. The things that he does in his book are not things that work in a commercial setting, but I just love the way he's thinking about ingredients and just making them very unique. I also really like Daniel Patterson and his book, Coi: Stories and Recipes. I get a lot of beautiful inspiration about the story of how he cooks.

I really love to look to places like California and Brazil for inspiration; I only wish we could have weather like that here. I also embrace and reach out to places like France and Spain, and it's just so cool being able to have that freedom to play.

What is one of your favorite food memories?
The most trouble that I ever got into — well not trouble, but you know — my grandmother was at her house in Georgia, and she'd baked all these apple pies. She had made several dozen pies for something, maybe a family event, but everyone went to take a nap, and I somehow snuck up on a ladder and went around to each one and ate all of the crust. That sort of goes back because even though I got into a little bit of trouble, that moment still strikes a chord with me today. And, if I could, I'd still go back and do it again today, eating every damn crust.

What are your favorite dishes currently on the menu, and what are you most looking forward to doing in the near future?
This year has been an interesting year because we've been cold, then warm, then cold again. I can't say that there's one favorite, but at Estelle's, I love our fried chicken and the duck etouffee. At the Rattlesnake, I'm way into carnitas now. At Tip Tap, we're being a lot more focused about our marinades and how we're doing it. We're just in the process of refining our process for marinating, which we do for 24 hours, and then we're looking at the spice rubs that we use right before it hits the grill. We're just constantly revisiting what we're doing and constantly coming up with different ways to get flavors deeper into the food that we're making. We're also constantly trying to improve on our dishes and make them better and constantly grow.

I've also done a lot of growing up lately. It's tough getting feedback, and sometimes it hurts. It doesn't hurt as bad as I grow up, but it's tough because it's like they are talking about your child. But we look at it and think, what we can do? So you drop your guard and look at it and ask, what can I do to make it better? It's just a very happy place to be as a chef.

What is your favorite thing to cook at home in your (limited) spare time?
I love cooking at home. That's the one time that nobody's looking. I can kick back, have a glass of wine, and cook for my wife or some friends. I can totally relax. You know, [laughs] I can get a little buzz going, accidentally burn something, and it's okay. Nobody knows. I just start over again. Dinner can be ready at 6 or midnight and that's just fine. On my day off, I can just take a deep breath and relax and just work with what I have in front of me. And lucky for me, my wife likes it and just goes with it.

Scampo at The Liberty Hotel