Looks like Neptune Oyster isn't feeling the love for its neighbor, Pauli's, a sub shop that declares itself "wicked fresh" and "crazy good" and serves dishes like "lobsta" rolls, "lobsta" subs, and "lobsta" mac & cheese. Pauli's is now offering the USS Lobstitution, a lobster (er, "lobsta") roll it claims is the biggest in New England with "a whopping 24oz. (1 ½lbs) of prime knuckle and claw meat" for $50. But Neptune Oyster chef Michael Serpa, whose own lobster roll is one of Boston's most iconic dishes, isn't a fan. "The North End would be amazing" if people were "creative and original," he tweeted. Creativity apparently doesn't include making a huge lobster roll and giving it a silly name. 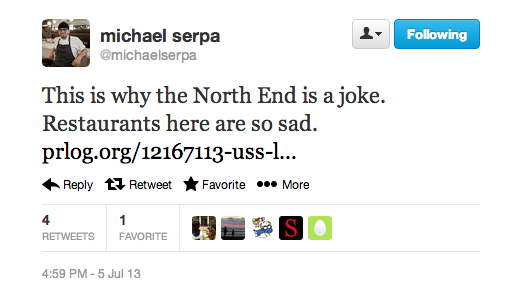 "This is why the North End is a joke," tweeted Serpa, with a link to a press release about the gargantuan roll next door. "Restaurants here are so sad."

"Neptune succumbs to neighborhood competition and now offers a 42 oz lobster roll on a full brioche Pullman loaf for $162," he continued. "Muppets." Another Twitter user helpfully dubbed this hypothetical roll "The Big Lob-owski," while another asked the important questions on everyone's mind: "Can I supersize that with a 64oz Diet Mountain Dew? And does it come with chips?"

Can a tacky stunt lobster roll and a well-loved, refined lobster roll live side-by-side in harmony, or is the North End not big enough for the both of them (as well as the countless others in the neighborhood?) Does size matter? If an even bigger lobster roll exists, what should it be called? 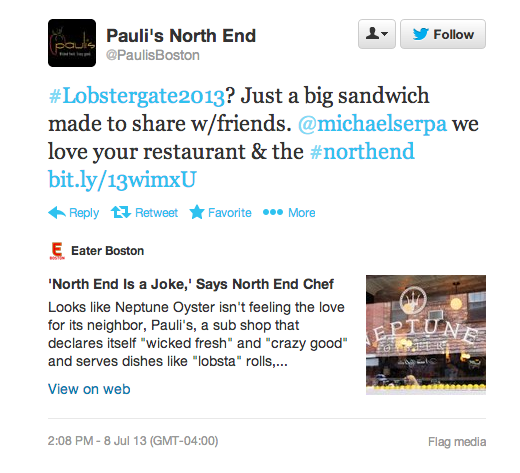