Rob Delaney on the Tragic Demise of Brigham's and More

Share All sharing options for: Rob Delaney on the Tragic Demise of Brigham's and More 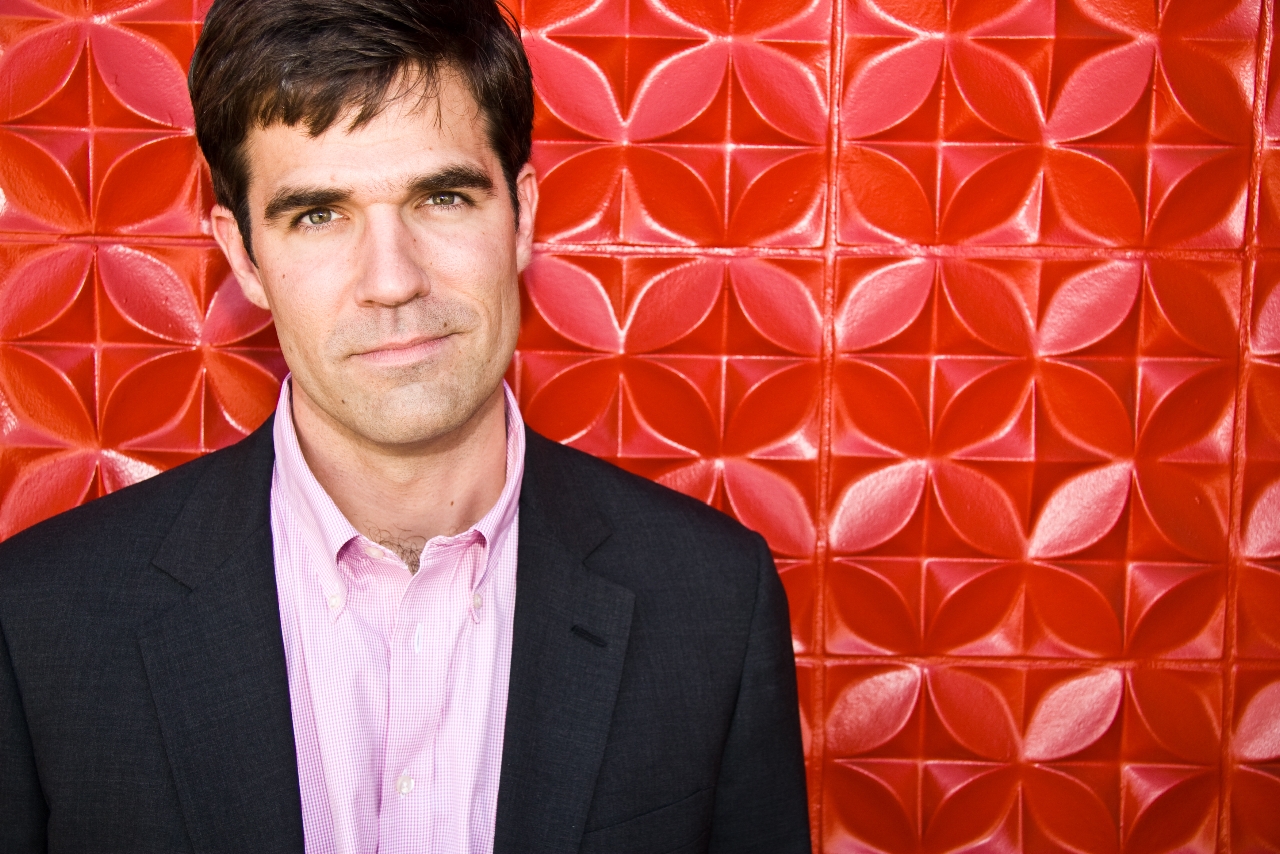 Comedian and writer Rob Delaney makes his home in Los Angeles now, but the Marblehead native has plenty of love for classic Boston chains, like Brigham's (especially Brigham's), Pizzeria Regina, and Dunkin' Donuts, which, lucky for him, is expanding out to LA. Delaney is bringing his routine to the Wilbur Theatre tomorrow night, and he took a quick break from joking around with his nearly 900,000 Twitter followers to chat with Eater Boston about how a couple Boston celebs should be bailing out Brigham's, where he likes to eat when he's in town, which local food he'd want named after himself, whether chefs should try not to be jerks on Twitter, and more.

Growing up in Marblehead, did you have many opportunities to get into Boston proper?
Oh, definitely.

Any favorite Boston restaurants from back in the day?
A lot of them are gone. You know, mostly I think what this article should be about is Brigham's. The final stores are closing up shop, which I'm irate about. I can't believe Ben Affleck and Matt Damon are letting this happen. I mean, I know Ben Affleck has been, like, bringing water to the East Congo in Africa and stuff, and that's great, but I think maybe someone with a passion can afford to help Brigham's. I can't afford personally to do anything about it — I have two young kids and don't have that kind of money — but it is Brigham's, and I'm very angry.

Yeah, I used to go there after dance recitals all the time as a little kid.
My dad worked there when he was a teenager. I would go there regularly with my mom and get sundaes, go with my dad and get raspberry lime rickeys, so I'm upset about that. I mean, what's next? Are they going to close Regina's?

Let's hope not. Where do you like to eat when you're in town now?
I go to Durgin Park frequently when I'm back. I love that restaurant. When I'm doing the North End, I'll do Regina's, like, five times. Bertucci's is a fine chain, makes really good pizza. Probably my favorite local chain. Of course I drink coffee at Dunkin' Donuts, which I understand we're getting in LA. I drink coffee intravenously. I throw an ice cube in hot coffee and just pour it down my throat. Black, with no cream or sugar. What else do I like to eat when I'm home? A bunch of my Marblehead places are all closed now.

Is there much of a dining scene in Marblehead?
There was when I was growing up. I'm sure there is now, I just don't know. I eat clams at Woodman's of Essex.

Any places on your list that you've been meaning to try but haven't gotten to yet?
None that I can think of because I'm not, like, a foodie. I mean, I love food as much as any idiot self-appointed foodie, but I don't go to new places just because they're hot, or whatever. So any restaurant within the last ten years can go screw itself as far as I'm concerned.

How do you figure out what to eat when you're on tour? Are you just doing takeout, or what do you seek out?
When I'm on tour, I usually eat garbage because I'm somewhere I don't know. If I'm in a cool place like Nashville or Chicago, I try to get local cuisine. Most places have something that's worthwhile, but frequently I sleep when I'm on the road, I just try to catch up on that, so I often don't explore. In the South, I was fortunate to be able to get a lot of amazing barbecue in New Orleans and stuff. Very good food. And New York, of course.

Have you heard of the whole cronut craze going on in New York?
I've heard about it, but I haven't had one. They sound stupid, but maybe I would like it. I mean, if it's starchy and bread-based and bad for you, I'm sure I'd love it, but they're not calling out to me.

Are there any food trends over on the West Coast that you really love that you haven't seen make it over to the East Coast yet?
Well, the food truck scene out here is pretty fantastic, and please print that I know I'm an a-hole for even saying this word, but they do a "fusion" of different cuisines like Korean tacos, and barbecue within burritos and tacos and stuff, which sounds like an abomination in the eyes of God, but in fact, it's very, very good. Also, burgers in Los Angeles are really, really, really good. I think as the population moved West over the years, people's burger recipes picked up steam across the country and across generations, and burgers in Southern California are tough to beat.

So you've got In-N-Out Burger out there...
Yeah, which is fine, but it's a second-class citizen compared to a place called Apple Pan. I would fistfight in the street anybody who thinks there's a better burger in the world. And I'd win. And then I'd go get a burger at the Apple Pan.

Let's talk a little bit about Twitter and chefs, since you're so active on Twitter. We've had a few incidents lately of local chefs kind of offending people on Twitter and then having to deal with the fallout, like a North End chef who called the North End a joke and insulted his next-door neighbor. Do you think that a chef's online persona should play a role in where people decide to eat? Should chefs realize that they're the face of their brand and tone it down, or should they just be free to be themselves online?
I mean, I don't care if a chef is a jerk. I've worked in restaurants — most people have — and I think the stereotype of the jerk despot chef is pretty rooted in reality. Like Gordon Ramsay yelling at people — that's not an anomaly. That's not weird. Plenty of people do that. Plus, I think it's funny to insult whole populations of people. That would endear him to me. If the people who got upset about him saying that — here's a little Twitter and comedy insight — they didn't really care that he said that; they just felt like getting up in arms and they want to whine about something. No one generally lost sleep over him doing that. So I think it's fantastic when people shoot off at the mouth on Twitter and embarrass themselves, and I enjoy the fallout.

Here's a cheesy one for you. If a Boston chef were to create a dish in your name, what would be in it?
I know you can't improve on it, but if Pizzeria Regina — and I mean, I'm not worthy of this. I'd have to, like, cure leukemia or something to earn this. But the Giambotta pizza, I believe it's called, at Regina's — it's their version of a supreme with everything on it — and that's my favorite thing to eat in Boston. So if they wanted to call that, like, Rob Delaney's Giambotta, I'd try to stop them, I'd say this is a very bad idea, I don't deserve this, and you're going to be the laughing stock of the community, but I wouldn't fight that hard, I guess.

Can you think of anything bizarre or funny that has happened to you in a restaurant?
I remember one time I took a girl on a date in Harvard Square, and the maitre d' tried to seat me sitting next to her so I could see out into the square, and I said, "No, I want to look at her" — the girl whom I was going on a first date with — and the waiter and the couple at the table next to us were like, Awww, how romantic. I didn't mean it that way. I just meant, How will we talk? But it made me seem like a really good, romantic person, so I just was like, Oh yeah, that's what I meant.

Let's end with a very important food question. Mayonnaise: for or against?
I love mayonnaise. Absolutely. I lived in France for a year, and people would put mayonnaise on their fries there. So I started doing it, and ever since, I've been eating fries with mayonnaise exclusively, and if there's any mayonnaise left when I'm done, I'll lick it up. I'll slurp it up. I love mayonnaise.

There's a definite divide in the world between mayo lovers and haters.
Yeah, I know it's gross. It's indefensible. It's disgusting, but I love it.

Want to close with anything about Friday's show?
Come to the show! It's almost sold out now. Please do come. It's a little homecoming for me, and I'm excited to do it.

Rob Delaney performs at the Wilbur Theatre tomorrow, July 26th, at 7:30pm. Purchase tickets here, and follow him on Twitter at @robdelaney.
· All coverage of Comedian Confidential on Eater [~EBOS~]